I try to yaw tune my 3kg quadcopter with 15 inch props. It has almost no response on yaw and moves only a bit. Almost impossible to fly by using yaw. Pitch and roll works good. I tried to tune by using Autotune which had no effect and manually I do not know where to start because the behaviour for yaw tuning is slightly different from pitch and roll.

Could somebody please give me some values I can start with for more responsible yaw movement?

I read that bad yaw response can be caused by compass problems. Can you plese check if this is the case?

Log file from Autotune flight for pitch and yaw. 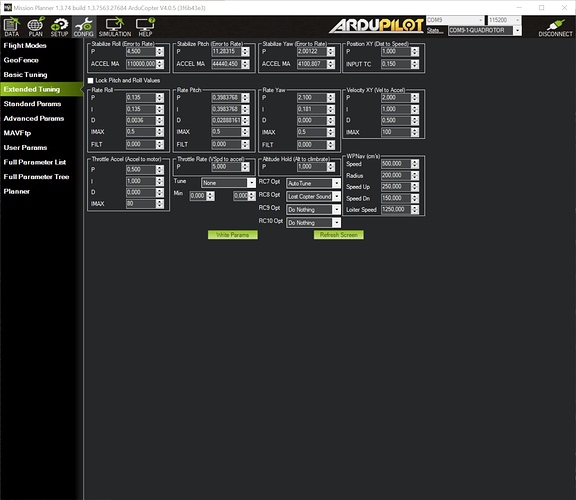 This isn’t being caused by a "bad " tune.

The reason you have no Yaw control is because the motors are WAY out of mechanical alignment. This means the motor/prop thrust lines are not parallel to each other. This causes the motors to “fight” just to maintain heading. 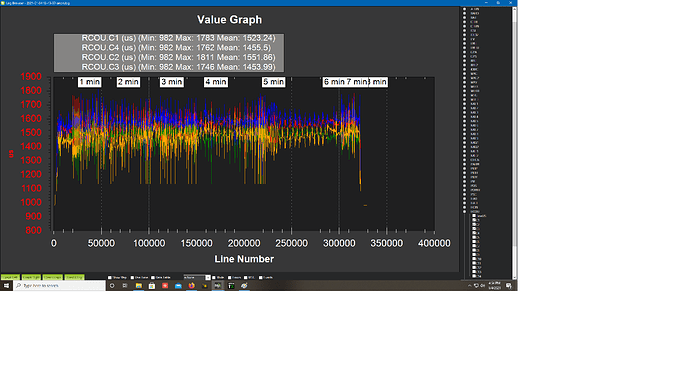 Look at the RCOUT for the motors. Ideally they should be laying one on top of another, but you can plainly see they are spread out…

I am also thinking the aircraft may be unbalanced about the roll and pitch axis.

What I really need to see is a DETAILED parts list of EVERYTHING including their individual specification on the aircraft; motors, ESCs, frame, battery, payload, EVERYTHING.

What does this frame look like that you have Frame_type 2 (V) configured?

There is something off about this. As your RCout graph shows the motors are thrashing. The CTUN>THo is cyclic also so it’s being driven. And the Yaw Rate P and I terms are crazy high. Maybe because the atc_accel_y_max is so low.

I chacked the values again and saw that ATC_ACCEL_Y_MAX is only 4100 which is only 41 degree per squaresecond if I understood correctly but should be around 22000 following the Tuning Process Instructions from wiki. Maybe that’s one problem and the RC_out is a second problem.
Edit: okay @dkemxr was faster but thank you for the confirmation

Yes I also just saw the problem with the motors. This is really strange as the motors mounted diagonally have different values and not the front/rear or left/right.

What I can say about this:
-CoG is centered (Hung it on a string before the flight and rechecked by hand)
-Thrust vector is parallel. Since the motors are attached to 4-sided aluminum tubes, it is mechanically impossible for them to have a different thrust vector (as long as the tubes are not bent, which I checked)

But this explains why I noticed a yaw spin clockwise (top view) of a few degrees at take-off.

I checked the values of the frame where I had installed the motors before and I did not have these problems so it must be caused by the ESCs or some strange mechanical effect.

I will do the following

I think you get the best idea of the geometry of the frame from the CAD drawing. At the moment the battery is attached behind the FC bay and payload (empty batteries) in front. 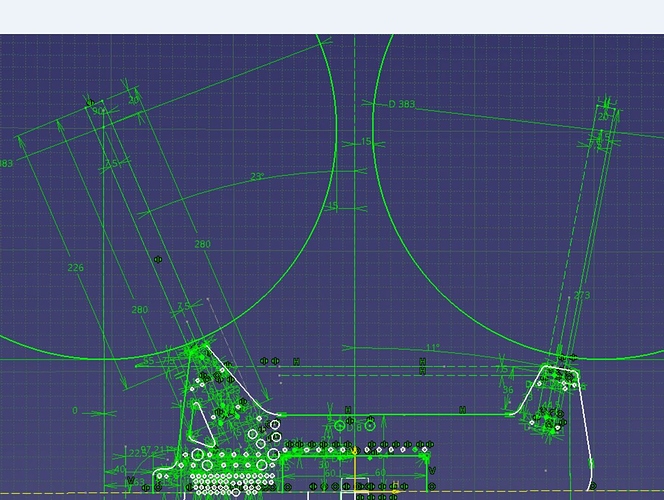 A screenshot from the frame where the motors were previously installed. 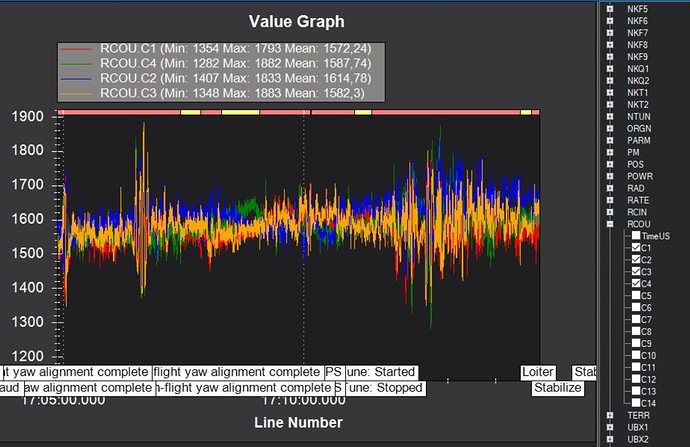 I would set everything back to default and then start with the suggested values from the Mission Planner plug-in (Alt>A) except for INS_GYRO_FILTER (leave at default). Run thru the dynamic notch filter setup and then run Autotune. But it was probably way off because the frame type was wrong.

That frame looks a lot like my H4 680. I used a standard quad frame type. 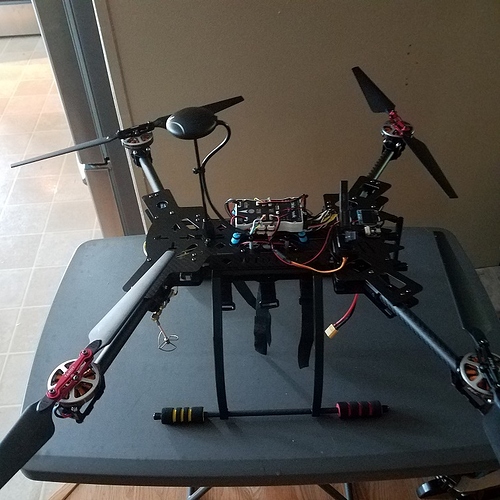 Yes is similar. Diameter as well. I have 720mm so only 40mm more than you. Can you share your PIDs? I have to wait until it stops snowing befor I can go flying again.

The best thing to do is follow the Tuning Process Instructions and then run AutoTune.

Sure I’ve done this before, but obviously not as accurately as I should have. I already found the problem and it was really just the ATC_ACCEL_Y_MAX value which was much too low. Now I can fly normally.

But I still have no idea what causes the torque that Motor 1 and 2 need a higher PWM of 100us.

The only thing I haven’t tested yet is if one ESC is different. I had replaced one RC Timer 30A OPTO with a DYS 30A OPTO some time ago. I thought they were identical in construction. Just saw that the DYS has BLHeli v13.1 and RCtimer v14.1

Could they have different performance? Do I need to flash the BL Heli FW? Is there any way to test them? Possibly via Ardupilot? I don’t want to spend forever swapping all the ESCs because they are soldered. Should I rather buy another RCTimer ESC and replace the one DYS or replace them all?

Is this the correct instruction to flash my ESCs or is there an easier way using FTDI or TTL board?
https://www.helifreak.com/attachment.php?attachmentid=499204&d=1396303742

But I still have no idea what causes the torque that Motor 1 and 2 need a higher PWM of 100us.

I fought with this issue on two different quads. Both have ROUND arms. The problem was the Tarot motor mounts were slipping.

The solution was switching to Aluminum Morot Mounts with a three bolt clamp. The third bolt goes through the carbon fiber arm and locks the mount in place.

I don’t use BLHeli ESCs on my big quads. I use Hobbywing X-Rotor 40A Opto ESCs.

I fought with this issue on two different quads. Both have ROUND arms.

I would like to say that this could be the case but it couln’t on my quad. I tried to find a reason for using round carbon arms but I could not find it (except the design). I tested the aluminium tubes and they are more stable than they need to be and I save a lot of weight because I do not need all the mounting screws (around 50 grams per arm)

I’m betting the frame is twisting.

Sure it does but how much is still okay and doesn’t it need aymetrical twisting to create such a difference?
I found a video of @OldGazer’s H4 frame. I have to check exactly but I would say the twisting is much less than that after putting 1kg at the end of one arm.


Also the frame in which the motors were previously installed does and there weren’t these differences.
charlesmarseille (Charlesmarseille) January 11, 2021, 3:19pm #17

Would you mind explaining why you don’t use blheli on big guys? I got 7 hobbywing 30A laying here (blew one on the octo). If you were me, you’d buy one more and use these guys or go for individual blheli_s?
In my experience, bdshot is just necessary in my fpv quads, night and day difference. I still have to try it in AC though.
Just say it if i’d better start a new thread.

or go for individual blheli_s?

One reason is for ESC Telemetry which typically requires BLHeli_32. But with some BLHeli_S ESC’s it’s possible to get RPM data via bidirectional Dshot. However this is still in development. The advantage of RPM telemetry is it’s a better reference for the Dynamic Notch filter than throttle position. And Dynamic Notch is in current Stable Arducopter so it should be a routine step in the tuning process.

Note: Nothing at all wrong with Hobbywing ESC’s, good qualitry stuff.

blheli_s esc can be flashed with jazzmaverick hex files to support bdshot. Is it harder to use blheli_s with AC than blheli_32?
Also, hobbywing dont support telemetry afaik.

Yes right, that’s I was geting at and have done that. It doesn’t work for all BLHeli_S ESC’s and it only gives you RPM. BLHeli_32 provides all telemetry.

I have some Spedix ESC’s that are BLHeli_S and bidirection Dshot works. These are on a larger quad with 320kV motors. I have other Spedix BLHeli_S ESC’s that I could not get to work. But others with the same timing have so it’s spotty.

But I agree with the assessment that Dhot does nothing performance wise for larger craft.