We have found a bug in Auto mode’s Takeoff command if the “Frame” is set to “Terrain” and the vehicle has a rangefinder (aka lidar) attached (and it is enabled for use in Auto because WPNAV_RFND_USE = 1). 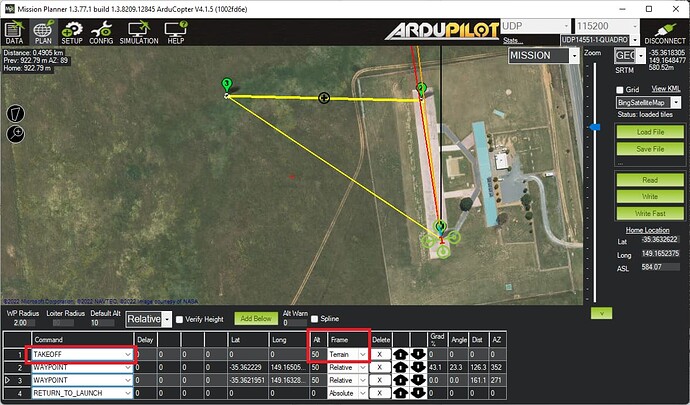 The bug is that while the vehicle is executing the takeoff command, if it climbs above rangefinder’s range the Terrain Data Failsafe will not trigger as it should which leads to the vehicle continuing its climb until the operator re-takes control (aka a “climb away”).

This issue does not happen if the Takeoff command’s Frame is set to “Relative” (the default) or “Absolute” nor does it happen if there is no rangefinder/lidar attached (because then the vehicle uses the terrain database and this will fail before takeoff).

We are already working on a fix and this will be included in the 4.2.3-rc3 beta which will be released in the next day or two.

We have not actually had any reports of users hitting this issue but in any case, until 4.2.3 is released, please leave Auto mode Takeoff commands using “Relative” (or “Absolute”) altitude frame.

Just to be clear about which vehicles could be affected:

The fix for this issue is included in Copter-4.2.3-rc3 which will be available within a few hours of this post, thanks!