Copter-4.2.3-rc3 has been released for beta testing and should appear in the ground stations (MP, QGC) within the next few hours. The changes vs 4.2.2 are in the Release Notes and copied below. The highlighted items are new for -rc3 (as compared to -rc1/2)

All testing and feedback is greatly appreciated!

Do you have any document reference about this how does it works?

@rmackay9
Just checked in MP - still showing only rc2 as the available beta.
Yet I’ve noticed in the beta folder updated files on Saturday.
https://firmware.ardupilot.org/Copter/beta/

you can get to it using all options in MP thats how I had to get it.

@anon53993083
Thanks. Will try.
Have also checked in QGC and the only way I could work out would have been downloading the .apj file from the beta folder.
Just odd that despite it being officially the latest beta release that it won’t show up as such.

agreed if they would like folks to test beta it should appear under the beta tabs.

Sorry, something has gone wrong with the build server so the binary isn’t appearing as it should. @peterbarker is working on a fix.

@Karl_Schoelpple when using the all options be patient when loading all the boards on first load it can be slow, there are quite a few to load. It will also not show you RC3 or anything like that its the latest beta so that won’t show, for platform choose your FC. 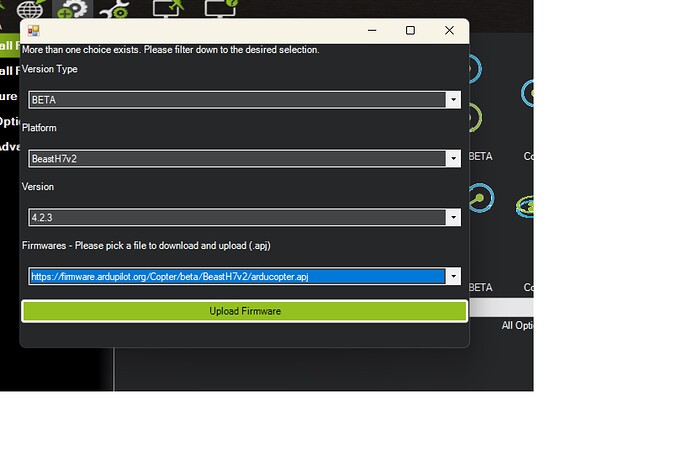 @rmackay9 no worries things happen. I have also noticed that there is a hwdef file for a pixhawk 1M bdshot in the code list is there any way that can be added to the board list as well? about to go fly a quick battery in rc3 if there aren’t to many folks in the park!!

OK! I’ve created an issue here to add the Pixhawk1M-bdshot to the list of builds.

@anon53993083
Thanks,
But it loaded rather quickly on my list.
As it happens we now have windy conditions and as only 1 out of 3 gyros is fully supported yet in my FC I’m not keen on doing much flying.
Just would have loved to do a few more minor tests, hover and basic stuff - most likely tethered for safety reasons.

Once all three gyros are fully supported I’m keen to do an auto-tune.

Re “Firmware ID and CRC check” we don’t have any documentation on this feature yet but I think it will be created during the 4.3 beta period. In short, this allows companies or users to only allow signed firmware to be uploaded to the board. The docs will hopefully spell out how users/companies can setup the signing keys.

Thank you very much for your reply @rmackay9

Well appreciated.
If you can guide me that how to setup signature verified firmware from current beta if possible?

I wish I could! :-). It’s so new that only Tridge and Sid know how to do it. I’ll ping them at tomorrow’s dev meeting.

did a quick test flight this morning saw no issues everything seemed great and solid. I will hookup Openid tonight possibly trying to make a nice case for it. I see the bluetooth signal once flashed but when I try and pair it asks for an app, I have yet to find the app anywhere does anyone know where the app is @tridge.
log

Thanks very much for the testing and feedback!

The OpenDroneID OSM remote-id app is linked from this bottom of this wiki page in case that helps.

By the way, it seems there is a small bug in the remote id code that could lead to the vehicle intermittently refusing to arm. Apparently if you try enough times it will work but FYI. We will fix this for the final 4.2.3 release (here’s the fix)

@andyp1per was kind enough to do the change so Pixhawk1M-bdshot will be available in the future. I’m not sure when/if we will 4.2.4 but if we do it should be included.

@rmackay9
Just a shame I can’t get the gyro driver issue on the Pixhawk6X sorted.