Hey guys,
I was performing a flight with our 8’ VTOL airframe, we have four hard-mounted VTOL motors on the wing booms and one pusher motor. This airframe has always flown perfectly, and nothing was changed in between a previous successful flight and this flight.
The takeoff was uneventful, the aircraft then transitioned to fixed-wing. After transitioning, the aircraft usually has a 10-15’ dip in altitude. This time, the aircraft made no attempt to pull out of the descent and went into the ground registering about 28 m/s airspeed and 32 m/s over the ground (GPS.)
We had two airframes with us that day, I sent the second one up after a long verification period, It attempted to do the exact same thing. Takeoff, Transition, and then dive. I was able to issue an RTL command before impact, and this is where is gets weird. Prior to RTL, the aircraft was exhibiting the same characteristics, perfect takeoff, but an uncontrolled descent after the transition. When RTL was initiated, the aircraft was about 20-25 degrees nose down, about 32 m/s airspeed, and 20’ or so off the deck. Once RTL was initiated, the aircraft pulled up, and flew perfect for the RTL maneuver.
What could be going wrong in the transition all of a sudden that would make the bird dive like this without any Q parameters being touched at all?

You should be looking for a control surface failure or other aerodynamic problem with this aircraft. The fixed wing tuning is not good, but the basics are it was flying at 30m/s with the elevator most of the way up and it did not pitch up. That has to be a mechanical failure of some sort: 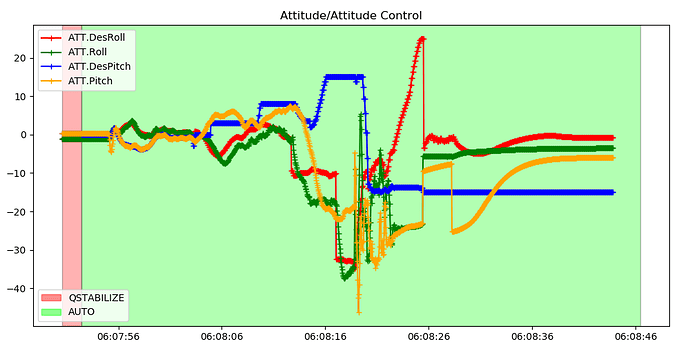 How are you powering the system?

Tridge,
Thank you for looking into the logs, I was thinking mechanical failure, but the fact that the second bird was able to recover from he same dive when an RTL command was initiated leaves me a bit suspicious.
As for the power settings, We are using a beta autopilot that we are still working some of the kinks out in regards to power delivery and monitoring. The servos are actually powered directly from the BEC’s of the ESCS rather than the carrier board. I had lowered the board voltage threshold to 4.0 due to some power issues we had with the first beta board.
We do not have anything in this bird that was monitoring current or voltage, just direct power into the cube with a voltage reduction circuit internal.