Tridge actually first flew this frame last October so my main goal was to confirm it all worked and also to ensure it was documented so after getting it flying, I also created a wiki page here to describe the setup and there is even a default parameters file for this frame.

One warning about this particular frame is the propeller mounts at the ends of the arms can break free allowing the motor to rotate 20degrees or so. This happened both to Tridge’s vehicle and to mine so it seems like a design flaw. A screw through the propeller mount and right into the aluminum arm was how I resolve this problem.

One interesting thing about this vehicle type is that we actually use the traditional helicopter firmware on it rather than the multicopter firmware. With its four miniature swash plates, it really is half way between a multicopter and a trad heli.

One interesting thing about this vehicle type is that we actually use the traditional helicopter firmware on it rather than the multicopter firmware. With its four miniature swash plates, it really is half way between a multicopter and a trad heli.

I haven’t seen one of those up close, but I imagine it’s pretty much a copy of Curtis Youngblood’s original design. Does this one use actual swashplates, or just collective pitch sliders like a conventional heli tail rotor?

OK, well one never knows. Seems to me Curtis built one with cyclic pitch with four 500-size rotors on it. But I think he also gave up on that concept

It isn’t obvious how you’d take advantage of cyclic pitch with quadcopter geometry.
Also implies either a lot of servos or some interesting linkages…

It isn’t obvious how you’d take advantage of cyclic pitch with quadcopter geometry.

Also implies either a lot of servos or some interesting linkages…

Seems to me it was an experiment for an extreme 3D machine that didn’t work. Curtis’ MantaRay eventually was flown with electric, gas and nitro power. But I don’t think he sold many of those. The bigger ones are definitely suitable for piston power for extreme flight times - likely the only practical method of applying piston (or turbine) power to a quadcopter:

It looks like there’s only one servo per rotor, so collective only?

I agree that this type of frame probably makes the most sense for gas powered quadcopters.

Here’s a close-up of the swash. 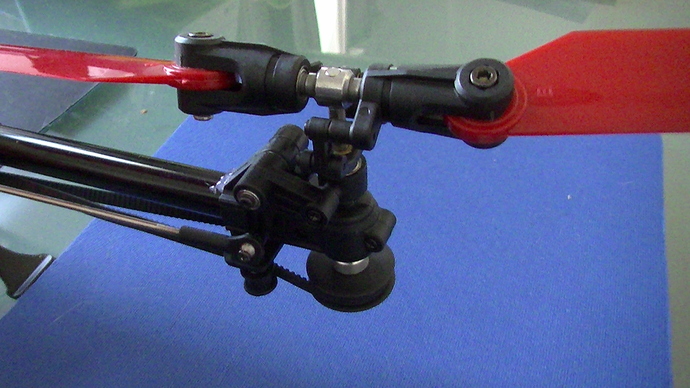 Here’s a picture of the hack I had to do to stop the swash/mount from rotating on the arm. Basically a screw through the mount and arm and then hot glued. 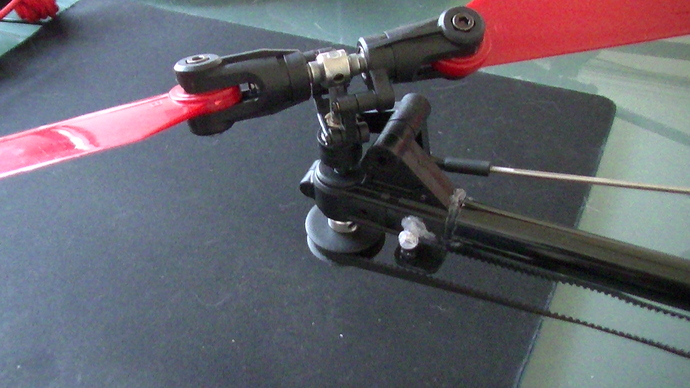 Those look like HK 500GT tail assemblies. I might be interested in building one of these as a future project, with piston power, to see if one could be build suitably robust so it actually lasts. 500 hours of flight time with minimal maintenance with a regular heli is trivial because the shaft, structure and bearings that supports the weight is massive and turns at very low rpm. The tail pitch assy is the single most maintenance intensive component on the whole helicopter, usually requires overhaul at ~150 hours, and it’s not carrying the weight of the machine.

The second challenge would be designing a frame that eliminates flexing and still have decent payload capacity. Which is a common problem with multicopters as compared to heli’s carrying heavy payloads.

I can think of a couple applications for these with piston power where they could be used instead of heli’s due to the safety issues and pilot training requirements inherent with helicopters.

I also tried flying the WLToys V383 with pixhawk the cube and your suggested paramters.
It flew pretty descent with rapid shaking at roll axis mostly while landing and before take off but also half of the time at hovering.
I changed the ATC_RAT_RLL_D from 0.0008 to 0.0007 and the P term from 0.095 to 0,080.
After that the quadcopter is flying very good at stabilize mode.
But i tried loiter and automission and it was a huge disappointment. Both in loiter and automission the quad could not hold its position good and was drifting even 3 meters away from where it should be.(without shaking). Both the same here GPS and cube pixhawk was tested in the same flying field in a tradition 450 electric quad and the drifting at loiter was less than 0,50 meters away.
Has anyone tried this WLToy at loiter and automission to compare results?
Thank you

It may be possible to make it work with the regular multicopter firmware but one of the main differences between the multicopter and tradheli firmware is tradheli’s handle negative thrust.

By the way, the tradheli firmware is 95% shared with the multicopter firmware … they two are very close to each other.