After using 4.0.1 for few flights, I observed that it feels like there is lag on RC input. One time I just ARMED the drone and it got the RCIN failsafe and it DISARMED immediately (so there was a >500ms pause on RCIN).

After looking on to the log files, the RCIN logging was looking like it is not logging properly. I disregarded that and started to diagnose the problem as hardware problem by replacing RC receiver and simplifying the setup as far as possible, with no help. I also tested it by having just cube + carrier board + receiver and I got the same problem. Later I started testing if the AC firmware has a play on the problem and I found that AC 3.6.12 and AC 4.0.0 works well and the RCIN is not stuttering/pausing. But when I reinstalled the AC 4.0.1 it started to stutter again.

See the RCIN values where there is an arrow. In this image there is stutters from 100ms to 200ms. 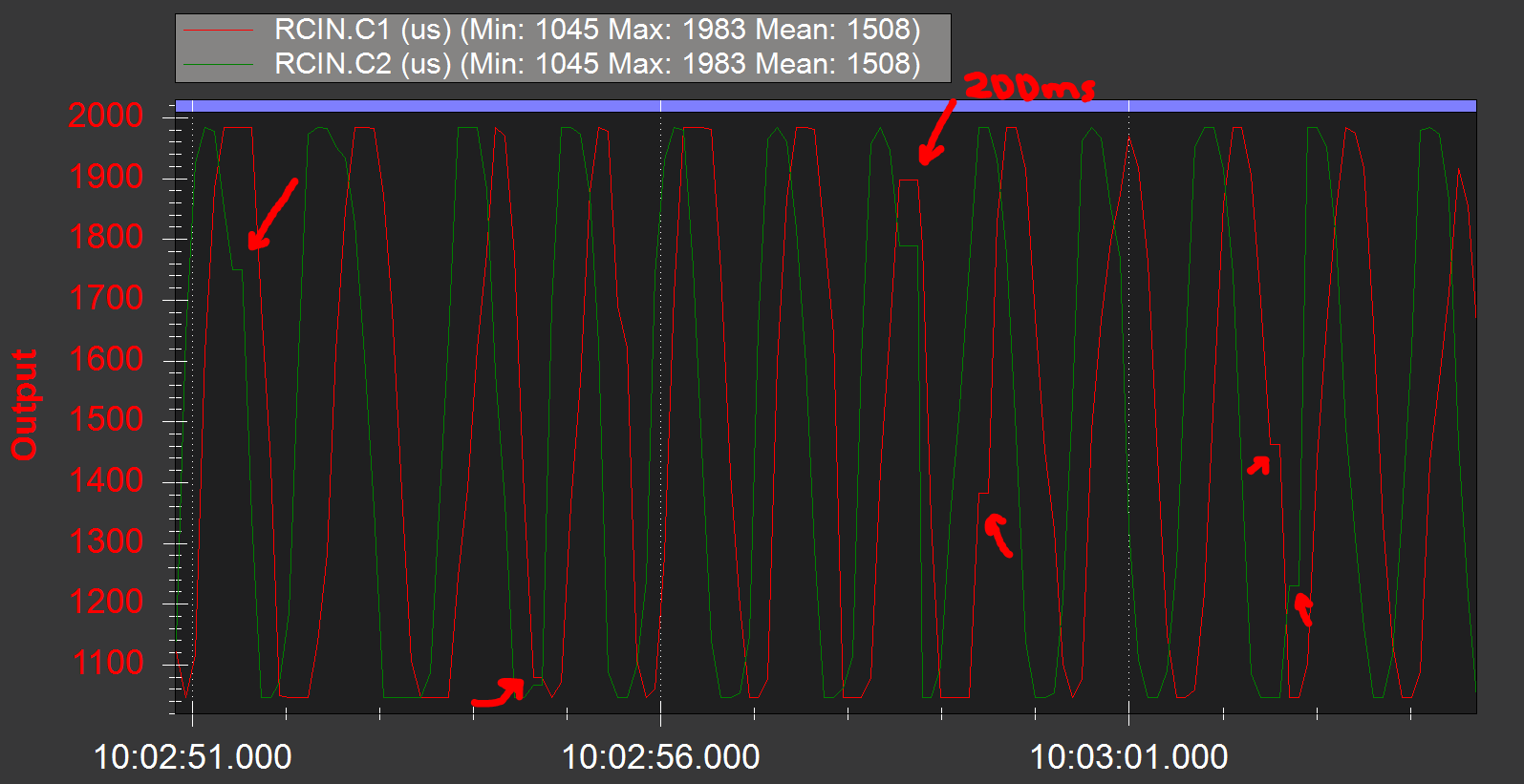 You can download the logs from there, and check using MP, which shows the problem more clearly.

Thanks for the report, I’ve added it to our Copter-4.0 issues list so it won’t be forgotten and I’ll bring it up on the dev call tomorrow.

just letting you know that I am working on this. I am modifying the IOMCU code to add debug pulses at key points then examining the timing with a logic analyser. I think I have reproduced the issue, but it is going to take some time to pin it down

I think the fix is to increase the constant 2000 at this line:


I think a value of 3000 will be sufficient.
you then need to rebuild IO firmware with Tools/scripts/build_iofirmware.py
I will be working on this more tomorrow
2 Likes
tridge (tridge) January 29, 2020, 2:29am #5

Here is a PR that fixes the issue:

Tested the firmware. No issue on 10 out of 10, about two minute tests each. I downgraded and verified that issue is still reproducible on 4.0.1 and then upgraded back to 4.0.2 sbus fix firmware and issue was no longer reproducible.
Also I didn’t notice nothing out of ordinary while testing.

I assume that using a test firmware could be risky, so I don’t do test flying.

I assume that test firmware could be risky, so I don’t do test flying.

not a really high risk as Randy has already flown it, but it depends on how expensive a vehicle this is

not a really high risk as Randy has already flown it, but it depends on how expensive a vehicle this is

Ok. Well it is relatively expensive, as it is built on custom CF molded parts and titanium frame. I think I will wait for next release candidate, if it is scheduled to be released soonish. Then it’s clearer what is included on that build.