As hobbyists, we (@walter and me) are not yet sure if we will build a three-engine Transwing VTOL. Therefore we first made a “proof of concept” model and want to introduce our considerations:

From our point of view, the main advantage of Pterodynamics Transwing VTOL is when hovering against the wind, the wing surfaces do not generate downforce but even lift! This is a unique feature, because all VTOL types with transition-stable fuselage generate considerable downforce when hovering against wind. But there is no light without shadow: A single pivot joint must hold the wing in place.

Since four motors are luxury for the forward propulsion anyway and to reduce the forces on the wing, we planned only 2 motors (one motor per wing). A third motor is therefore required at the rear, like a tricopter. The model is used to quickly change the linkage geometry and to test the control electronics.

The linear actuator is controlled by Arduplane using an ESC32. From Arduplane’s point of view the linear actuator behaves like a normal tilt servo. The ESC32 runs an Arduino Sketch, which is connected via Mavlink. The position of this “virtual” tilt servo is communicated to the ESC32 via Mavlink. The ESC32 now controls a real servo output on the Pixhawk via Mavlink, which control the brushless motor in both directions via DSHOT - BLHELI_32. Telemetry outputs RPM and current. The stop switching at the ends of the linear drive is done by 2 Hall sensors. 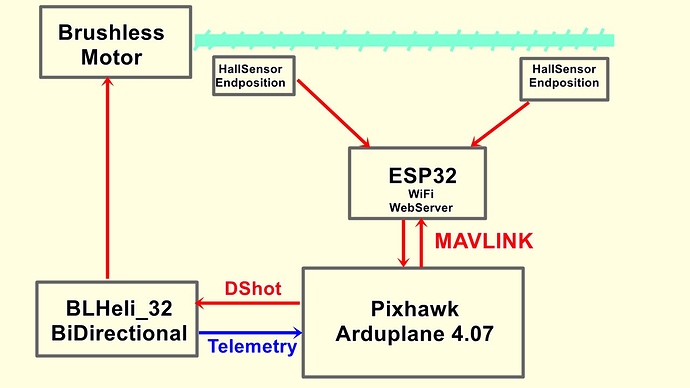 Thanks for showing your concept for the TMT. It reminded me of the CL-84 wooden tilt-wing mechanism from years ago. I saw Tridge’s SITL video just the other day on his Pterodynamics Transwing VTOL project. It is indeed a strange design. Good luck with your research!

I have been leaning towards designs with less mechanical complexity like a quadplane versus a tilt-rotor and snap-on wings or tail for tool-less setup and breakdown. The HEQ Swan K1 H-WING VTOL has excellent break down capability and seems to eliminate all mechanical control surfaces. We need a hobby-grade version that isn’t so expensive. Much like the Pterodynamics Transwing VTOL, these designs are meant more for commercial markets so your hobby version design of the TMT is very interesting!

Hi Greg,
Thanks for your remarks

It reminded me of the CL-84

I also had the CL-84 in mind, especially the tilt control via binary servo function. I just want to set Q_FRAME_CLASS to 7 (Tri), Q_TILT_TYPE to 1 (Binary Servo) and Q_TILT_RATE to the duration of the spindle run and will see how Arduplane controls the aircraft during transition.

Interesting, the HEQ Swan K1 H-WING VTOL is a QUAD X motor tailsitter ( https://ardupilot.org/plane/docs/guide-tailsitter.html#quad-x-motor-tailsitter )
You could build this from a Z84 by pushing a carbon fiber rectangle bar vertically through each wing. Let’s see.

Ahh, yes, the Copter Tailsitter configuration. I have thought about using the XK X450 frame. All the parts are available and inexpensive. My hesitation is in creating a design that does not disassemble easily like the HEQ Swan K1 H-Wing VTOL. Perhaps if I am patient, XK will design an inexpensive H-Wing for us. The X450 shown below has impressive performance and flight times for around $115 shipped. It can take-off both vertically or horizontally and flies very well but it is not autonomous. 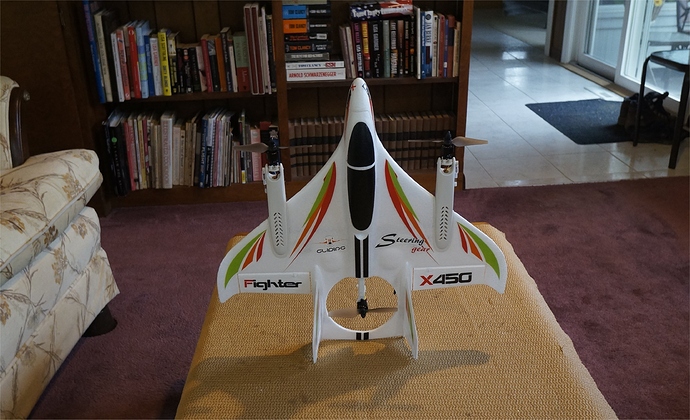 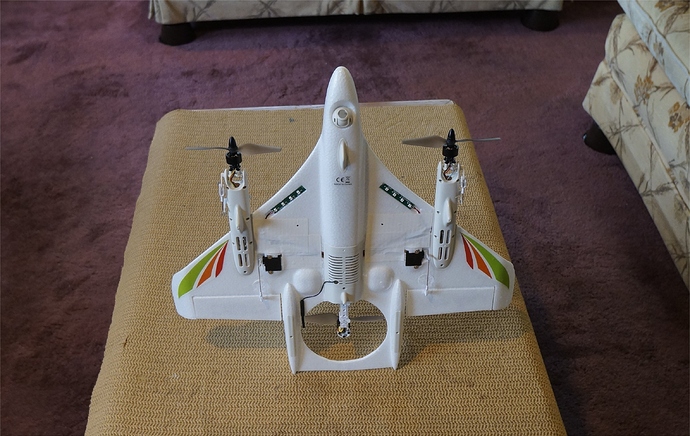 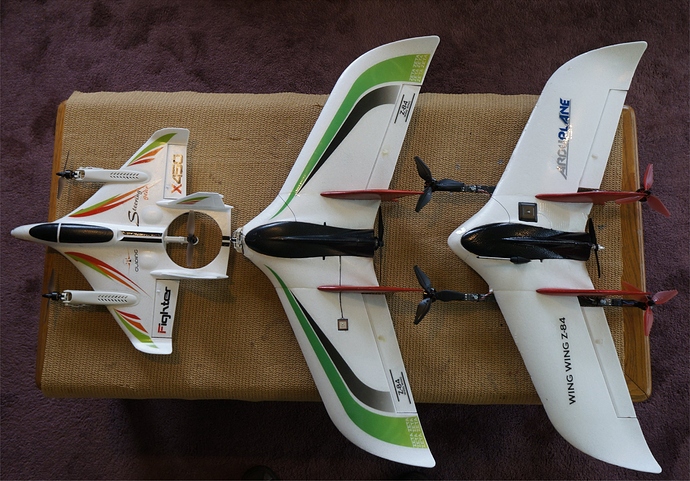