Yesterday we did the first complete forward tiltrotor transition. However, the motors do not get any power at the end of the transition. This takes so long until they have reached their final position.

This is problematic, as we need a slow tilt at the beginning of the transmission, so that the aircraft does not lose its height. Would it be possible to have two parameters ie Q_TILT_RATE_1 for the first, Q_TILT_RATE_2 for the second part of the forward transition ? After Transition, in FBWA mode, the behavior was great with default values. Unfortunately, instead of the reverse transition, we chose a cherry tree landing. Fortunately, not much damage has been made, and on the next flight, we will also carry out the reverse transition.

@Rolf, congratulations on the full transition flight!
Can you upload the DF log of this flight for me to take a look at?
Thanks!

@GregCovey, many months ago (in a galaxy far, far away?), I promised to do some more work on the CL84. You may have died of old age waiting, but I’ve finally done it.
What I’ve done is:

This is problematic, as we need a slow tilt at the beginning of the transmission, so that the aircraft does not lose its height. Would it be possible to have two parameters ie Q_TILT_RATE_1 for the first, Q_TILT_RATE_2 for the second part of the forward transition ?

we certainly could add that, I’d like to look at your log first if you don’t mind though. There should be throttle output while the tilt servo is moving, and I’d like to understand why you don’t see any.

I’ve also opened a pull request for the Q_TILT_TYPE support (which is needed for CL84):

answering some old msgs from this thread:

Is it possible that this exists if switching from QStabilize mode to FBWA mode?

when you switch to MANUAL mode in a quadplane you immediately lose all multicopter stability. There is a warning about this in the documentation, but I can understand why it can be confusing.
If you switch to FBWA mode then you don’t get this problem, and it should keep providing multicopter stability until it has completed the transition. With the fixes I just put in this transition completion will be at a fixed time for the CL84 if you have Q_TILT_TYPE=1, which tells ArduPilot that it is a retract type servo, and thus you can’t control the tilt rate.

Will try to upload the logfile this evening (UTC), but its 750 MB (2 minutes flighttime, more then 2 hours hanging in the tree. It took us several hours to recover the plane)

@Rolf, make sure up upload the .bin file, not the .log, and compress it (with zip or similar).
You could also pull out just the first few minutes of it - just truncate the file at 5% or so

@Rolf, thanks for the log, that helps a lot!

@Rolf,
The reason the throttle on the forward motors went to close to zero during the last part of the transition was that the aircraft was gaining height. Until the rotors have tilted all the way forward the multicopter controller is still in control of the rotors. The controller is being asked to maintain height - it is essentially in QHOVER mode as far as the multicopter controller is concerned. The vehicle was gaining height, so it lowered the throttle to try to stop climbing.
Cheers, Tridge

Hi Trdge, thanks for the fast respond. I have very well pulled on the elevator-stick, because the aircraft lost height ? 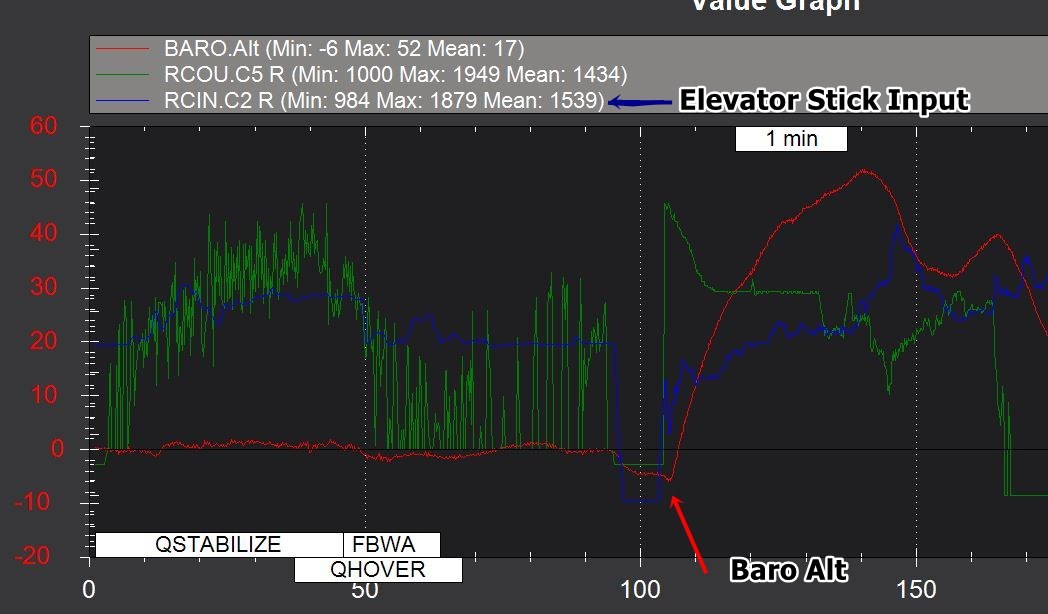 Hi Trdge, thanks for the fast respond. I have very well pulled on the elevator-stick, because the aircraft lost height ?

@Rolf, ok, got it this time, and it is a bug.
The vertical throttle in the “timer wait” part of the transition (when waiting for Q_TRANSITION_MS to timeout after reaching target airspeed) uses a stabilize throttle, not a hover throttle. It slowly lowers the throttle starting at the throttle it was using at the point it reached the target airspeed:
See:
https://github.com/ArduPilot/ardupilot/blob/master/ArduPlane/quadplane.cpp#L1057
In my pending tiltrotor PR I have changed it so it never lowers target throttle to zero while in the transition wait:
https://github.com/tridge/ardupilot/blob/pr-plane-binary-tilt/ArduPlane/quadplane.cpp#L1068
so it will keep stabilizing. As the fwd rotors are tilted forward, they will get a larger amount of thrust for pitch stability, so you will get more forward throttle in this stage of the transition.
Thanks for noticing this, and thanks also for not accepting my bogus initial answer!
Cheers, Tridge

thanks for looking again and fixing the bug. Important to know: Q-TRANSITION_MS ist starting after reaching target airspeed. Until we have the possibility to install a compiled version, we will try changing Q_TRANSITION_MS from 5000 to minimal ie 10,

Success!!
I’ve flown the CL84 tiltwing with ArduPilot and it flew very nicely. Did several manual flights with transition, then did 3 full auto flights (auto VTOL takeoff, auto-transition, auto-mission and auto VTOL land).
Unfortunately on the last auto-land one of the front propellers came off. Turns out the left/right props were mislabelled from the factory, so the nuts were self-loosening instead of self-tightening. It crashed hard when it lost the prop while hovering, but looks to be repairable.
I’ll post some videos later today.
Cheers, Tridge

@tridge: Congratulations and thanks very much. As soon as our aircraft is repaired, we will test the tiltrotor.

Here is a video of the flying today:


I’ll upload logs and parameters soon.
Note that I flew with a 5.2Ah 4S battery, which is much larger than the recommended 2.6Ah. It is a 10C multistar though, so lighter than a normal 5Ah
← previous page next page →