I’m posting this blog post as a branch from this thread:

Hi Mike and Trevor, I’ve put in a PR for tiltrotor support for plane here: https://github.com/ArduPilot/ardupilot/pull/4021 This successfully flies both a FiireFlyY6 model and a tilt tricopter quadplane model in SITL with support for automatic transitions, auto takeoff, auto landing, RTL, hover, loiter etc. I haven’t flown it on a real tiltrotor yet but hope to soon. I bought one of these: http://www.hobbyking.com/hobbyking/store/_85127__Canadair_CL_84_Dynavert_Tilt_Wing_VTOL_PNF_AU_Wareho…

That thread deals with tilt rotor support in Plane. A couple of us got to talking about a completely different topic of tilt rotor TriCopters. I’m working on a tilt rotor implementation of a winged Tri, based on these aircraft. I have two of these of different sizes built and test flown one with a Pixhawk, one with an APM2.8: 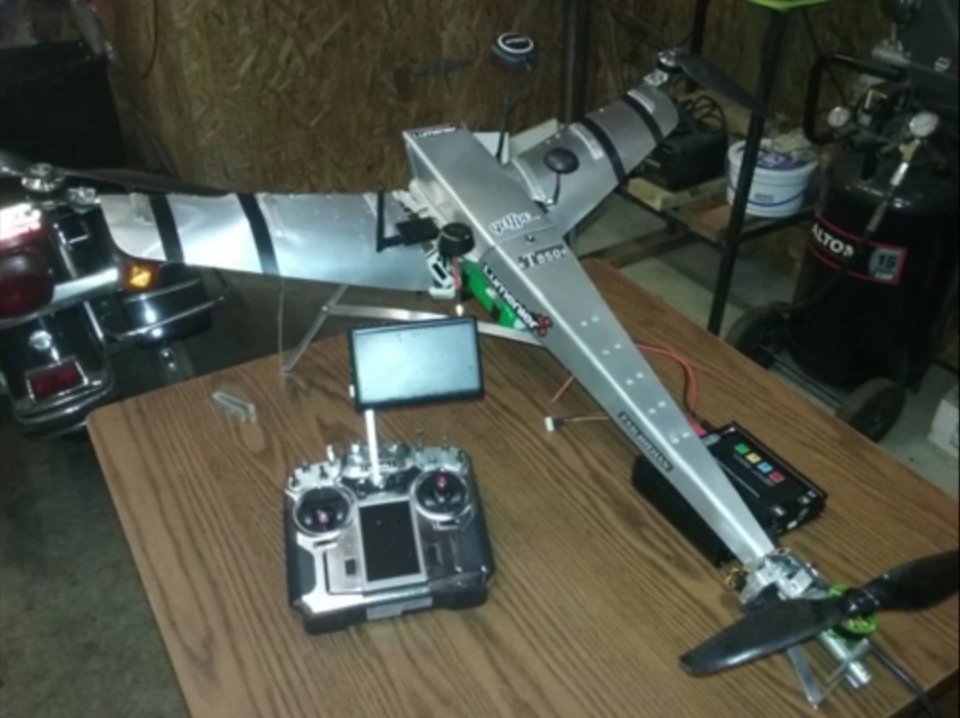 The current design goes from 19 amps in hover to 13 amps in horizontal flight @ 10 m/s, using fixed wing and rotors with the wing mounted at static 15 deg AoA and a forward pitch attitude of 9 degrees.

My goal is to design an airplane with VTOL capability, based on a winged TriCopter. Two different tilt rotor designs that I’m experimenting with:
1.) Add collective wing rotor tilt to the winged TriCopter design, using 30-40 deg forward tilt for enhanced horizontal flight performance. Based on testing I’ve done so far, should be able to be flown with Copter without the addition of any new flight modes, with seamless transition. Will only require some code for automatic rotor tilt as the aircraft transitions from hover to forward flight, and back.

2.) Use collective and differential wing rotor tilt, with full-ahead collective. Eliminate the tail rotor servo with the addition of conventional fixed wing control surfaces for horizontal flight. Will probably require new flight mode(s) for transition to horizontal flight, and transition could be somewhat hairy. Going to require a lot more development work, because vectored thrust Tri’s have never been done with ArduCopter (that I know about).

As I make progress, or have the epic crash testing it, I’ll post the relevant details here.

After several hours of fiddling and testing last night I came up with a method to automatically tilt the wing rotors forward, based on pitch attitude. My airframe design requires minimum 7-8 degrees of forward pitch attitude so the wing has the correct angle of attack, and the tail rotor has sufficiently “clean” air available for yaw and pitch control. 9-10 degrees of forward frame pitch is ideal. Testing on the bench, I was able to get a couple servos to go smoothly from trim setting (zero tilt) to up to 45 degrees of tilt by changing the airframe pitch from zero (hover) to 8-10 degrees forward. And turn the feature on or off, and adjust the maximum allowable rotor tilt angle at that frame pitch from ~10 degrees to 45 degrees, with a knob on the transmitter. And have it automatically return to <10 deg tilt (depending on how much max allowable is turned on) if the aircraft needs to land autonomously.

So I know that part will work, and it can be turned on or off with mission commands in the GS during autonomous flight, or manually by the pilot. It will require reversing direction of the props on the wing to better use differential vertical thrust vector, and differential torque, to maintain acceptable roll control in horizontal flight with the rotors tilted at 45 degrees.

Next is to build the bits and test it in flight That will take more time.

Hi Chris,
very nice to see the progress! How do you made it? Did you wrote some custom code or do you use the gimbal logic?
Sebastian

The main problem I see here is the low Reynolds number and the poor wing section. You hope for a CL of (EDIT:) around 0.7 which is close to stall for even the best low RE aerofoil, but I think you would need to work from some well known low re aerofoils rather than rolling your own out (forgive the pun

) of aluminium sheet and tube . You could start here:
http://www.charlesriverrc.org/articles/drela-airfoilshop/markdrela-ag-ht-airfoils.htm
Acording to my math, if you had an optimal wing section which I dont think you do, you get around 2.5 N ( In reality 2/3 of that as I am calculating an “ideal” lift with no tip losses) 2.5 N is equivalent to about 250 grammes of weight on a scale
Below Is my quick attempt at some Maths and guesses at dimensions

@skyscraper, the goal was never to get it to fly on the wing. Most multi frames will create a downforce when they tip to move, and power requirement increases. I wanted a frame that is either neutral or creates some lift as it moves forward. The wing is a regular Wright Airfoil, and it works really well and does everything I wanted it to. I got 52 minutes of flight time (to auto-land) from it with the LBCO set to 13.2 volts (4S) battery. It will only do about 31 minutes in hover.

It actually has a glide ratio when I cut the power from 120m altitude. I moved the CG forward until it would glide. Instead of falling like a rock I would estimate the glide ratio at 1:1 - it comes down at about a 45 degree angle. I can only do that for a little bit - I can yaw it with the tail rotor in a drop - but no roll control and I had it flip over a couple times when trying that.

@stundenblume, yes, I am going to use the camera gimbal tilt function to automatically tilt the rotors. It’s an experiment to see if it works. As it is right now, I have the prop directions reversed on the wing - that made a difference of ~2 amps in forward flight at 10 m/s and the wing motors turning 3,270 rpm vs 3,000 rpm with the directions reversed. They spin at 3,450-3,500 in hover. The wing is already acting like a thrust vectoring vane in forward flight with the prop directions reversed so the retreating blade is traveling over the wing from front to back, instead of the other way around. It remains to be seen whether or not tilting the rotors ahead up to 45 degrees makes any difference. It may make it worse, but I’m trying to get the flight speed up to 20 m/s for more range. Right now, if I try to fly it faster than 10 m/s the amps goes from ~13 to >20.

I spent the last week testing tilt rotors on my TriPlane, and did not have much luck. For whatever reason, the motors draw more amps the further ahead I tilt them. I went as far as 45 degrees and can achieve much higher flight speed (up to 30 m/s), but the amp draw is 35+ amps. I was tilting the rotors manually for testing, using a VR knob on my transmitter.

The combination of an extra 350 grams of weight in servos, tilt motor mounts and wiring caused the hover amps to go up to 22-23. And provided no advantage in forward flight at all.

The most efficient configuration I have found is to reverse the direction of rotation (from the ArduCopter documentation) of the wing props, leave the rotors at zero tilt, and fly at 9-10 m/s. My battery will put out 13 amps for 45 minutes of safe flight time with that configuration and gives me a range of about 16 miles.

It has been below zero here much of the week, and I made an insulation blanket for the battery for cold weather flight testing: 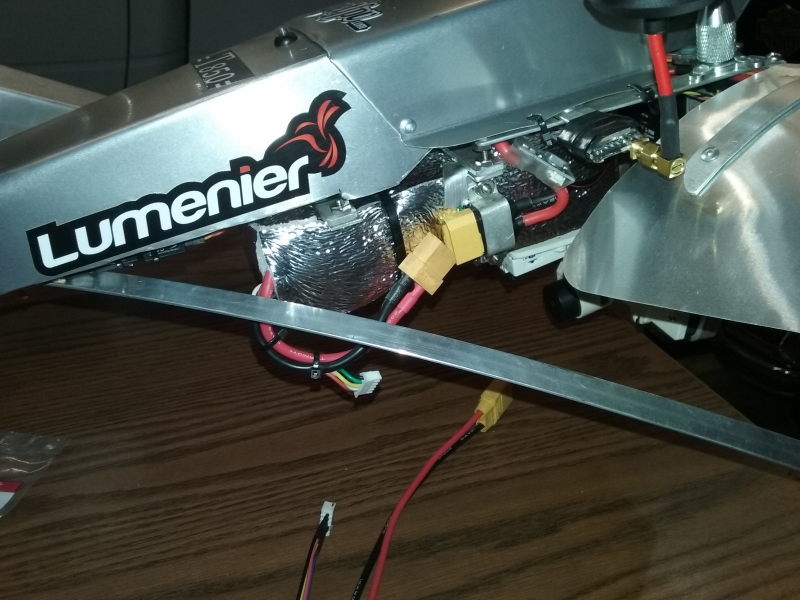 I gave up on the tilt rotor system on Thursday because I could not get the results I hoped for on this aircraft. After reassembly, I ended up with a resonant “buzz” someplace in the monoque aluminum airframe that I have to find and fix. And I have a problem with the gimbal shaking in cold weather from the air flowing over the camera at flight speeds > ~5-6 m/s. I never had this problem with the gimbal in warmer weather.

After reassembly I made a short test hop this morning and am back to the same results I started with. With the Pixhawk I am also getting a severe “jerk” passing each spline waypoint. I don’t recall having this problem with the APM. I made a video of today’s test flight since it was a little warmer here. I recorded the telemetry on my laptop from the tlog file after the flight, so the timing is slightly off between the real-time flight video and the recording of the telemetry data. But getting ~12-13 amps in cruise, I consider quite efficient for an aircraft of this size. And tilt rotors are definitely not the way to improve it. The tilt rotors only increase the airspeed. They do not provide more range.