Just setting up a new build. Twice now, soon after commencing autotune it loses thrust, drops out of the sky. Log link.

I used @xfacta spreadsheet setting for initial tuning parameters. I’ve set up other builds with all these same components except the motors; those are the new variable here (trying to say my initial starting tune numbers shouldn’t be wildly incorrect). I tried to pair components carefully (props/motors/ESCs are properly sized on paper) but this still seems like that sort of issue. Motor thrust on paper puts me in the 2.6 thrust to weight ratio (not accounting for “over enthusiasm” in t-motors reported thrust curves), but I’m still thinking that’s my problem here.

I am not sufficiently knowledgeable, however, to be able to extract the cause from the logs. What does one use from the logs to diagnose undersized motors/props? Looks like I’m hovering around 28%. My vibe never exceeds 10. I read in other posts to check the rcouts (mine are channels 7-10 fyi). One motor goes maxed out during the drop out of the sky, but not until (drop starts at 2min17s). Does that look like an individual motor problem or insufficient thrust overhead?

much thanks as usual!

One motor goes maxed out during the drop out of the sky,

This will trigger the thrust loss error. When the command is maxed out it can’t Stabilize properly.

Based on what criteria? You need to look at average RCOUT at a stable hover. 1500µs average is good.

Not terrible but still a bit low on thrust/weight.

A bit odd you have a Dshot protocol selected but the MOT_PWM_MAX/MIN are at default 0. Typically they resolve to 2000/1000 when you select that protocol.

I was looking at the ThO (throttle output) and ThH (throttle hover calc) fields to arrive at my 28% hover thrust number (I was hovering just before going into autotune).

Those are not linear with output. Best to see what the actual commanded output is.

And as an aside you can use Dynamic Harmonic (Option 2) for the Harmonic Filter. No lack of processing with that FC. Also, consider using the Bdshot target for that FC. Better reference for the Notch filter.

The motor being commanded to maximum output (and thrust loss warning) is a symptom of that motor/prop combo not producing the required thrust to maintain attitude. That could be from physical failure, electrical failure (large current spike or dip) or motor/ESC desync.
I havent looked at the log, but what ESCs have you got, and what BLHELI settings?

ok the discussion gave me some things to think about so I flew it again with much more attention on the basic motor behavior etc.

@dkemxr if I can get the thing stable I’ll mess with the filtering as suggested; you don’t think that’s related to my instability though do you?

I wanted to see if it was always the same motor that lost thrust, for troubleshooting purposes (it’s not) and just by observing it for a while it appears that I lack sufficient torque on the low end to give me the responsiveness needed for good stability. I have no idea how one can support that hypothesis with the log data however.

MOTORS: T-motor MN4004 300KV
(thrust curve in the specs on the t-motor site)
these motors look to have the thrust to do the job on paper, with a 2.6 ratio. Sufficient I would think. However, maybe the motor torque is too low despite the thrust? I don’t know how to calculate the required torque, but this is still my current hypothesis. The t-motor thrust curves specifically provide the numbers for a 15x5 prop (screengrab from the t-motor website below), so it was my impression that the props would not be oversized for this motor, according to the manufacturer.

given all this, here are some more questions for the experts:

the filtering as suggested; you don’t think that’s related to my instability though do you?

Hi Matt,
No, I don’t think this is a factor with the issues seen. Just some longer term advice to consider. Another bit for reference. You don’t need to set the SERVO_BLH_MASK and OTYPE for Dshot. Unless you are using other outputs in the timer group for standard PWM. Just the MOT_PWM_TYPE parameter is good. And consider the Bdshot target.

Turn off Low RPM Power Protect right away! I have found all other ESC settings at default to work for a wide range of Motors kV.

Will 16" props fit on the craft? eCalc says ~55% hover throttle with 15’s which is in the ball park of the ~1600µs command hover output seen. You could use a bit more thrust/weight. Forget those motor manufacturer tables, they can be accurate or way off the mark in my experience.

yes indeed 16" will fit. the only reason I went with the 15" is because of the higher efficiency listed in the tables, I thought that might get me a bit longer flight time.

I’ll turn off the “low RPM power protect” first, then fly again to check if I observe any changes, then I’ll switch to 16" and try that afterwards. The 16" immediately available to me aren’t the same type of prop, but it should provide useful data regardless

I’ll turn off the “low RPM power protect” first, then fly again to check if I observe any changes

That would be an easy fix and it might have some influence. But typically with this on with low kV motors the motors won’t spin ~ above 1/2 throttle. So it’s a drastic problem. But hey, let’s see!

Not sure if this is related but your RCX_MIN values are odd. Some are 989/991, then RC5_MIN is 1041. I had some weird calibration numbers like that when my Taranis transmitter wasn’t set up correctly for 16 channel ppm

In my opinion the 16" are too big and also too heavy (too much inertia), even if you take the lightweight NS type. In my tests with the 4006 380kv, 15" was the limit that could be flown with sufficient agility. OK, this was not directly comparable because it has 380kv but it also has already 50% more “iron”.

I think the 15" NS props could fit here.

I have not tried the 16" yet (forgot them this morning) but I tried the 15" NS, no improvement. Busted one of them unfortunately.

The whole thing is very strange, because it seems to fly just fine in stabilize, alt-hold, loiter. But as soon as I turn on auto-tune, it crashes on the first or second roll attempt. Is there something about the auto-tune that can be tuned? Isn’t it strange that I can’t recreate the instability while I’m flying, even aggressively, but then it crashes on autotune?

Re crashing in AutoTune, you’ve done the ESC calibration and motor test of course and set the MOT_SPIN_MIN value to ensure the PWM values don’t go too low?

Are all the BLHELI ESC settings back to defaults and low voltage and low RPM protect settings turned off? Leave timing and everything else at defaults.

but then it crashes on autotune?

There is always manual tuning. A bit of a process but it’s what I do.

@xfacta
yes I believe my settings are back to defaults, with “low rpm protect” turned off. Below is a screengrab of the settings I used to crash this morning. Looking at it now, I don’t know where the 1040/1960 for min/max throttle come from. Perhaps that’s how AP maps my taranis inputs of 988/2012. Does blheli suck in the 1040/1960 over the ds150 coms, based on the MOT_SPIN_MIN and MOT_SPIN_MAX values scaling my taranis raw inputs? 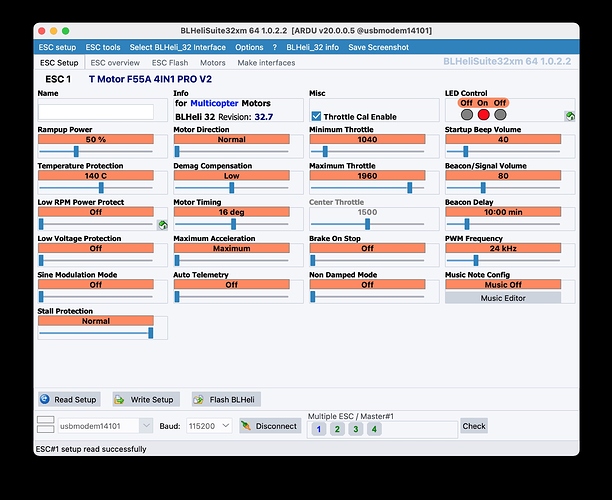 One thing: I just noticed that my MOT_THST_EXPO is 0.71. I don’t remember ever entering such a high value–is that learned somehow? (EDIT: my expo value came from @xfacta’s great spreadsheet I remember now) Could that be causing a problem? I’ve read somewhere that the t-motor ESC might have some built in linearization, so that we’d be doubling up with a curve in AP. Do you think this could be an issue? Any suggestions on what value I should use for my ESC (T-motor F55A 4-in-1 pro v2)?

.1 and .15 will be good for the MOT_SPIN values.
Usually only the T-Motor Flame ESCs require an odd MOT_THST_EXPO, your BLHELI ESC will just need the normal value of 0.71
I think BLHELI defaults to those PWM values until calibrated, but all that is irrelevant and ignored when using DHSHOT.

EDIT: Actually I also use Sine Modulation = ON and PWM Freq = 96kHz

Higher numbers of MOT_SPIN_MIN are generally safer in terms of protecting against too-low throttle value but will reduce the vehicle’s ability to use lower throttle values for control (both attitude and altitude). A larger range is better if possible.