Thrin vs Throut in a quad that won't fly

a question from an absolute beginner. My quad will not fly because it tips over when trying to take off. Looking into the log I find that thrin does not match the throut.
ESCs are calibrated (as far as I can tell, by following instructions). What is wrong, broken or misused by the noob? 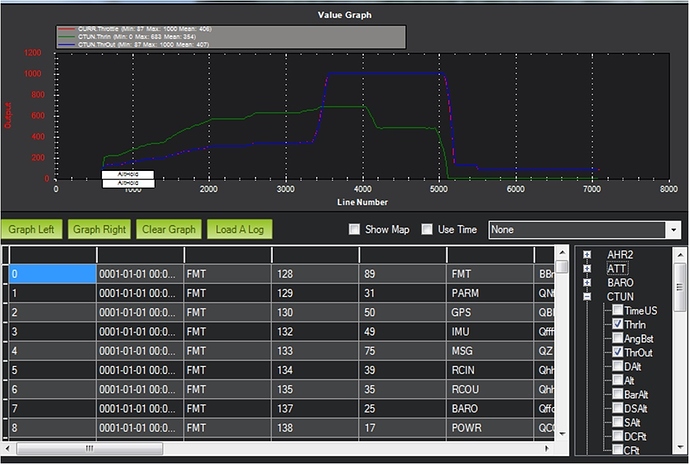 They won’t match unless you’re in stabilize mode (or acro I “think”) as mode’s like alt hold, pos hold etc use the throttle stick as an altitude stick ie you push up the quad gains altitude, pull down it loses altitude and in the middle it maintains altitude. The throttle output is controlled by the apm/pixhawk and not directly by the stick.

You would be better off trying to fly in stabilize first (throttle stick is then a direct throttle control), if it won’t fly in that mode then you have something fundamentally wrong ie cg out, esc/motor problems etc. When stabilize is good, move on to other mode’s like alt hold, loiter and pos hold.

Thanks for the reply!

What I should have explained, is that these plots we created when the quad is sitting on a bench, without props (FC setting on standard, no loiter or alt.hold). As far as my beginner-brain can understand, the FC does not have to correct anything. What worries me, is that the throtte in does not directly respond to out. The thr-in is level, while the trh-out goes to max and only when thr-in is back to 0, thr-out responds. It does not look normal to me, and I assume that this causes my quad to function as lawnmower rather than flying toy.

That picture says it’s in alt hold though? If that’s the case then it looks normal to me. When you go over half throttle the throttle out will go up so the quad can gain altitude. But as it’s on the desk with no prop’s the altitude can’t increase and the FC, not knowing any of that, will keep increasing the throttle out to try and gain altitude.

Double check you have it in stabilize and try again, or post up a log on here, or a link to drop box or similar.
In stabilize the throttle in and out will follow each other, they may not be exactly the same though as the throttle mid setting will effect it.

As I mentioned before, I am a complete beginner on this. To me, a delay in throttle response as is shown in the plots would suggest disaster waiting to happen when I’m need to avoid a crash into something, or worse, someone…

Yep, those log’s show you are in Altitude Hold for the whole flight which looks’s to be working just as it should.
You need to do a similar flight but in Stabilize which will mean changing some setting’s in mission planner.

At the moment you have -

I’d change the first 3 to Stabilize, Altitude hold, Position Hold. That way you can progressively work your way through the flight mode’s that rely more on the flight controller.

Stabilize is all on you and is recommended as a fall back flight mode in case thing’s go wrong for that reason.
Alt hold will test thing’s like barometer and vibrations, any issue with those and it won’t hold altitude.
Position Hold does the same as above but also test’s the GPS functionality.

OK, thanks for the reply. I changed the settings, fired up the quad, still without props, and played a bit with the throttle. It does respond better now. Any glitches to be seen with an experts view?

Until an expert comes along…

I don’t know if it’s something you’ve changed, but the THR_MID is 700 which is quite high and indicates a very under powered craft.

Setting it back to 500 should bring your throttle in and out should match exactly in stabilize, but only if you can. The idea is that setting compensates for an under/over powered craft so that mid throttle in stabilize means the craft doesn’t suddenly shoot up or fall down.

Apart from that, you really need to try flying it and if it still tries tipping over get the log up.
Some people say that just going for full throttle to get in the air as quick as possible is best. Personally I raise the throttle slowly and just let the quad lift up steadily. But, I know how my quad will react to my input’s and yours may be very different.

I was really reluctant to try, but using the stabilize setting the machine flew! It needs some pitch corrections during take off to prevent it from tipping over, but once it is airborne, it flies really smoothly. The stabilize mode was not programmed under a switch in the RTF donor that I used parts from to build this thing. That is why I never tried (nor considered) it. Thanks MarkM for pushing me in the right direction!

What I find interesting/disturbing, is that when I change the flight mode from stabilize to alt.hold or loiter, the Quad looses power, as if the throttle is tuned down. It loses altitude until I give more power using the throttle. In these modes, the quad is much slower. Is this a setting that can be changed? And can I adjust the flightmodes in a way that I can use alt.hold without loosing the agility?

Logs of the two flights are here

From what I can see, your throttle is at around 33-40% in stabilize mode when you change to alt hold/loiter. When you change to these mode’s the throttle stick becomes an altitude stick, so the throttle has to be in the centre in order to maintain altitude. As you were at 33-40% the uav think’s you’re telling it to descend.

What you need to do is get the uav up to a reasonable height and maintain a hover at that height for at least 10-20seconds but the longer the better really, and it has to be in stabilize.
When done, load up the log and show altitude and throttle in, you should see a nice flat line in the altitude where you were hovering it. At the same point in the log have a look at the throttle input, I’m guessing it’s going to be 300-400. What ever that number is, you set the THR_MID parameter to and save the parameter’s

You should find then that the uav will only start taking off when your at/above mid throttle and that you can hover the uav at mid throttle. Switching to alt hold, loiter etc should not change the uav’s height when you do so after getting that parameter set. It might take a couple of goes to get it just right but if you keep repeating the process you will get there.

Loiter is a restricted mode designed for video work (in my opinion) and you would be better using Position Hold instead. It hold’s position like loiter when you let go of the stick’s but fly’s around like altitude hold.

Thank you again!
Quad is flying great now. Agile but not nervous anymore.

You sir, are my hero!