The Greatest Puzzle of All Time - Path Wobble

The craft is doing EXACTLY what the controller is telling it to do.

You are correct. That is why it appears to be a navigation controller problem, not a position/attitude estimation problem. That kind of oscillation happens to me when my L1 period is too low for my plane.

Nathan I am currently using L1 Period of 8, if I go higher the drift off the path is increased dramatically

I remember reading you can use a recorded log as a simulated file, maybe that will give us some answers, in particular what the heading was doing at that point (3:55:45) when it told the craft to start wobbling

@John_Easton. The most perplexing thing about this is it happens and then goes away. You are also using developer code with the vectored thrust. I did my best to look through your log and I can’t see anything unusual that happens to cause the boat to get in a funk. However, I did notice somethings that can be seen in the graphs below. Your Y axis vibes are high. But then again it works most of the time. NAVL1 is 6 which seems a bit low to me but yet it works most of the time. The Throttle out and desired throttle Vs. throttle are slightly suspicious to me. But again it usually works. I see you run your missions at 4 m/s. Your CRUISE_SPEED is set to 1 and CRUISE_THROTTLE is 5. Perhaps setting CRUISE_SPEED to 4 and figuring out what the CRUISE_THROTTLE should be would help the algorithm. 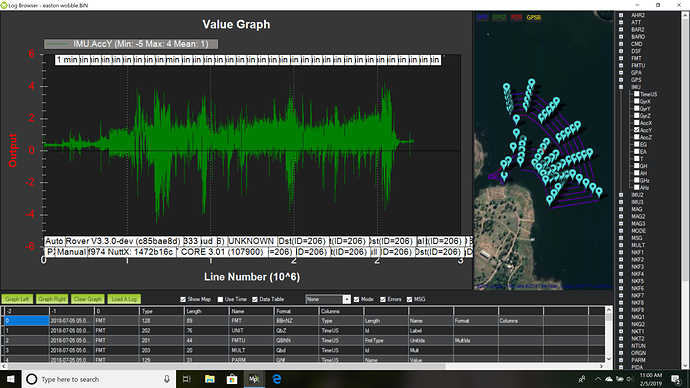 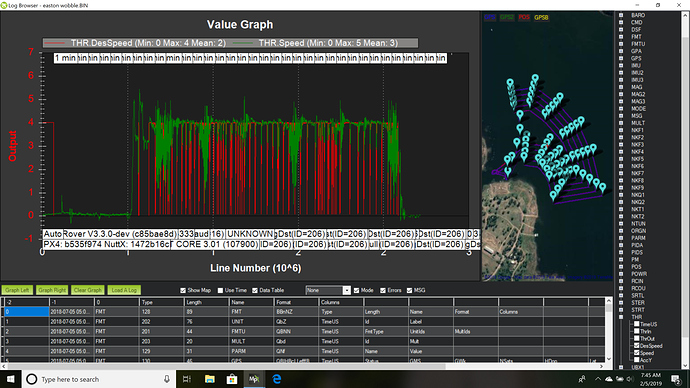 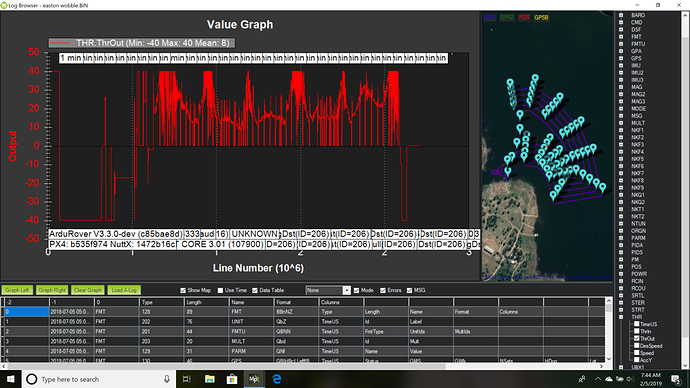 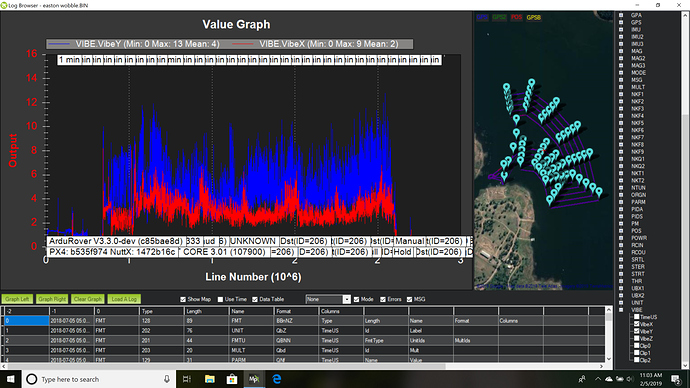 How can we tell what heading the compass is reading just before the wobble starts?

I’m not sure but I looked at des yaw / yaw and desired yaw looked correct but not so good on actual yaw. To me it looks like the controller new where to go but something prevent the desired actions. To answer your question I don’t know. I’ll look at it again

Thank you David, I know Randy is going to be releasing a brand new Rover (from scratch) this year.

Well I have looked at all 3 mag’s and imu’s and I don’t see anything that looks like a hardware problem. I hope you get this solved. Sea monster maybe.

I wonder if that damping gain is far too high and causing the oscillations.

yes, sorry, that is correct. I was looking at an old printout

If you were to build a controller for a boat, what would the bare essentials be from a controller perspective?

I understand that a plane, and especially a multi rotor drone requires a very complex controller, but surely a boat is position, heading and throttle - DONE!

The vehicle’s speed control is very uneven during turns (sometimes) and I think this is leading to the navigation controller demanding changes in the turn rate which leads to the wobble.

Yes, that makes sense, especially in the real world of boating.

You definitely need throttle / thrust for turning, but it has to be constant and gentle.

As mentioned here and there, I think there is a feedback loop between the throttle controller and the navigation controller and perhaps it is made worse by some physical effect like the speed at which the boat begins to plane on the water.

The underlying cause of the wobble is the poor speed control. Because the navigation controller uses the current speed to decide how quickly it should turn back onto the line between waypoints (instead of the desired speed) the oscillation in speed turns into a steering wobble. 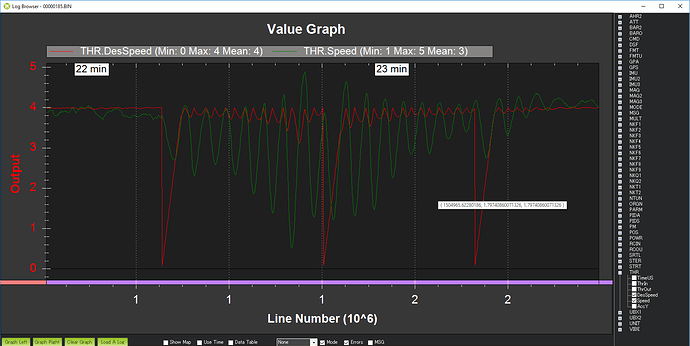 Could you try these changes?

WP_OVERSHOOT = 5 (was 1). This is used for lane-based-speed-control. If it’s too narrow then the vehicle will try to slow down too often as it bounces against each side of the lane. I hope increasing this number will reduce the dips in desired speed.

Thank you Randy, I will try these settings this weekend.

The MOT_THR_MAX of 40 was to attempt to minimise the severe over throttle when doing the ‘wobble’.

A couple of questions / suggestions:

Can you drive the boat manually? You might be able to get a “feel” for the sensitivity of the throttle.

Have you done a mapping of steady-state throttle setting vs. speed?

Randy has suggested changing the SPEED_I and SPEED_P. It may also be worth looking at the _D and the rate as this might catch some of the dips - what are your values for these?