I’m currently using the TBS crossfire system for long range automated flying with the Pixhawk Cube. I have the TBS receiver (on the aircraft) wired to the Pixhawk via the mavlink (TELEM2) port and the telemetry talking to Mission Planner on my laptop via a bluetooth connection from the TBS transmitter module. All this works well, although the telemetry feed is slow and limited, I would rather use a dedicated SIK 900Mhz radio telemetry feed.

My question is, will the crossfire system running at 868Mhz drown out/interfere with the SIK radios running at 900Mhz (or vise versa). The SIK radio can and will run upwards of 1W ouput while the crossfire sometimes runs as much as 2W. I also have 433Mhz radio system but the range isn’t quite up to scratch for what I need.

I should also add that I have had a amateur radio license for many years, my gut instinct tells me that these two systems will work together with some carefull antenna placements but I don’t know enough about what bandwidth etc that theses radio systems use and would greatly appreciate some assistance.

RFDesign designs and manufactures the Antennas, RF Electronics and the RFD900 radio modem

Depending on your location either the 868Mhz TBS or the 900Mhz RFD is illegal.
Besides the legality;
The two radios are completely different and designed from ground up to fulfill different needs. TBS is a hobbist long range RC radio, which happen to have a limited telemetry capability.
RFD (and i’m talking about then new RFD900x) is a telemetry radio which happen to have an 8 channel CPPM RC control channel as well.

If you need reliable, fast, telemetry then it is a nobrainer to switch to RFD, and forger the TBS, you can use the CPPM pass-through function for RC.

If you plan to use booth, it depends on the filtering of the TBS, BUT only if TBS is at 869 and RFD is 900. If you use RFD868 (which is legal in Europe) then it will interfere with the TBS.

I should also add that I’m in Australia so 868Mhz and 900Mhz is ok to use here, plus I hold a amateur radio licence. I would rather use both the TBS system and RFD 900 so that I have a backup system if one goes down for whatever reason. Like you said, it’ll depend on the filtering of the crossfire receiver weather or not these will work in close proximity of each other.

You can’t use 868MHz in Australia. It’s within a mobile phone allocation, so stomping around in there is likely to be both illegal and unwelcome.

According to the ACMA, as of August 2018, 861Mhz - 870Mhz is now allocated to trunked radio services such as land mobile applications and cordeless telephones.

I’d love to see a reference for that! Happy to be wrong: need evidence though.

Just like yourself James I’m happy to be mistaken too. The only reason I’m interested in 868Mhz is because TBS offers 868Mhz in the settings of the transmitter module and it’s relatively well spaced away from my RFD 900x telemetry radios.

Anyway, I still stand that I would go with the RFD900x, it is superb in all parameters than the TBS. It has a proper LNA, input filtering and a well designed PA section. I flown 30Km, with 64Kbit data rate, with simple rubber duckys at 300m height, and the reason was to turn around is the battery.
TBS’s SX1272 is designed for low speed LoRA comms, it cannot stand against RFD.

After your advice and some testing today I’ve decided to use the RFD 900x. IMO the TBS system works extremely well if you just want pwm/sbus control at long range, but it just doesn’t compare to the SIK radio system in speed/stability when it comes to telemetry and that’s important to me in the way I use Ardupilot.

Hi Conrad - I’m interested in how you will run your RC over the RFD900. I too use the RFD for telem (and to talk with my new antenna tracker) and crossfire for the control link. I’ve been treating the mavlink control via mission planner as a ‘redundancy’ for flight control. I run the crossfire module in my taranis for main flight control. Will you use a joystick in mission planner to control your aircraft over the RFD?

Contrary to my last post, I have decided to use both the TBS Crossfire system for direct control and the RFD900’s for Mavlink telemetry and backup/redundancy. Seems to be the best way to achieve a good solid telemetry link at long rage

However I still don’t know if the Crossfire system running on 868Mhz will drown out the RFD’s running at 915Mhz or vice versa. I am currently building my setup but still waiting for some parts to arrive so I can field test this myself

edit: to answer your question, Ive never used the joystick function on mission planner so I cant say that i will use it. I only use mission planner for simple flight mode changes etc.

I’m in Aus too and use RFD900X on several aircraft and the new TX MOD on the back of a taranis with omnis. I’ve had zero dramas with PPM passthru on the 900X and have pretty much discarded every other TX/RX combo I had previously including a rather nasty 3W 433 system. Stick with only the 900X in my opinion

Thanks Conrad - after reading your post I read up about the RFD TXMOD system, which I hadn’t paid any attention to up to then. It seems like a great system but too big an investment when I’m already 3x RFD900+ and a few Crossfire systems deep!

I’ve had no problems mixing the RFD and the Crossfire on the same plane, and that includes a couple of platforms that are also transmitting in the LoRa 900mhz band (so three radios in that same general area on the spectrum). I don’t require big ranges though, so nothing tested over about 2km.

That’s exactly what I’ve done, I ended up using the RFD TX Mod with the Pixhawk Cube and it works extremely well. Only thing with the TX Mod is that I wish it had a external power supply option like the Crossfire system has. The relatively small batteries in my Horus x10 don’t last that long when the Module is using full power.

EDIT: for those wondering what I’m referring to, here is a link. 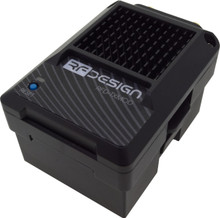 RFDesign designs and manufactures the Antennas, RF Electronics and the RFD900 radio modem

We’re doing a major refit of systems early next year and this will be the new control / telem link for sure. The multipoint capability will be very handy.