Taranis vs. Horus vs. Jumper - Which one to select and why?

I am slowly trying to learn more about FrySky products.

Within Horus and Taranis product family, there are several different models which makes choice selection even more difficult.

lastly, are ALL FrySky Receivers are compatible with all brands of FrySky Rx?

What are the gotchas?

I own several Futaba radios and very familiar with them. Like Futaba T14SG & TMZ18 WC are both kick ass.

I also have a Tranis X9D -Plus which i am looking to upgrade but want to make a wise choice.

p.s. The FrySky Horus X12S looks pretty slick to me

p.s.s. Adding Jumper to this discussion to keep @Moksh happy

I think Jumper T-16 is most powerful radio right now in market.
Even joshue bardwell had been switch jumper t-16

Also some information out there

Really? This Jumper T16 is an exact replica of Futaba 18 MZ WC from look and feel. And one of your video says Fr Sky Copied JR

So they all cheat…

With all respect to Josh, he jumps from one thing to another although his instructional videos are awesome. Also, some of the youtubers get kick backs for reviews and have paid referrals links…so…hmm

I make my buying decisions based on a product comparison matrix, not what someone rambled on for 30 minutes on you tube

So don’t worry , recently I have some problem like switch not working properly so complain in jumper help center and problem solve through once again update my radio also change my sd card.

And this video is too past when radio coming. at that time open-tx not for jumper tx and also not compatible , but now open-tx for jumper

And also you fly expensive copter and also need expensive radio it’s not important , i hope you understand. Some time cheap things are excellent. And good think to buy also it’s very useful.
(Because all developers are not same thinking)

I tried the first gen Horus and found the screen to not be readable in bright sunlight (too many reflections). And the battery life to be quite short compared to the Taranis. Supposedly you can use a high-contrast theme and be able to see the Horus screen in sun. But it is the exact opposite of the Taranis. If you run telemetry scripts on the radio and have useful info on the screen, the Taranis is 100% usable all day without a backlight. Even if you do use a high-contrast theme in the Horus, the backlight still has to be at 100% to see it, which shortens battery life.

That all being said, I use a Taranis, but a Taranis-E (X9E). The E runs for 12 hours on a full charge before the low battery warning comes on. Which is important for me as I fly sometimes 8 hrs in a day and don’t have time to mess around with generator or a car charger in the field to keep my radio alive all day. The only time the radio gets a rest is when the helicopter comes in for a refuel, and that’s usually only about 15 minutes. Of when I pack up and move to a different field (I fly ag survey work).

For me the Horus was a non-starter. Fancy styling with absolutely cheap-feeling buttons, a cheap TN-film screen, high power consumption, and lots of hype included. I still have my Horus in a box here for the last two years. I set it all up and was thinking this was really cool, the Kool-Aid was good. It lasted all of about one hour of actual flying in the field with it to put me in the category of “not impressed”. I was going to sell it on RC Groups but nobody wants it because it’s a first-gen. So I’m saving it for parts. Quite a few of the parts in it interchange with the X9E, including the gimbals.

Thanks Chris for your inside info. I guess the Tranis Plus is probably the good one I already got.

When they get too powerful, any company has a tendency to start bullying. Two years ago TBS was blackmailing sellers not to sell FrSky’s R9 system (which offers long-range at a much lower price). One year later FrSky themselves were doing exactly the same thing, blackmailing sellers not to sell the Jumper transmitter. I have no doubt as soon as a new competitor shows up, Jumper will be the latest bully.

Personally I’m keeping my QX7 and don’t see any reason for switching as long as it works. As it was already mentioned here, all the fancy stuff is only reducing battery life, and I’m hardly looking at my transmitter while flying FPV anyway.

I have also QX7 , but some time is arriteting me like gimble not smooth as I prefer and I’m not capable to switch hall gimble. So I’m selling.

all the fancy stuff is only reducing battery life,

By the way thanks for this kind interested information

The R9 system has its own problems, mostly related to Smart Port telemetry.

I have also QX7 , but some time is arriteting me like gimble not smooth as I prefer and I’m not capable to switch hall gimble. So I’m selling.

I think the QX7 can use the same M9 Hall gimbals I have in my X9E. They are pretty easy to change. And despite the hype, there is no difference between the M9’s and Horus gimbals as far as the pilot can tell. Many times when a pot gimbal gets “glitchy”, removing the gimbal from the radio and cleaning the pot wiper with WD-40 will “fix” it. There is also no difference that the pilot can tell from a properly working pot gimbal to a hall-effect one. If somebody tells you they can, there is either something wrong with the pot in the gimbal, or they’re blowing smoke.

They are pretty easy to change

What is it ? I wanna always go to farm and all time I’m facing dust on my gimble some time remove automatic and some time I remove with blower (air pressure)

This is the stuff. It’s made from free range weasels.

Yeah I watch some youtube video but can I remove dust Frome my gimble using this wd-40 ???
Is it safe ???

This is the stuff. It’s made from free range weasels.

I think I have heard it is made from free range weasel piss. But the process to collect it is proprietary.

WD-40 is the trademark name of a water-displacing spray. The spray is manufactured by the WD-40 Company based in San Diego, California. Different sources credit different men with inventing WD-40 formula in 1953 as part of the Rocket Chemical Company (later renamed to WD-40 Company), in San Diego, California; the formula was kept as a trade secret and was never patented. According to Iris Engstrand, a historian of San Diego and California history at the University of San Diego, Iver Norman L...

Yes, it is safe. I don’t know about cleaning dust. But it has been used by ham radio operators and other radio service technicians to clean dirty potentiometer wipers since like the beginning of time (or least since 1953, which means it’s older than I am).

No, don’t ever use regular WD-40 to clean electronic components. Not safe.

This is what you use; 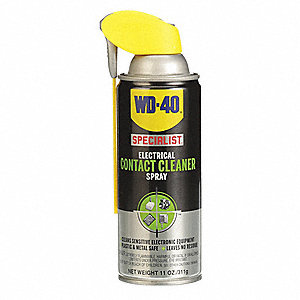 The R9 system has its own problems, mostly related to Smart Port telemetry.

As far as I know, the only real problems with R9 occured when FrSky shipped 2.4 GHz antennas with it.

But when that happened, R9 was practically unknown. So far I have had no problems with SmartPort Telemetry (and the LUA scripts).

But I will frankly admit that I would switch to Crossfire if I had the money to replace all my receivers, because FrSky’s recent actions seem a bit dubious (intentional firmware incompatibility, an alleged bug that sounds like only invented by them to make people switch to “Access” etc.).

On Ardupilot anyway, I think I’m better off with R9 at the moment.

So Horus and taranis RX are not compatible?

So far I have had no problems with SmartPort Telemetry (and the LUA scripts).

We use R9 but have found if it drops the telem link it won’t pick it back up unless the receiver is rebooted. There’s not quite the bandwidth per channel on 900 MHz that there is on 2.4GHz.

Yes, this is annoying, It happened to me today.Telemetry screen frozen. Oddly the only metric that was updating was Total Distance. And if you are on ACCST this will never be fixed. No updates.

Well…
I vote for T16 v2
It uses modern battery and human friendly charging.
Moreover, it is cheaper and has 6pos switch!

We use R9 but have found if it drops the telem link it won’t pick it back up unless the receiver is rebooted.

First time I’ve heard of this problem. At least so far, SmartPort telemetry always came back for me on 2 Arduplanes and 2 iNav copters, and the telemetry screen never froze. But I have to add I didn’t do any serious long range stuff with it - not yet.