jic2022-blog-title-image1349×497 51.9 KB
TAP-J competed in the Japan Innovation Challenge (JIC) a couple of weeks ago and below are some details about the competition and how it went for us. It was quite an experience because of the tough weather conditions (it rained 2 out of 3 days) but also a lot of fun because of all the new technology we used compared to previous years.

The executive summary is for the first time the team competed in all 3 stages of the competition (Search, Delivery and Retrieval) and came away with 3 million yen in prize money (about $20K USD). The image on the left from our search drone’s thermal camera of the mannequin hidden in the woods. We calculated its location to within 6m. No other teams came away with any prize money.

The competition is held each year over 3 days in Kamishihoro city in northern Japan.

The facilities consist of 3 areas:

For the search (see video) we used a Qu-Kai folding quadcopter with a Flir Vue thermal camera. It flew fine but was loaded down with so much equipment that its flight time was relatively short (our search mission was only 7.1km). The organisers almost always put the mannequins within 50m of a path though so we were able to design a mission with a high chance of success (and we succeeded!) 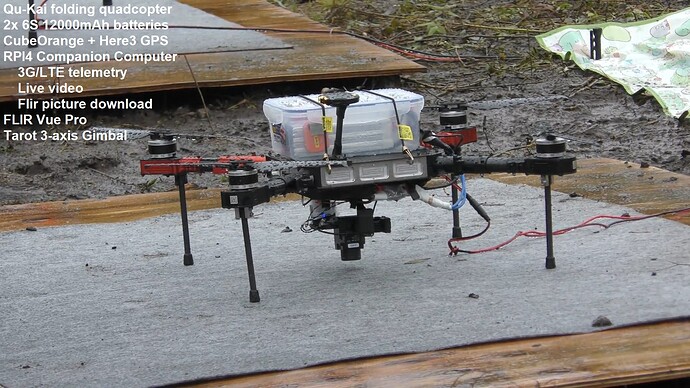 For the delivery (see video) we used an EAMS Robotics hexacopter with a Daiwa winch. We’ve used this vehicle every year with good success. This year sadly though the winch didn’t lower the package for reasons we still need to determine. 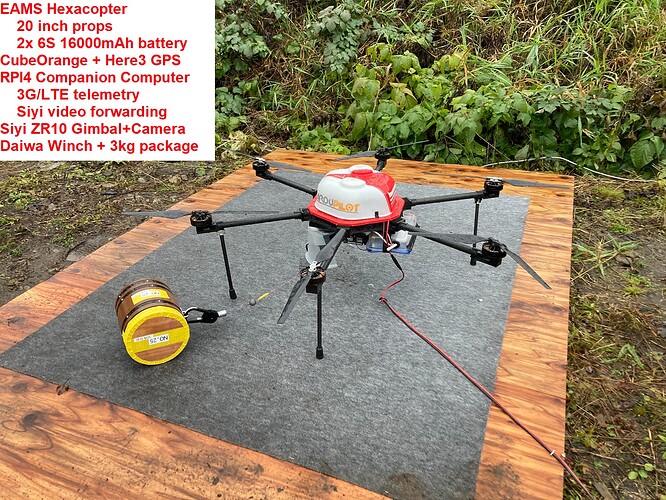 For the retrieval we had two Rovers, one was built by Tokyo University Professor Kaizu based on a Kubota
AMX3 riding lawn mower with a custom fork lift on the back (see video) The fork lift can be angled forward/back and also lowered or raised. To retrieve the mannequin it is first angled forward and lowered, the rover moves forward to push the lift under the mannequin’s body. The lift is then rotated back and lifted up and the mannequin is carried home. This vehicle has incredible power but as you’ll see from the video even it got stuck on a huge log on the final day. 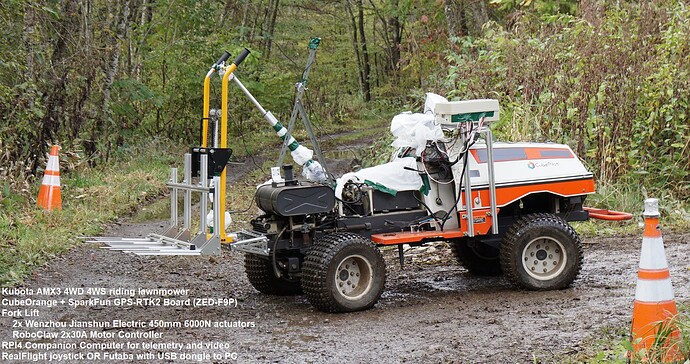 The 2nd rover was built by AttracLab using Misumi “aluminimum extrusions” and various other custom parts (see video). The front of the horizontal plate can be raised and lowered using linear actuators and there is also a noose at the front connected to a winch. The way it works is the plate is lowered and the mannequin’s feet are scooped in, the noose is then tightened and pulled which drags the mannequin into the body of the rover. It is somewhat miraculous that this rover got over the logs and through the brush to the mannequin despite its relatively small tracks.

As you’ll see from the videos (Prof Kaizu’s rover, AttracLab rover) both rovers got very close to the mannequin but neither was able to scoop it up because of the very difficult terrain.

Beyond the two rovers, the team came up with a bunch of new technology most of which is open source

We got so close to rescuing the mannequin that I expect we will try again next year with updated vehicles. Perhaps a larger version of the AttracLab rover with active suspension. Perhaps we could put linear actuators on each of 4 wheel to allow raising/lowering each corner of the vehicle to ease getting over the logs. Maybe multiple hanging claws would help us pick up the mannequin instead of the sled design we used this year.

For the search phase I’d very much like to replace the FLIR Vue + Tarot gimbal with an all-in-one gimbal+camera unit.

For the delivery, as mentioned above, I’d like to try without using a winch at all. Instead just dangle the package on a 30m cord from the bottom of the drone and use Package Place (as we did this year).

Congratulations on winning that challenge.

…there is a certain irony in the rescue vehicle needing rescue itself.

(Speaking from experience after sending a small drone looking for a larger drone that suffered a fly-away, only to be loosing smaller drone as well.)

So when you’re talking about drones not being able to be touched after 2PM, does that mean power and RC connected ready to go or will someone independent do that at start of challenge on behalf of competitors ?

So nobody is allowed to physically touch the flying vehicles from 2pm until the event for that day is completed for all teams (so between 10pm and midnight). … no plugging in of RC, no re-attaching batteries, no pulling SD cards from cameras after the event completes… it all needs to be handled remotely.

You probably already saw the solution we used to keep the batteries charged but in any case, here’s the video of the simple solution we came up with involving a variable voltage power supply. Sadly we still got caught out the first day because we kept the main battery charged but neglected to think about the auxiliary battery for the companion computer and winch.

Certainly beats messing around with something like rigging up an induction charger which would add more weight and may take a lot of “messing around” to get right.
Also great that you’ve mentioned those parameter changes as I was already wondering about the capacity low fail-safe setting.
Thanks