I have always wanted to build a Chinook. With the latest ArduCopter code supporting tandem helicopters, I thought I would build a small test bed.

I have used two 250 class frames, standard flybar heads, a single motor and a gear drive between the two rotor assembles. I have used a PixFalcon as the controller running ArduCopter 3.5.3. 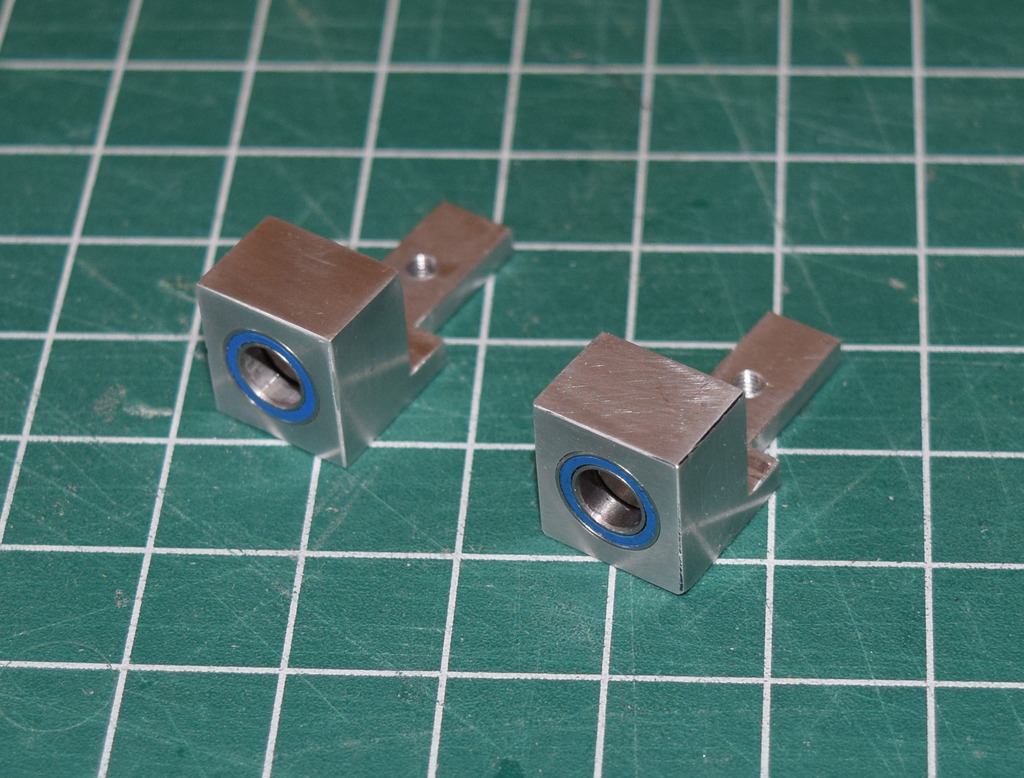 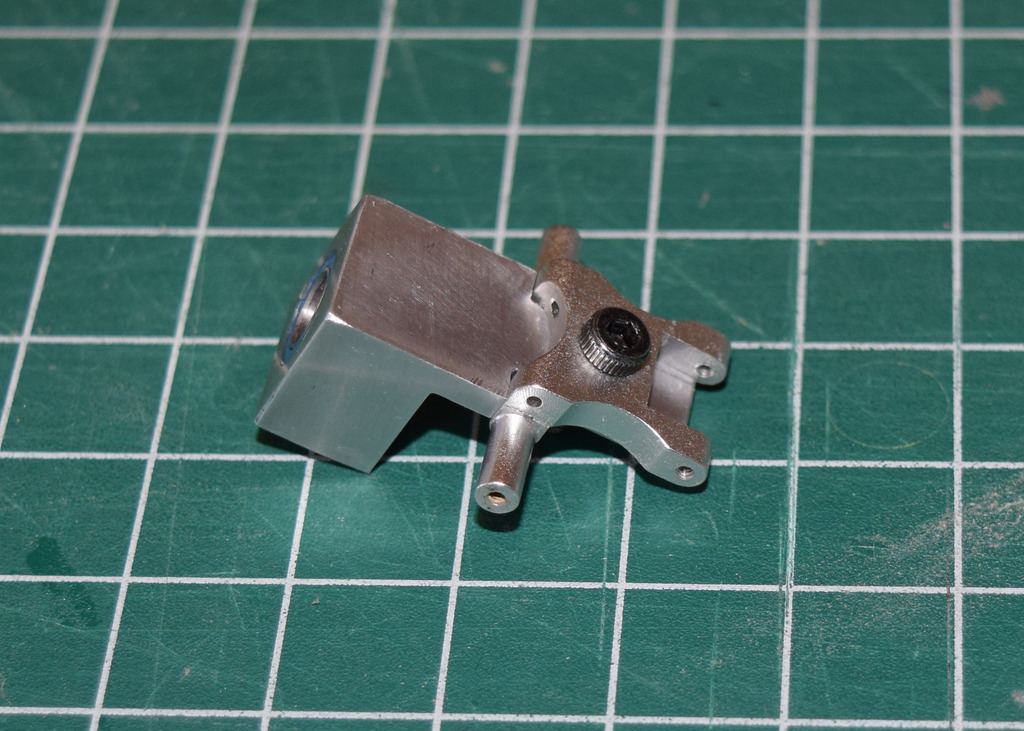 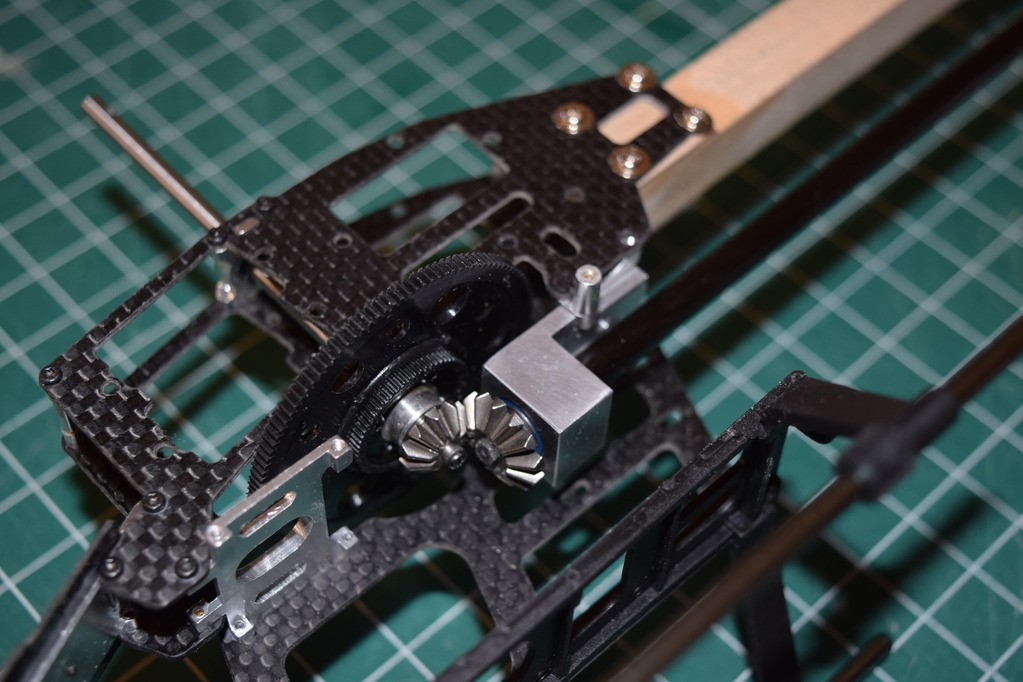 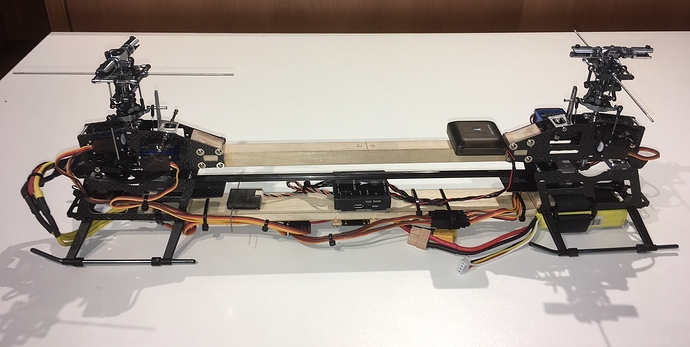 I am having an issue on setup with the aft rotor assembly. The two rotors counter-rotate, forward in the normal manner (clock-wise from above). Using the stock flybar heads, this means that the collective motion on the aft rotor needs to be reversed. I can modify the servo reverse setting to get correct collective motion but that then causes the roll and yaw to be incorrect.

Any guidance or suggestions would be appreciated.

This is just a guess, having not set up a tandem yet. But in these following params the positions of servos 4 thru 6 might be what’s causing it. I would think the servo positions should correspond to the airframe orientation so at the mininum servos 4 and 5 would be 120 and -120 degrees?

Since there is no documentation anywhere, it could be that servo #4 is actually the zero degree one, and 5 and 6 are the the -120 and 120 too. That’s just a guess. But I would play with those three params and see if you can get it to act normally, anyway.

Thanks for the steer, it got me focused in the right direction.

Setting H_SV4_POS,-120 and H_SV5_POS,120 and then changing the reversing setting on SV4, SV5, and SV6 got the swash respond as it should. Looks correct with manual input and moving the frame in stabilized mode.

Adrian,
Great project! If you don’t mind I would like to pass on some experience that I have with a project that was similar to this. First as you alluded to, I am working with @PittRBM to check out this sensitive swashplate issue. Are you able to build your own firmware or would you need someone to make those changes, if they solve the problem, and build the firmware for you?
So I had spent some time trying to build a V-22 tiltrotor. I had gotten as far as a working drivetrain where I completed some ground runs but never got it off the ground. So I want to warn you of a dynamic mode of rotor system that will cause coupling between the two rotor systems. I saw it when I did my ground runs and had to redesign the structure interconnecting the two masts. If you are familiar with helicopters they are susceptible to a phenomena called ground resonance. This is a destructive coupling between the lead-lag dynamics of the rotor blades with the aircraft landing gear. So the lead-lag dynamics between the rotor systems can couple with the aircraft structure. You probably see it as rotor hubs shaking from side to side. I’ll look for a video of it occurring on my drive train and post it so you can see what it looks like.

Thanks for the input.

I should be able to build a modified firmware with a bit of guidance on the process. I have experience with developing firmware for microcontrollers but this has typically been done with a dedicated IDE.

I am familiar with ground resonance in full scale helicopters. There are some excellent examples on YouTube. I would be interested to see your experience with this in the RC realm.

Looking forward to your progress on the swashplate issue.

So here is a video of a run up after I had redesigned the interconnecting tube. The original design used a 3/4 inch diameter tube to connect the two nacelles. I was not able to get past 900 RPM because the nacelles would start oscillating about the interconnecting tube. So I increased the diameter of the tube to 1.5 inches. This provided enough stiffness that I was able to move through the instability without destructive resonance. You’ll see in the video that I am first increasing RPM to just see how bad the vibration is and then I do a complete run up getting the rotor speed to what I anticipated was the operational RPM. Once I got past the vibration, everything smoothed out and was fine. So take your initial runup slow. If you see a vibration or head oscillating then take a moment and think whether you want to proceed. I was seeing 1 to 1.5 inch movement at the head in my original design. The difference between our designs is that for you each head is sitting on the ground so that will help things but once you get in the air, everything changes. So good ground runs don’t necessarily mean that you are safe.

One other note on your design is the location of the controller and the stiffness of the mounting location. I could see this as a potential issue depending on how the vibrations setup in the structure. And for this I’m not talking about the issue above, I’m just talking about natural structural vibrations that occur in any helicopter frame. So your initial run ups that will be a good time to see how the vibrations look in the flight controller. Again though, everything changes once you are in the air.

I really just ported the code to copter 3.5 based on earlier work by @fhedberg
As @ChrisOlson suggests, the H_SVx_POS parameters are the ones to start with.

Setting H_SV4_POS,-120 and H_SV5_POS,120 and then changing the reversing setting on SV4, SV5, and SV6 got the swash respond as it should. Looks correct with manual input and moving the frame in stabilized mode

great, glad you got it sorted

I need to look into that, its possible we have a scaling issue

I’ve put in a PR to fix this, based on what @bnsgeyer noticed with the scaling factor being off by a factor of 5x.

I really just ported the code to copter 3.5 based on earlier work by @fhedberg

Then Fabi told me he has some code for four-servo swash already and has flown it, so we’ll work on that for 3.5.

yes, it should fit in quite well, with a new FRAME_TYPE to select it

Good to see someone joining twin-rotor

I will do a flight test tomorrow if it’s not raining but I believe we’ve found the cause of oversensitivity.

@tridge Thanks for taking a look at this. I’m glad you were able to submit a PR so quickly.

I flew CH-46’s (smaller and much cooler

version of CH-47) and ground resonance was usually due to our struts being improperly serviced with nitrogen. So we just depended on shocks. Nothing fancy. On a good day it felt like you were riding on a washing machine. You might be able to minimize with simple foam pads on your skids. Not sure.

BTW, really cool project. I am obviously very biased but I think tandem rotor designs are cool. V-22 is just a CH-46 turned the wrong way so fixed wing pilots don’t faint when they try to fly it.

Haven’t got a chance to fly yet

I tried applying the fix without my synchropter modification but build failed with “no children… Error 2” can’t remember exact message.

I will try using .waf instead of Make since it now has documentation/tutorial.

The fix to the sensitive swashplate issue just got committed to master yesterday and will be in next version when it’s released.

I have the heads all set-up, blades balanced, blades tracked and ground runs completed. Ground runs (with 2-3 degrees negative pitch) showed no visible vibration issues. Looking forward to getting into a hover!

Adrian,
If you don’t mind, could you make a log file from your ground runs available? I’d be interested to look at the vibration data.

I will save a log from my next ground run and get it to you.

I did save a graph from the last ground run before I deleted the log. The vibration values are more than I see with my tricopter but it has a better vibration isolation system for the PixHawk.

What should I be targeting for acceptable vibration levels in a traditional helicopter?

Adrian,
If you could post a bin file from one of your next ground runs, that would be great.
In order for me to analyze the vibrations from the IMU data, Please change your LOG_BITMASK parameter to 393215. This will give you fast IMU logging and PID info.
The vibrations may change some between ground and flight. Typically the vibrations are worse on the ground. As far as what is goodness for a heli, I would say you are doing good if you get the VIBE signals below 5 but less than 15 is what the EKF considers good.
Regards,
Bill

I am going to be on the road for business for the next couple of weeks but will progress on my return.