I will try tuning first and then try loiter again, interesting the different tuning needs of the frame types on the same board/setup.

My eventual goal with this is to have a mode like this :- (in Stabilize Mode the BlueROV2 will stabilize roll to level and it will maintain heading when not commanded to turn.) I do have a video of that I will post when i find it.

Obviously without the roll part, I had it working well on the same platform with Ardusub and it makes driving laterally much easier for what I’m trying to achieve. I see Ammarf is working on a mode that does hold heading but it seems that it might operate differently to Ardusub stabilized.

And my overall goal is to be able run an Auto mission and input a do_set_Yaw command or alike to maintain a heading angle and move laterally if needed.

I have to say Rover has progressed along amazingly well in the last 6 months, I’m still new to this and it all changes so fast !!!

Cool, thanks! I’ve created an issue for the do-set-yaw (or maybe it’s do-conditional-yaw) command so we don’t forget.

Hi,I have test the frames in mannual mode, but how to realize the auto or guide modes? The L1 control is not perfect methods foe omni cars to navigate. So Do you have some methods or suggestions？ Thankyou!

Loiter, Auto, Guided do not yet take advantage of the lateral motors but they should still work.

In auto modes, the car should rotate their direction or adjust posture,then car moves to the waypoint. it can’t move to waypoint directly.it can’t move laterally in auto modes.

So,Do you realize laterally moving method ? or the car can move all direction directly?

so when travelling to a waypoint, the car/boat will turn to face the waypoint and then drive forward. If it moves off the line between waypoints, it will turn in towards the line and move forward.

In the future, when we have lateral support in Auto, I think the vehicle will probably always face the waypoint, and when it moves off the line, it will shift sideways to get back on the line.

en,if Rover has the lateral support in auto,it would make omni X cars poplarized in many apsects. It would be a great acheivement! Thank you for your answers!

Lateral movement isn’t supported in Auto and Guided yet. You’re probably right about L1 control not being ideal, as Randy said, the current idea is to convert lateral acceleration to lateral movement output, this will move the vehicle laterally in order to help it stay on the line connecting two waypoints.

With some tuning I can confirmed that the X frame works well in auto and loiter. I ran a small 6 waypoint mission all worked as expected, loiter also good.

Great, thanks very much for testing and feeding back!

No worries Randy, Glad to help.

Here is some footage i took about a year ago, using ardusub as the code base.

The X frame boat is in stabilised mode, automatically keeping the heading from the last controller input.

I am using a “calibrated” stick to try and change the heading. There is no controller input from myself

If this mode was to make it’s way into rover it would be a great help to me.

Yes, if all goes well we should have a mode like this coming… basically I think once we add lateral support to ACRO mode it will do what you want… I think… The only thing is that ACRO would also try and hold position if it had a GPS. If it didn’t have a GPS position then it would be just like what you’re looking for… heading hold but otherwise manual…

Thanks for the reply Randy.

My reasoning is that I want to take flow measurements and maintaining a heading directly into the flow is important. ideally I want to automate this, but there are times were GPS will not work ( tall trees on the side of riverbank) so i will need to use manual mode.

A Stabilised type mode would help a lot in very low/slow flow and the wind blows hard in the wrong direction effecting the heading. Taking some of the driver error or helping the driver in preforming measurement.

I guess I could turn the gps off if it is not needed for driving manually.

In this video stabilised is on and you can see when the boat changes direction moving laterally the autopilot takes hold of the heading. The end result is very straight clean lateral movement, which is what I’m chasing.
I am only using 1 stick on the controller, lateral / forward reverse.

Any move to a mode like this is a great help Randy, thanks for the continual improvements and efforts.

I’ve never seen this before! It’s a bit like how a traditional helicopter flies which involves changing the pitch of the blades as they rotate. I suppose the complexity is mostly in the mechanical setup itself… the inputs to the mechanical bit may just be forward-back and left-right. Anyway, if someone puts in the hard work to actually build this mechanism, I’m happy to help with the software side 'cuz I think it’ll be far easier than the hardware!

Graupner has been making these for a long time but they are relatively expensive.

Voith-Schneider drive with brushless motor for driving and controlling ship...

The Original since 1982 In 1982, we presented the first Voith Schneider engine unit in our Thyssen II. Meanwhile the third generation with completed new tooling and numerous improvements is at the start. Thanks to the Special VSP...

OK, so the interface is not difficult to support I think. It would need a 360 degree servo controlling the top bit and then the motor speed would just be another PWM output from the back of the flight controller so not bad.

I am planing to add Ardupilot support to a rc diving support vessel (model), that is equipped with Schottel propellers - basically propellers that can be vectored horizontall (at 270°). The boat has two set of propellers at the bow and two at the stern (acting parallel). Is there a setup for this kind of layout?

I’ve been trying to set up a frame like this, but have run into issues getting the motors to actually run. I’ve uploaded the software and changed the configs, as instructed. I was wondering if you had any insights into what is going wrong? Does it maybe have to do with what frame_class I am using?

Here are some pictures on the test bench, in case I messed up the wiring somehow. 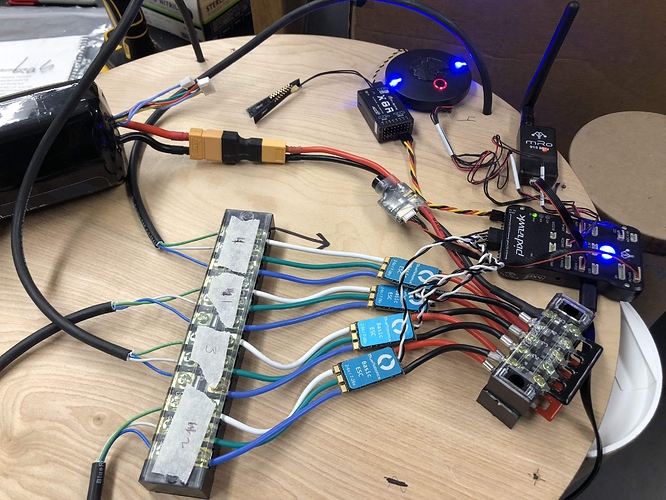 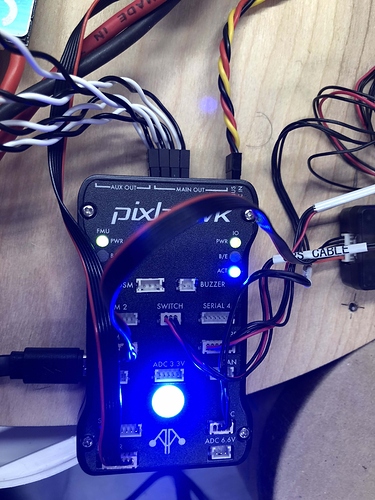