Sudden loss of satellites for 12 seconds results in EKF variance

I have something unusual going on with the drone. It’s a very random issue.

While the drone is flying, there seems to be sudden loss of GPS for around 12 seconds and then the GPS is regained.

Things I have tried:

I have not been able to find the root cause of such issue. There have been such similar issues mentioned in this discussion forum, but no concrete reason has been provided. Just wondering could it be a firmware issue or some compatibility issue with this particular GPS module?

I have shared 4 flight logs:
https://drive.google.com/drive/folders/12FJl7KhgVtsfnjkgJhL0Zge2jX6YQz0x?usp=sharing

This is not a firmware issue, this is an electromagnetic interference issue. Move your GPS antenna and receiver away from other electronics and cables.

All I see in the log is the GPS is re-detected well into the flight. Why don’t you update to latest Stable Copter, perhaps there will be more error messaging.

Perhaps updating the drone to the latest stable copter version and looking to more error messaging might able to help me to find the reason behind it but is there a way to diagnose the issue with the current firmware version. I mean by looking at the logs or by the past experience.

I looked at the logs. GPS Status and Sat count go to zero for longer than 5 seconds triggering EKF failsafe and Land. Then it reconnects. Faulty GPS, faulty connection, something in that old version of firmware, don’t know.

Basically, you say that there is nothing solid to conclude anything from all the 4 logs and perhaps updating to the latest stable copter version is the only way to go?

Basically, you say that there is nothing solid to conclude anything from all the 4 logs

I looked at 2 logs and that’s all I got out of it.

Hows the GPS being powered. Is it off the flight controller and if so what does vcc look like.
GPS can be intolerant to poor power.

I use UBlox GPS + Compass Module. The GPS and Compass are powered through Pixhawk. Below is the connection diagram:

Just wondering had there been any power related issue, it would have reflected for the Compass values too in the log.

Just wondering had there been any power related issue, it would have reflected for the Compass values too in the log.

You are right with the power issue.

On your Pixhawk, serial 3 (GPS) is set at 38400. That speed is too low to for the M8N with two satellites systems (GPS+GLONASS+SBAS) defaults. Your problem look like a buffer overflow. Set the serial speed the same as the GPS UART.

You have given a new dimension to the issue. But before that, I have few questions:

It is more a general update https://www.u-blox.com/en/docs/UBX-16000319 allowing Galileo Use and some improvement.

All you need is here: https://www.u-blox.com/en/product/neo-m8-series#tab-documentation-resources

I don’t know when you get your GPS antenna, but M8N v3.01 is alive since 2017. Your product could be a low level copy or end of life bargain.

It should work like that but I am not sure about it being a generic message. If it is detecting 115200, then it must be fetching it from the GPS.

I was going through the source code of Ardupilot:

running a uBlox at less than 38400 will lead to packet
corruption, as we can’t receive the packets in the 200ms
window for 5Hz fixes. The NMEA startup message should force
the uBlox into 115200 no matter what rate it is configured
for. 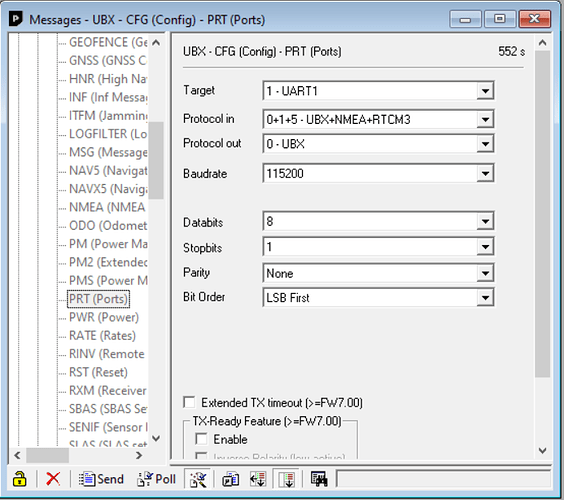 Then, I tried connecting via Pixhawk and checked again Autobauding option in u-center. It was always connecting at 115200.

Good to have this information. It will be good to set the Serial3 speed at 115200.

I will set the Serial3 speed at 115200. But again coming back to the initial query, we have still not been able to find the root cause of the sudden loss of satellites for approx. 12 seconds.

There is a gap in the transmission between GPS unit and Pixhawk. 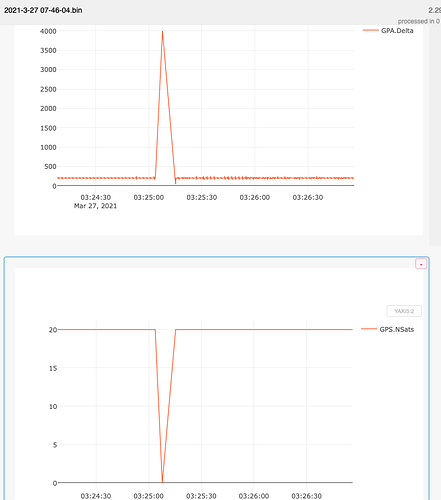 Yes…seems like communication failure or GPS failure or could be anything…
I guess what @dkemxr has suggested (to update the firmware and check for more error messages) is the only hope left.

Try stick aluminum foil under the GPS. We do this on all our production models and we find that it increases the GPS count by at least 5 sats.
Also update firmware to 4.07 if you are using arducopter.
I believe this helps as it addressed a memory issue.

The reasons can be of two types - internal and external (if there are guaranteed no mechanical defects and wire breaks). Airborne radio equipment emitting at frequencies (or their harmonics) GPS can disrupt the reception of satellite signals (video 1.2-1.3 GHz including). Also, now there are many civil and military systems for jamming GPS, you may have encountered them. What is absolutely certain - this is not a problem of firmware and bodrate.