Hello everybody, I experienced very strange failsafe behavior the other day. During tuning of roll controller gain, aircraft went into the RC failsafe and change its mode from MANUAL to CIRCLE mode for milliseconds. During this very short moment, the pilot was given aileron command. After regaining normal throttle signal again the aircraft roll about 150 degree and pitch -60 degrees.

We were using Pixhawk 1 board, Hitec Auro9x transmitter and Optima SL receiver. Arduplane version is V3.7.1.

The aircraft fuselage is made from carbon fiber but the RC receiver antennas are placed outside of the fuselage. We flew at the same location all day but this only occurs one time, so distance to RC transmitter or line of sight interruption due to the fuselage is not the case.

Power-> Vservo log shows that at this instant servo rail voltage drop 4.846 Volt, could this voltage level be very low for RC receiver(Hitec Optima SL), thus it closed for a very short time.

Do you have any thought about this incidence?

It was definitely a loss of throttle failsafe as can be seen in the graph.
You also have vibration spikes on the Xacc and Zacc signals thats not going to help anything.
Could it have been a loose wire on the RCin?
There are a lot of spikes on the RCin on most channels.
Was this a very vigorous flight?
How well does this plane fly in manual?
Have you trimmed it and redone your radio calibrations?
The DesRoll and roll are nowhere near each other, same with pitch and yaw.

Some more info on the aircraft and it’s setup would help. 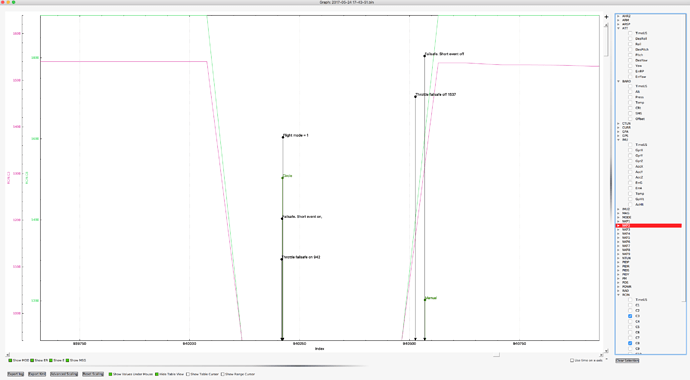 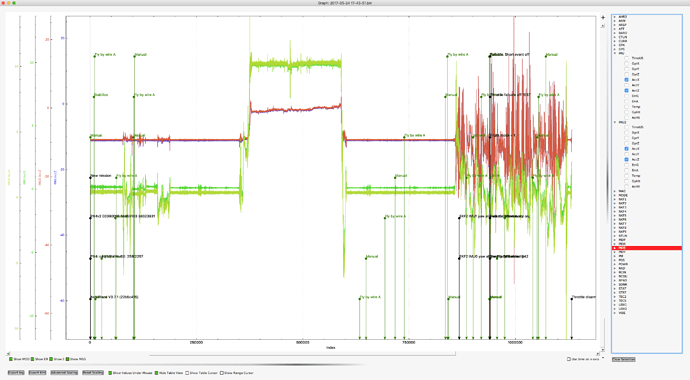 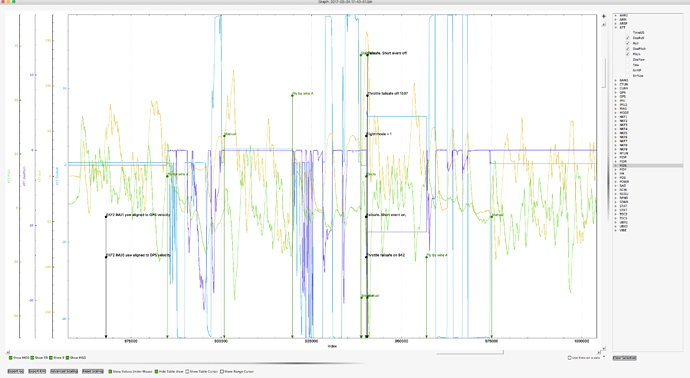 This was an inverted v-tail pusher plane with a takeoff mass of approximately 4.5 kg. The autopilot was set according to documentation. It was second flight of the aircraft. The frequent and sudden RCin in the aileron channel were intentional. We were trying to tune roll gain with the ground station. The aircraft flew very stable with RC control during the first flight. Takeoff and landing were also very successful in this video.

I guess, I need to reposition RC receiver antenna to eliminate the communication loss.

Although we used this damper under the Pixhawk board, the vibration in the X and Z axis did not disappear. This is the second aircraft we flew with the same Pixhawk on the damper and these vibration readings were present in the first one as well. We will use Pixhawk 2 for the next flight. I hope those vibration reading will disappear.

We also noticed that the aileron needs to be trimmed. This issue will be solved mechanically until the next flight.

It was first flight with the autopilot. The DesRoll and Roll value were not matching because PID gains were at their default value. In the second flight with autopilot we can only be able to tune the RLL2SRV_P gain and the roll response was much better. However, after inspecting data logs, I noticed aircraft has oscillations in the roll axis which show that P gain needs to be lowered. This is the log file of seconds mission with moderate roll response:

By the way, which log analyzer are you using? It seems much better looking and intuitive than Mission Planner’s.

I use APM Planner for logging analysis as it has much more intuitive interface and allows better zooming and paaning through the data.
As well as many other great graph features.