Hi guys,
We’ve been doing recently some test flights with Y6 configuration copter and we’ve experienced twice a sudden altitude drop. We have tested a lot of Y6 copters before but this happens on a new frame which is however very similar in all parameters to what we had previously.
It happened first in a survey mission after around 15 minutes in flight and as the copter stopped at one of the waypoints it suddenly started loosing altitude at around 4 m/s descent rate. Pilot switched mode to althold and seemingly he recovered it and was able to land normally.
We were trying to analyse situation but without signs on what could have possibly gone wrong we decided to do another flight test. At first it looked everything was good so we launched it again into full survey mission. Copter proceeded normally and entered RTL at the end but as it reached horizontal position it started decending at a crazy rate and the pilot was unable to stop it so that it hit the ground hardly. What happened later with RC control is being solved by us here but we cannot track what could possibly cause that altitude drop in the first place.
In the logs you will see that desired and actual climb rates start to diverge at the moment it starts decend. I don’t wanna suggest any explanations right now but if anyone has an idea of what was the cause, please let me know. It would be also helpful to get suggestions what further tests to carry out to pinpoint the exact cause. Here’s a complete log of the last flight: https://mab.to/oK2d6XHZK

Check motor3.
The descent was caused by lost of thrust As you can see CTho went 100%, at the same time motor3 went max, and others are almost maxed out as well. (but provided stabilization against motor3)
It seems your copter is a little bit underpowered (flies around 60% thrust) and cannot maintain altitude with only 5 motors. 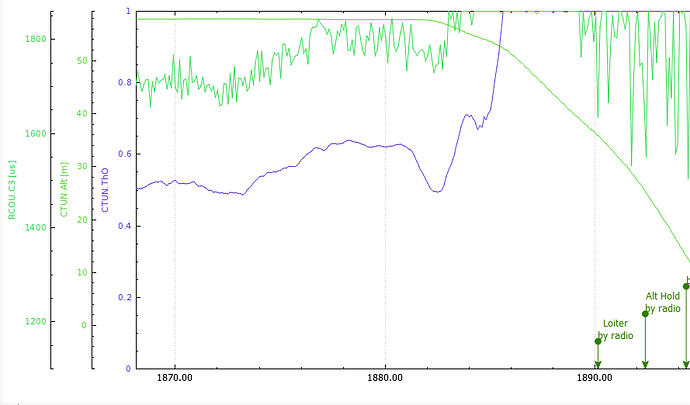 Hi Andreas
thank you for your time on this. Interestingly this is also what we figured out and blamed one of the motors first. However if you look at the rest of the log you will see that the copter hit the ground, bounced off it again and after another bounce landed just normally in RTL. The same thing happened the day before and the log I’ve uploaded is from the test day as we already new there was some issue. Yesterday, I’ve also tested the motor 3 and 4 in the exact setup on the copter, although on a testbench, to see whether there were any problems with them and after running 20 minutes on full RPMs nothing happened.
Does that add a bit of interesting facts to the discussion ? What do you think would be worth investigating further ?

Sounds like a possible motor wire short. When you draw current with props on, the wires will heat up exposing the short. Are you using bullet connectors?

I’ve just made another test with second airframe first tested and checked as mechanically good and sound. Suprisingly the first after hitting the ground at 7 m/s descend survived without any damage. Still, I did a flight with the second airframe and had older version Mission Planner connected and wanted to tune parameters a bit. I discovered that the older version does not work well with newest ArduCopter as parameter ranges are different - so I was not able to tune some pitch rate P up only down. The moment I clicked write params from tuning/config it just happened again - being in Loiter and just 3 meters above the ground. The copter was lighter as it didn’t have 1.2 kg gimbal on it, so it flies at 40% Throttle and yet the same thing happens. Check out the log here: https://mab.to/mIAjVLei6

All 2 flights before were also done on older version Mission Planner so it’s all cases were the same. The second airframe is just the exact copy of the first one and has completely new hardware.

Issue seems to be resolved by increasing pixhawk pwm outputs by 100 so that it makes more use of escs (earlier outputs maxed at 1860us) and by disabling brakes in escs. Made quite some flights and so far no problems recurring.