Striver mini VTOL is a 7kg vertical take-off and landing fixed wing,which inherits the safety and practical characteristics of the Fighter. 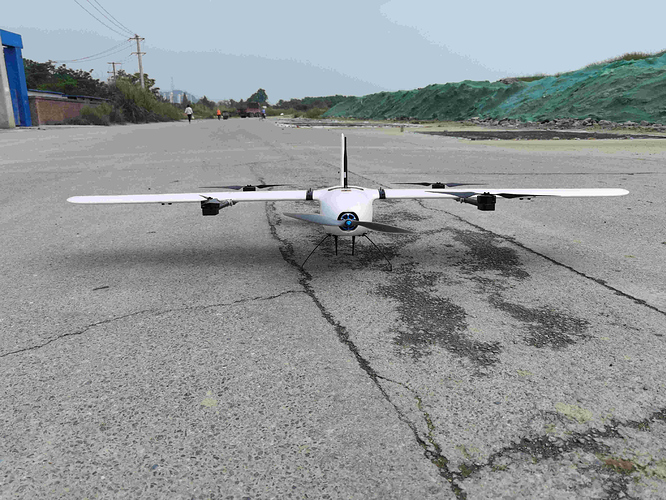 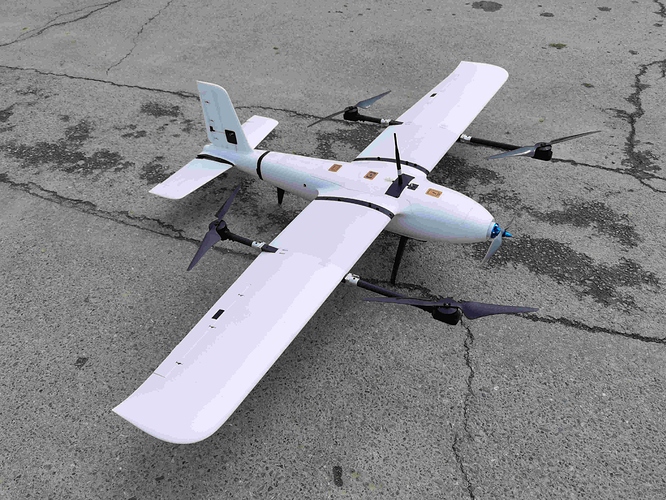 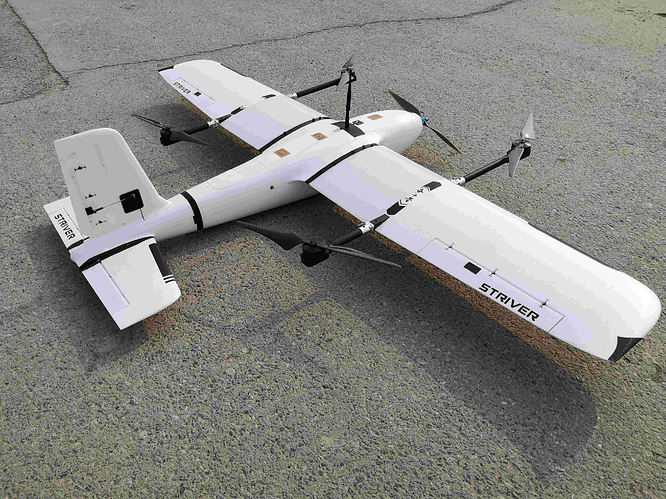 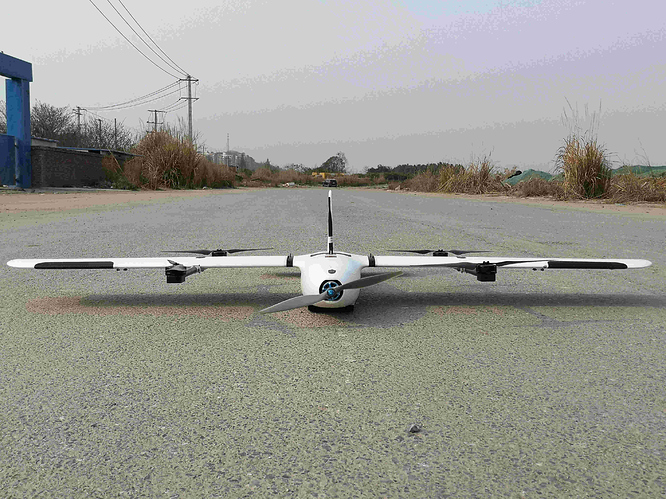 The Striver mini VTOL looks like a great size for 6s setup. I made a chart comparing the specs with the larger Fighter VTOL. 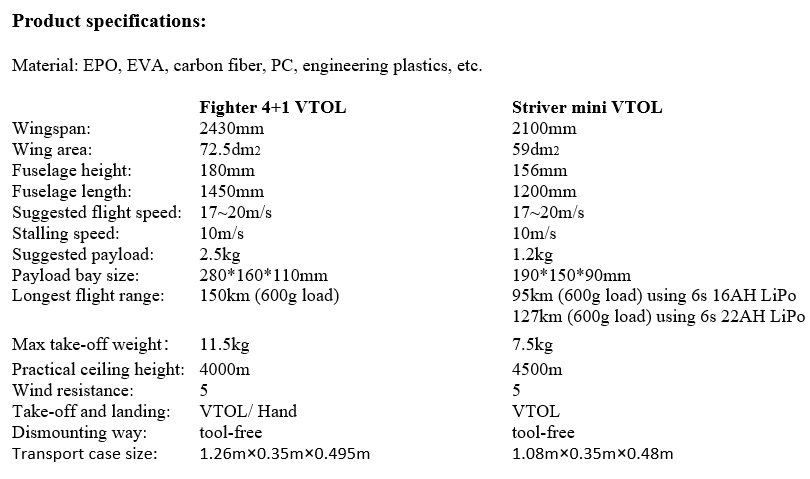 She looks good but I think a “Mini” should probably be around 1600-1800 mm wingspan so there would be a more significant reduction from say the Fighter… but that’s just me.

It’s seems wacky so hopefully things will settle down. I would recommend emailing MFE direct or waiting for it to arrive at Banggood USA warehouse.

There is a carrier board for pixsurvey cube in the fighter and the strive. Can anyone tell me whether that board is compatible with the orange cube and where to get the said carrier board?

The Pixsurvey Cube V3 Aerial Survey Flight Control Set only seems to be available through taobao and not AliExpress. However, you can try emailing Mr. Chang Liu at 2565710339@qq.com for answers to your questions. Customers have been able to order directly from MFE in the past.

The main reason for not using 1600-1800 mm wingspan is that the load capacity and endurance are reduced, and the efficiency in the field of surveying and mapping is decreasing.

Looking at the shipping cost to the United States between the Fighter and Striver on AliExpress, I do not understand why the smaller Striver box is almost twice the shipping cost using DHL? Can the Striver be purchased directly from MFE by email?

The difference in DHL express price is mainly the price difference caused by different agency channels. We use DHL recommended by AliExpress, the price is higher, and the AliExpress platform requires a part of the fee.
If someone needs to purchase, contact us directly by email, the shipping cost will be much lower.

It looks like AliExpress continues to drop their shipping cost. It is currently at $375.72 for FedEx to the US. I suspect that a direct email order from MFE will be even less. The AliExpress Striver page also lets you select the PNP version so I wonder if the shipping restrictions have been lifted. 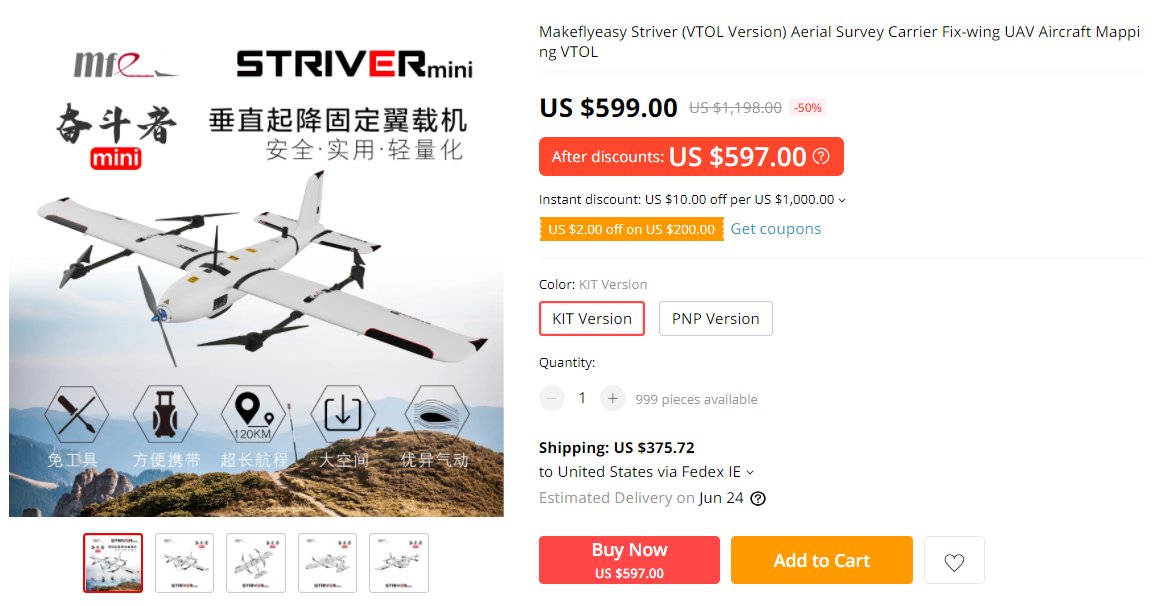 The Striver price continues to settle with a discount to $532 and $202.81 for AliExpress Standard shipping. 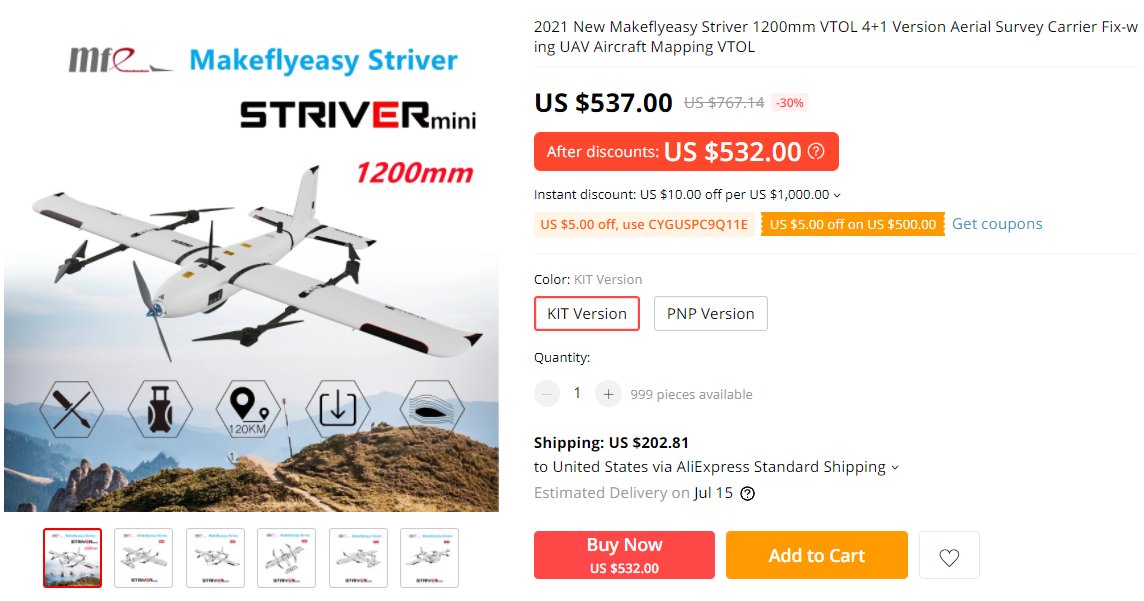 The best price so far on the Striver VTOL Kit is from the AliExpress Summer Sale. It’s $524 with free shipping! 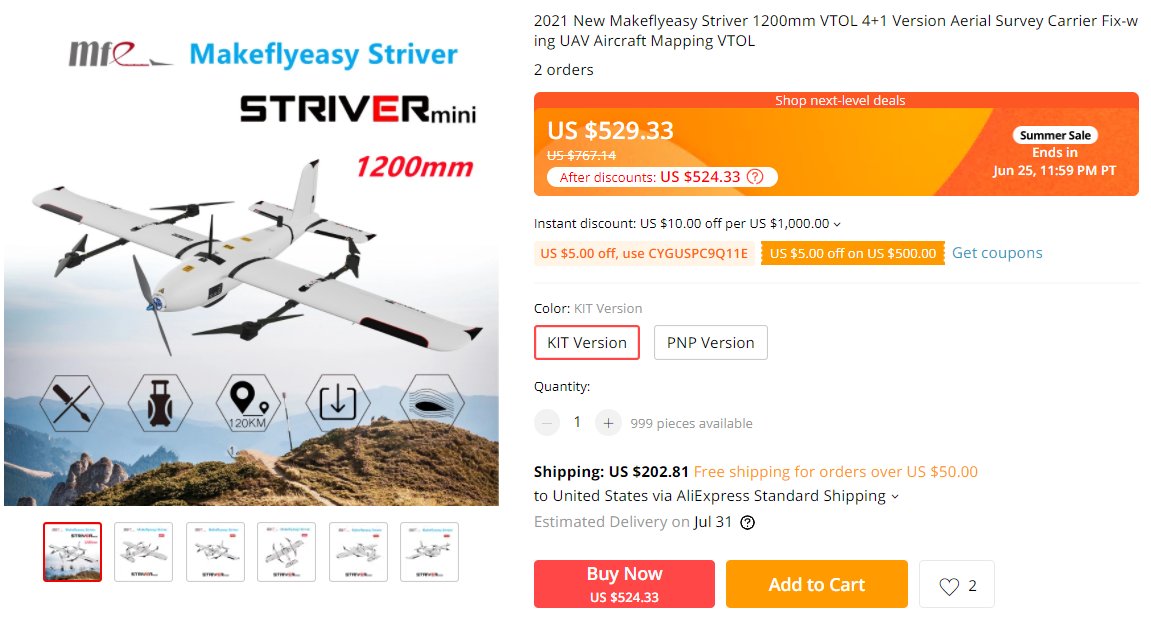 My winter project arrived. Here is a comparison of the box size between the Striver and the larger Fighter VTOLs. 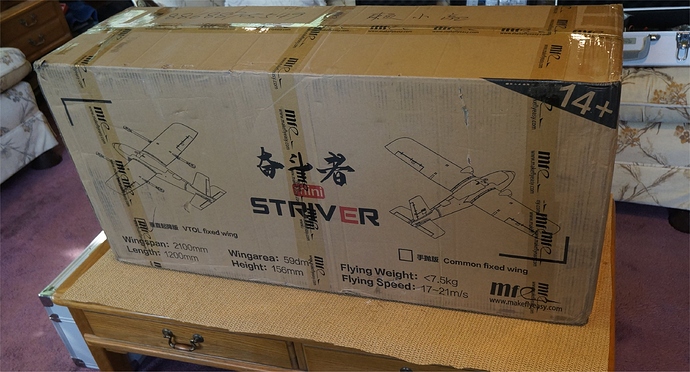 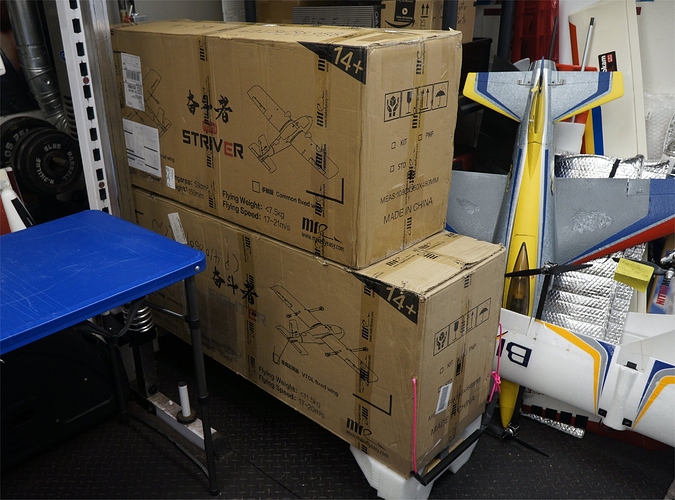 When do you envisage that you’ll make a start on this one? I look forward to following your progress. Are you looking at the same or similar power system setup as your fighter, for this one?

I would be interested to see if Banggood Australia will be stocking the Striver and the Fighter…I have bought various airframes from their Australian supplier and they always arrive very quickly and in fairly good shape.

When do you envisage that you’ll make a start on this one?

Sometime after our flying season ends in October. Maybe November or December. The build will be similar to my Fighter thread photos so you can simply do a search there anytime.

Are you looking at the same or similar power system setup as your fighter, for this one?

Yes, same quad power system on a 6s 21AH LiPo pack. I don’t have any more spare 4120 motors for forward flight so I bought the recommended SunnySky X Series V3 X4120 motor for $85. This motor is also available at BuddyRC.

OK thanks Greg. I will spend some time there reading in detail…and look forward to your thoughts on the MFE Striver - once you have it completed and in the air.

Any other members building the Striver yet?

Thanks for the thrust motor recommendation Greg.

I asked this same question about the fighter…but I am just wondering what the diameter of the Striver VTOL arms are?

I have ordered a Striver through Aliexpress so hope that works out ok…For now I think the Striver could be a good starting point for my working VTOL mapper and should be able to be built right on the upper weight limit and still do what I need it to. Fighter build will then come later and will probably do that as a 12S system…and it should have scope for multiple payloads…

Also I followed up on your Sunnysky motor leads but unfortunately they are out of stock at the moment - so have instead ordered a Tmotor AT4120 500KV with a15x8 prop as a starting point. I’ll probably static bench test all of my motor prop configurations (including the Tarot 5008 380kv with 17x55 props) just to get an idea of thrust and current draw before I fit anything to the aircraft.

One question I have for you regarding flight battery - what would you regard as a realistic minimum # for the C rating on a Lipo that will be tasked with both the larger current draw of the VTOL motors (which is the most demanding of the two systems) and the forward thrust motor? In this build I will either just use one battery for everything, or if there is room, I may use a separated battery circuit approach as I (and others) have discussed in the Fighter 4+1 Forum. So your thoughts on the minimum C rating for the One battery approach and also Dedicated VTOL and Dedicated Forward Thrust batteries would be most appreciated.