Do any of you with more experience have any comments about the possibility of using Valves announced Steam Deck as a Mission Planner computer?

The Steam Deck is likely overkill for computational requirements of Mission Planner but the built in joysticks and buttons sure seem like they would be useful as input devices.

Dave2D and other tech YouTubers sure seem impressed with the specs of these devices.

I’m new to ArduPilot and I haven’t actually used Mission Planner to monitor an airborne vehicle yet. I may be missing some important information, but from what I’ve learned the Steam Deck seems like a great tool for UAV control.

My main concern about using the Steam Deck as a ground control station is the small screen size. The Steam Deck can drive external monitors but adding an extra monitor would negate much of the appeal of using the device.

Again, I’m curious what those of you with more experience have to say on this topic.

That and an RFD900 might make an interesting controller.

The only thing I would say that if Windows just recognizes this as a regular joystick then there will be a good amount of lag going from Windows --> Mission Planner --> Radio --> Aircraft. I have run joystick control via MP over 900MHz and it is a good second of delay or so.

But yeah - pair the guy with an external radio and it looks like a solid offering.

from my understanding this device runs on SteamOS, some kind of Linux.

Be default yes - but it is open to load any OS.

Be default yes - but it is open to load any OS.

That’s my understanding as well. I’m pretty sure you could put Windows on it.

I have run joystick control via MP over 900MHz and it is a good second of delay or so.

Have you figured out where these delays occur?

The joystick interface needs to be low latency to use with a game so I can’t imagine there being much lag in a joystick/OS interface.

Have you figured out where these delays occur?

It seems to be on the MP/Telemetry end. There are some things you can do to improve latency like run down the rates of other info (open up the data stream) and out the radio in low latency mode. I haven’t played around with it lately - but I might give it a go and see if I can get it to a manageable latency. Definitely won’t be anywhere near RC update rates - but I’ll give it my best.

In case any of you are curious about this device, Linus of LTT was able to use one for a bit. I still think it looks like an interesting option for a ground station device.

I’m thinking of using it in a ground station kind of like this cool one. I’d use the Steam Deck instead of the Raspberry Pi. My tentative plan is to use a similar style of case to hold a battery, keyboard and largish monitor.

Years ago I used a microcontroller to interface a PlayStation 2 controller with a touchscreen and radio module. 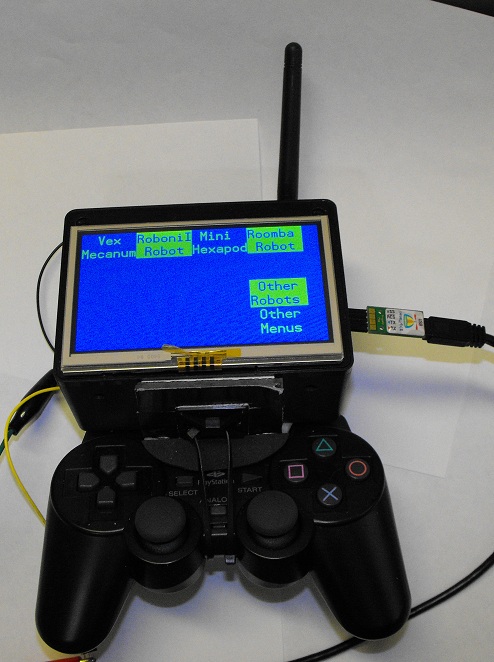 494×662
I’m really hopeful the Steam Deck an be used as a controller for UAVs and other robotic contraptions. I’m really glad they are not locking the system down with proprietary software.
rickyg32 (RickyG) August 9, 2021, 6:20pm #9

This thing is intersting.
I wonder if you could incorporate a 5.8ghz USB video receiver and maybe a telemetry enabled transmitter of some sort in a 3d printed case on the back.

I don’t see why not. You would either use a video receiver which includes a USB connection or use a video capture device with a standard receiver.

You might want to make sure the 5.8GHz WiFi is turned off on the computer so it doesn’t interfere with the video transmission.

I have a couple 5.8ghz USB receivers, they provide Video to the PC direct over USB.
The one Item I am not sure about is the transmitter system with telemetry. Not sure what device does that.
I notice that there is a docking unit for it. I imagine you could leverage the docking port for a Video receiver and TX unit. Something to watch for I think.

The one Item I am not sure about is the transmitter system with telemetry.

Couldn’t you use a normal Mavlink radio with USB?
As you say, they plan to make a docking unit but even without a docking unit a relatively high speed USB hub should allow multiple devices to be used at once.

I suspect that you could.
Like you say a USB hub and away you go. My thinking is more along the lines of an RFD900. IT has great range and performance while providing you will control and telemetry.
But basically its a USB Mavlink radio.

This might be the link needed to make the Steam Deck into a full RC system.
https://www.rcgroups.com/forums/showthread.php?3945645-1080p-FPV-with-Radio-and-Datalink-SIYI-HM30-FHD-30KM-180ms-FPV-System

Years ago we had a drone fully set up with mission planner , rfd 900 connected to a Dell rugged with a Playstation type controller as joystick controller

Which version?
I preordered the least expensive version since I avoid video games and I plan to use mainly with Mission Planner and similar programs.

I avoid video games since I was hooked on arcade games as a kid and I fear a relapse if I start playing modern games.