Stabilized Camera for a Rover

I want to equip a rover with a camera for FPV driving. Last time I did this the car rode on bumpy grass and the imagery shook alot. Even with various softer gel mountings and weights to increase the inertia, the forward view included every little bump.

Can anyone recommend a stabilized camera system that would smoothen out the view from a rover that drives over grass and sometimes dirt?

I may be wrong, but I would say this task is impossible to solve without a lot of technical effort.
Bumps and gravel produce different low frequency vibrations (or better: movements) with different amplitudes. So to dampen them out, if the car moves up over a 1cm bump for example, the stabilization system would have to move the camera down by the same amount at the same speed (active or passive).
And by up/down, I mean a linear movement not a tilt/pitch rotation.
Perhaps someone else knows a solution.

Thanks Sebastian, you describe the challenge perfectly. I reckon a soft suspension on the rover would help alot. Paul

You should be able to mount a camera gimbal on the front of the rover for stabilisation. You could even hack mount a hand held mobile phone gimbal if you could make the mounting strong enough - most have a tripod screw mount in the bottom of the handle and just fix your camera to that.

This is an old thread and I’m new

I’m starting a boat build and I’ve been looking at servo gimbals like this : 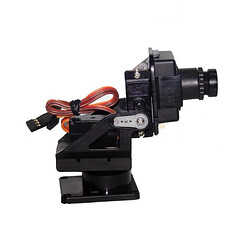 ArduPilot/rover actually has the ability to stabilize a camera servo gimbal as per this in the docs:

The problem I am having is with the vertical component right at the camera mounting point. I’ve since learned that the best way to soften the blows of bumps in the road is to use a heavy car with a soft suspension. Real cars have this, otherwise every time we hit a small bump it would be sent directly up through our spine into our neck.

Yes a ground rover will be bumpy…