Dear developers, I had an unfortunate crash with a large hexa due to a single errorous ppm frame.

I am using the Motor Emergency Stop feature on channel 12 and while flying normally at low altitude the pixhawk received a single errorous frame which caused many channels to suddenly jump. An event was logged to stop the motors, which is as expected, but the event only cleared after approx 300 milliseconds and after this it took a further 600 milliseconds to even start spinning up the motors.

Why does it take so long to even clear the emergency stop event and why are the motor signals not immediatelly restored to their previous values? I am not an expert, but it seems like, that the PID controller stops working and is not executed in case of an emergency stop event. Is it possible to fix this issue? Do you know of any similar cases?

Another thing, that could have prevented the crash would be to only activate the emergency stop when the signal is received for lets say at least 1/4 of a second. Is there any chance this could be implemented in the next release?

My setup is a hexa, pixhawk cube black with Arducopter 3.6.12, RFD868x modules and a Horus. I am already in contact with the RFD guys to check the modems.

Did you have throttle failsafe configured appropriately?

This was not a failsafe event, since the ppm values were different to what I set up.

This is probably a similar scenario to the recent accidental parachute deployment. The discussion then (maybe a week ago) was perhaps aux options that are crash-o-match should require X number of loops or X milliseconds of RC input before triggering. This is probably another good example of that need.

But… When emergency stop was first released years ago, there was a delay. And that was a problem. If you’ve got a big copter flying towards someones head, you want that switch to work IMMEDIATELY.
Although I guess there could be a happy balance, where the switch throw is nearly immediate, but still a short delay to stop one bad frame from causing the problem.

If you’ve got a big copter flying towards someones head

It looks generally wrong to fly a big copter so close to someone’s heads. Having a milliseconds for the emergency stop trigger should not be the reason to do that

IMHO you must fly in a way that even 1000 ms triggering time shall be enough to not to hurt anyone.

I’m not saying anyone is intentionally flying near peoples heads… It’s called “emergency” for a reason… Sometimes things go wrong.
1 second is definitely too long, though. That’s about what it was when it was first released, and that one second could be the difference between stopping the motors and falling onto the ground, and slamming into a building.

We’re not all flying out in the open sky… Some people are doing inspections and flying very close to wires and buildings, etc.

I agree, that one second is too long, but something like 1/4 to 1/2 of a second should be adequate. Another possibility would be to make this a parameter, so everyone could decide for themself.

Why does it take so long to even clear the emergency stop event and why are the motor signals not immediatelly restored to their previous values? I am not an expert, but it seems like, that the PID controller stops working and is not executed in case of an emergency stop event. Is it possible to fix this issue? Do you know of any similar cases?

I don’t see a code path for such a delay so I’m not sure why it would take so long to being spinning the motors again. The code path is basically this:

Could mot_spool_time be a reason? 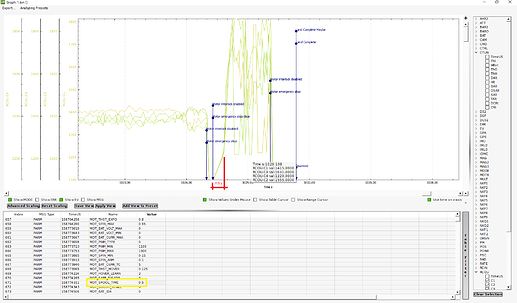 Could mot_spool_time be a reason?

Actually yes. That is the reason. I missed the part where the spool state steps through shutdown to ground idle to spool up then to unlimited. That’s also why you see the line going up slowly from the e-stop being disabled.

Regarding the spool time, you can certainly reduce it all the way to 0 if you want. The idea behind it is to ramp the motors up from a stop to the minimum speed (aka ground idle). On smaller copters, this prevents sudden motor torque from flopping the copter around the ground when arming. On larger copters, it may be of no use. due to the copter’s own weight. Try setting it for zero and see if it handles ok. Or just a smaller value.

Thanks, I’ll definitely set mot_spool_time to 0.

Maybe you also have an idea, why it takes so long to clear the emergency stop?

It appears to be 308ms from the time the motors stopped to the time they began spooling up. I’m not sure what the hz rate of logging is for all of this. So some of that delay is undoubtedly because it happens faster than it gets logged.

Ok, Copter 4.0 seems to have fixed the problem by debouncing the function switches.

I did some ground tests and it seems to be promising. This is with 3.6.12

4.0.png1049×265 4.44 KB
Notice the 200ms delay where emergency stop activates after flipping the switch. Also the short spike won´t activate the event.
1 Like