I have a Skywalker X8 Elevon plane and I wish to convert it into VTOL.

Can anybody give me suggestions about VTOL and selection of appropriate materials for design changes.

Also it is weighted about 3 kg.

Please help me with the selection of Motor, ESC, Propeller and Battery.

Also is it better to use separate batteries for Quad motors and Pusher motors.

Please reply fast and Many thanks in advance.

Darrell, the gentleman who built that frame, is using separate batteries to power the pusher motor and vertical motors. I do the same thing on my own. I personally do it to reduce the amount of strain put on to a single battery. It is better to keep them separate in the instance of wiring failure or other accidents as well as you can recover it via one of the motor sets.

In my design I run two vertical batteries in parallel just to get the extra current, but it’s not necessary if you want to cut down weight. In the future I will probably use only one 5000 mAh 35C. Currently, I use two 2650 mAh 25-50C batteries. Just a forewarning, be very careful with your wiring. The vertical motors are going to draw a significant amount of current, this produces a lot of heat, and consequently your soldering joints may melt. I’ve been there before and I have heard others have as well. You can solve this problem by using XT90 connectors with 10-12 AWG wiring. For my pusher battery, I use one 8000 mAh 30C battery.

If you want more information regarding ESCs and motors check out my post outlining my design. Darrell uses those same ESCs and they work very well. The motors I have on right now have plenty of thrust and the plane is about 5-6 kg.

Just a note on design. The design which I used is easier and cheaper to implement, HOWEVER, I would recommend putting in the extra work and money to get the wing extensions as you will be able to get a longer flight time and higher carrying capacity due to the increased lift. Sanders Smeet uses the same wing extension design in his product as well.

Thank you very much for your fast and honest reply.

All these information are very helpful for me.

As a beginner in VTOL, I request you to share an idea to configure the RC Remote for VTOL.
I’ve used Fixed-wing and Quad-copter separately and this is the first time to use the Combination VTOL.

I just noted down the changes in the Mission Planner parameters and need to try it. But no idea about RC Remote configuration. Currently I’m using Taranis X9D Plus for Skywalker X8 and using channels 1 to 3 for Elevon and Throttle and channel 4 for Flight modes.

Earlier for my Ranger Ex, used channels as default for a normal fixed wing and same for a Quadcopter.

I’m eager to know about the controlling of VTOL using the RC Transmitter.

Many Thanks in advance.

Just configure the same channels as you would for a normal fixed-wing. Then use ArduPlane’s FLTMODE_CH to assign an auxiliary switch to toggle between flight modes, which will allow you to switch between fixed-wing (FBWA, MANUAL, etc.) and VTOL (QSTABILIZE, QHOVER, etc.) modes. Once this is done, when you switch from fixed-wing to VTOL mode, the firmware should do the necessary mixing for you to control the VTOL, using the same sticks which you use to fly the fixed-wing. You do not have to do any complicated setup on the transmitter to control the quad motors.

Maximum of 6 Flight modes can assigned and should I use 3 modes for Fixed wing and another 3 for Q parameter(Quad_plane)?

That depends on your preference, some users prefer to stick to 2 or 3 flight modes since most transmitters only offer 2 or 3 position switches.

To control up to 6 flight modes, you will need to look into mixing 2 different switches. How to do that depends on the transmitter type. For the Taranis X9D, this might be what you are looking for (but no guarantees it is what you want, as I don’t use the Taranis): https://diydrones.com/profiles/blogs/frsky-taranis-setup-6-flight-modes-plus-1-for-apm-ardupilot

I mixed two switches on my Taranis. If I remember correctly, you shouldn’t use the Manual mode as you will have problems arise. The main modes which I use include:

Hello all, I recently received a question regarding my design for my Skywalker VTOL design, so I made this post to outline my design and some tips that I have for those interested in implementing it. The original design idea came from Sander Smeets: http://px4.io/portfolio/quadranger-vtol/ Here are a few pictures of the bottoms of my wings: [New photo by Evan Palmer] [New photo by Evan Palmer] The design specifications are here: Booms: Carbon Fibre Square Tube 15 X 15 X 500mm htt…

Calculation Details for Quad is below.

Can any one give me an explanation? 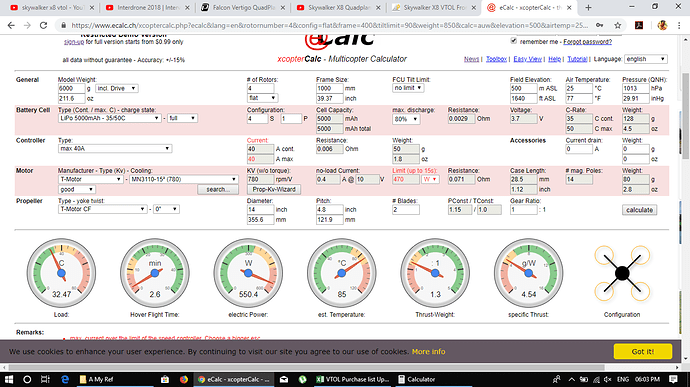 I’ve chosen some other size motor and battery, I calculated with my spec and I got same results (Don’t have the screenshot).

For an AUW of 6kg, I do think that a 6S set-up would be a better choice. Since you are going for a separate lift-thrust (SLT) design with two different batteries for VTOL and cruise, ideally you would only need about 30-40s for vertical take off, and 30-40s for vertical landing, and that still leaves you some juice in your lipo according to your ecalc calculation (I note that your max. discharge is set at 80%, which is more than safe). However, I would recommend changing your motors and re-evaluating the set-up on ecalc. Thrust-to-weight ratio of 1.3 is insufficient imo, and plus these motors don’t seem to have the capacity to supply the power required for hovering.

That looks right to me. As Aeroakam mentioned, vertical flight times need to be kept quite short. However, I found the 3510-700kv tiger motors a bit small for my projects and moved up to 3520-11 400kv instead. With that low of a Kv I had to use 6S batteries and a larger prop.

If you want to stay with 4S that’s fine but I’d consider a much higher Kv motor. I’ve just ordered 4 SunnySky X3120-1100 Kv motors as I noticed that the commercial version of the Skywalker from Vertical Technologies uses those specs and seems to fly well even with 12" props. ECalc shows good results with them as well.

Remember, if you use 4S for the vertical motors you will have very high current, so make sure you use suitable wiring. You will probably need to go up to 60Amp ESCs as well. I think Evan Palmer used 4S motors from HobbyKing and they seemed to have plenty of lift when we flew it together a few months ago.

Can you suggest me a good set of motor, ESC, battery and prop?

I already have T motor 400kv and 15" prop with me and after reading the ardupilot forum about one Skywalker VTOL build, I thought of purchasing 3510 and 14" prop with 4S battery and 40A ESC.

What I need is to lift 6kg of total weight. After reading your recent comment, I understood that with a 400kv motor, I may need to use a 6S battery with 15" prop and 40A ESC.

I request you to suggest me few best combination to lift this 6kg.

I can’t recommend you the best as I’ve only tried a few combinations. I can tell you that the T-motor 3520-400Kv has worked for me with 6S battery and 16" props. However, I would prefer smaller props and I would like to test using just 4S so I’m going to try the 1100kv SunnySky motors with smaller props in my next build. Those motors are lighter than the T-Motors as well. Quadplanes have only been around a few years and every build is different so there aren’t any hard set recommendations that I know of. There’s still a bit of experimentation required.

In my next build I’m going to make the wing extensions easily detachable and connect my motors in a way that it isn’t too difficult to change them so I can compare a few different motor/prop combinations. It will also make it easier to replace in the field in case of damage.

I also put my vertical motors on a separate battery to ensure I always have enough left for landing. Others put their vertical and forward motor on the same battery circuit. You have to decide for yourself which you prefer.

Search the postings for other builds, get all the info that you can, and then decide what you think will work best for your situation. When you are done, please share your results with others.

Thank you sir. I need to do some more researches and after that I’ll start my work. I’ll post once it is completed successfully.

I am using SunnySky x3520 520 KV motors on a tilt rotor plane with 13x8 props and they appear to work like a charm. Depending on your AUW, may be you could use even smaller props. 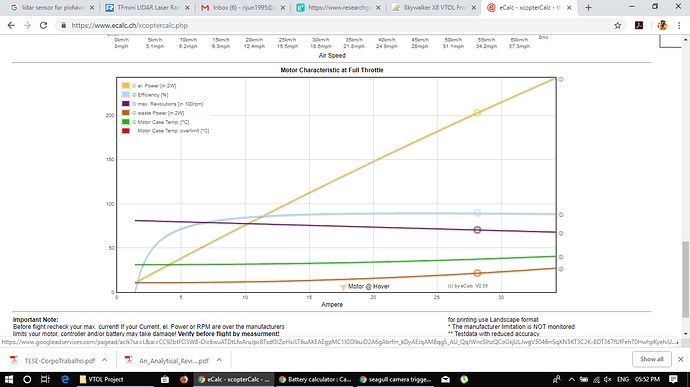 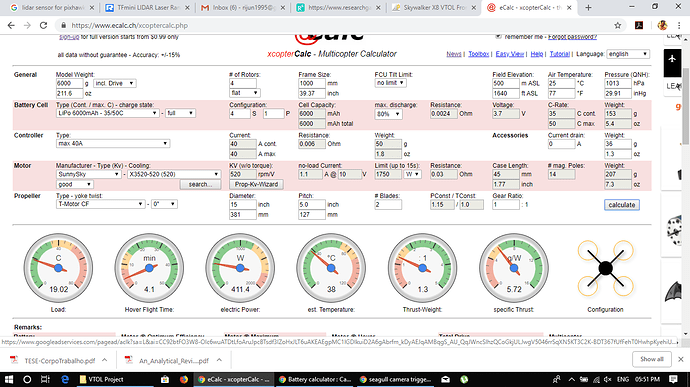 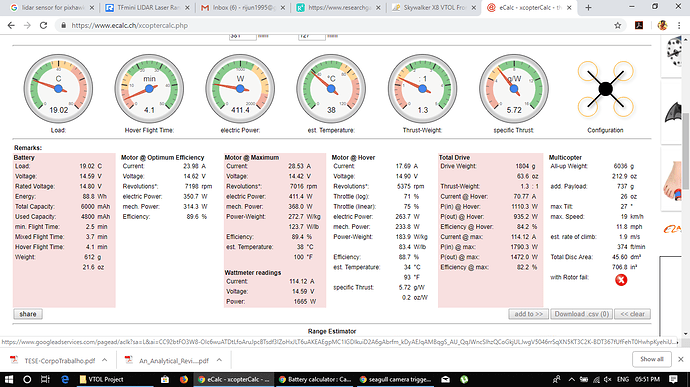 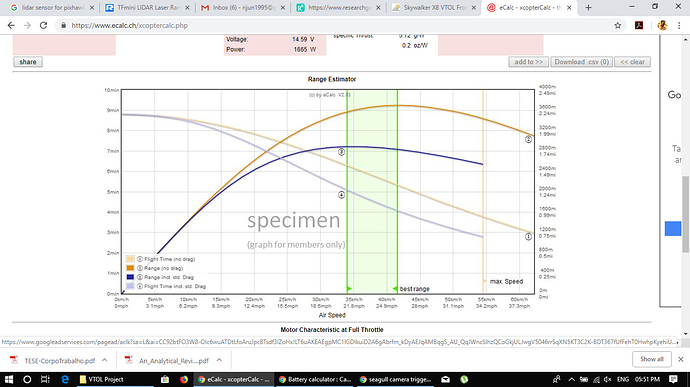 Are you certain about having a thrust to weight ratio of 1.3 for the quad motors? Quadplane have the luxury of quad-assisted recovery (q_assist or qstab) should the plane stall (for example), but for these to work effectively, the quad motors shouldn’t be underpowered. In your case, switching to 6S is beneficial in two folds: firstly, your quad motors will produce more thrust, and secondly, you should be able to produce sufficient thrust (e.g lift to weight ratio of lets say 1.7?) using relatively smaller props, which means less parasitic drag in forward propulsion (and that equates to increased flight time). This is my personal opinion, may be you have other design preferences?