Showing as in stock at Target! 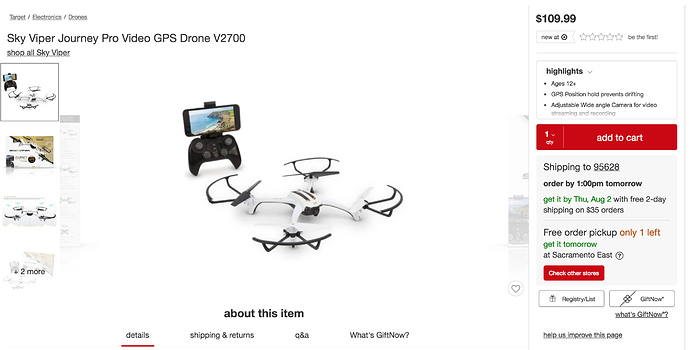 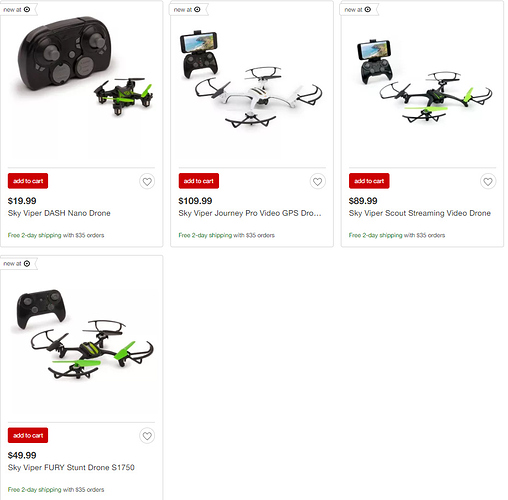 But no waypoints, right?

The Journey Pro would same as the 2450GPS. And that craft is available cheap.

What are the upgrades on the Journey from the 2450GPS?

Based on what i’ve seen in the App screenshots (Sky Viper Video Viewer 2.0) and the box labels, it doesn’t appear they have enabled Waypoints guidance as part of the “official capability set”. I’m sure you can still do it of course, just takes the same amount of manipulation as the 2450GPS. Use Tower or QGC or MissionPlanner to upload a flight plan and set a button to Auto mode.

Based on some comments from @Matt_M he said they’ve improved the camera a bit and stability as well. Plus the addition of all the new “profiles” which make changing flight characteristics much easier. There are several other improvements in the code I believe. Other than that, I’m not sure what the added benefits are of this over than the 2450GPS, except maybe the “1 Year of free parts” guarantee

By the way, I already tried syncing the new Skyviper app with the 2450GPS…didn’t work.it recognizes it as not the correct build. Also, the Journey GPS firmware won’t load tot he 2450 either…well…it loads…but then it don’t do nothin!

OK, thanks. I pretty much just use Mission Planner anyway unless I need to grab a log or update firmware. But I don’t suppose I’m the typical user so the new App is probably a big plus for most.

Big question! Does the app have better code for battery voltage detection? Really wish they went the current measurement route.

Does anyone have a copy of the full instruction sheet, including the full specs and estimated battery run time, etc.? I’m seeing it in videos but not with sufficient resolution to actually read it, nor am I finding copies via obvious searches. Thanks!

If you Google “Sky Viper Journey manual” the 1st result is the FCC site showing the user manual and a lot of other data. Whether it’s the latest product release manual I don’t know.

Ok so I just brought one been waiting for this for a year now and here’s what I sent to skyviper
Update only allows me download and switch back to drone connection then skip and update becomes options I can only tap skip update does nothing. Try to use the waypoint it goes as far as excuting mission stand bck i don’t know why it says that cause nothing happens. Smh I’ve quite disappointed because I’ve waited for this drone to be in stores for
A year and I have one or more of ever drone that skyviper makes except Spiderman w cam. I was really looking forward to this one and it doesn’t seem to be better than v2400gps plz help me I already took one back to Target thinking it was a dud but same thing
With this new one also. However it does do stunts also range is way better with and without the cam running wifi quicker gps find and longer battery life oh also follow me mode and u can choose to go home or go to cell phone which saves you the walk back to land but I still can’t install the update and the waypoint feature won’t work​:tired_face:

I was really looking forward to the way point skyviper needs to fix this quickly SMH. EXPECT MORE OUT OF THEM#DEVOTED/LOYALCUSTOMER

Neither the Journey, nor the V2450GPS had “advertised” waypoint navigation. The Skyviper video Viewer 2.0 (did you get the new one?) app doesn’t include waypoint navigation functions. It includes Return to Home and Follow me features only.

The way to get them to do waypoint navigation is to use Mission Planner, or QGroundControl, or Tower, or other to open up the “inherent possibilities” in the underlying ArduPilot flight stack.

As I said, I don’t understand what you wrote, so i’m having a hard time figuring out what your issues are with the quad, but I’d love to try to help.

To fly waypoints with the Journey Pro is it necessary to modify parameters similar to the 2450GPS as discussed here and elsewhere on these boards? As for GCS I’ve only used Tower so far.

What?
A couple things as I have flown many missions with my 2450GPS and the Journey is likely the same in this regard. I use Mission Planner (UDP 14550):
Obvious-Set a flight mode for Auto and a switch on the Tx to activate it.
You may have to set the SERIAL1_PROTOCOL to MAVlink 1. Default for the Sky Viper is MAVlink 2 and some GCS’s don’t like that.

Waypoints and missions ARE supposed to be working in the new 2.0 app, yes. Accessible in the map window.

We had this working right up to release, then oddly on the release version, it wasn’t working anymore. The dev is working hard on the issue to try and get it resolved quickly.

Apologies for it not completing the execution of the mission. we are working hard to resolve it.

I’m curious about the electronics in the new V2700 and how it differs from the V2450 GPS. I haven’t noticed details yet in the wiki. I know the camera module is different. Are there other functional changes in the Sonix module? From the FCC photos, it looks like the GPS module includes a battery this time. Does the shipping version include it? Perhaps the idea of storing the Ephemeris data externally caused support issues? It looks like the flight controller board has changed significantly as well. Are there any meaningful functional changes there? I see debug/programming pads. Are all the extra pads for USB, power module, extra serial, etc still present?

first post here. first drone as well. wondering if someone could help me out here. my sky viper v2700 journey will just drop to the ground. it also says something about gps lock lost while its falling.

@Matt_M any update on the waypoints or missions? how about a user tutorial on the app?

Sorry, but no great news just yet. We are still tracking the issue and are trying almost daily builds to get it going. It’s frustrating, because we had it working right up until release, then some other fixes went in and it’s not functioning anymore. We are working very hard to get the issue resolved, but it’s being problematic, as it still refuses to work as it did before even when we revert back to the original versions where it WAS working.

On the plus side, we have new fixes coming out for map data fidelity, as well as some support for non-traditional screen resolutions, etc. Those will be coming soon.

dkemxr’s comment is solid, though, so you CAN get this working through other much more robust apps in that dept and if you need missions, I’d go that route for now.

2 Likes
next page →
Servers by jDrones