This topic is intended to be a wide thread sbout the setup of my 900mm quad. It’s a discussion about experimenting with ardupilot and learning more about the firmware and it’s capabilities.

It’s also a follow up on a previous topic:

Yes, if you think a new topic is needed. I agree this titled one was tapped out a long time ago.

Since that topic got a bit out of context regarding the title I made this one. It may be hard to follow the begining of this thread unless you have read the ending of the other one.

This topic will be updated with the first post when my initial test with the new 18 inch propellers have been conducted!

Why are we going back to Copter 4.0 - the original thread was under Copter 4.2.

oh, thanks, klicked the wrong one!

I’m not sure how to use ecalc, I know it should be really easy but I always get red-flags even when I put in my configuration which I use and that works well.

Could you test how heavy ecalc says I can go with 18 inch propellers and that motor if you got the time? 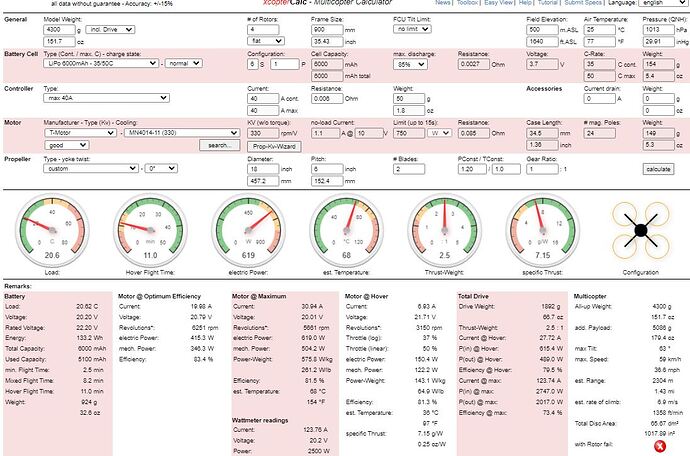 I did a test-flight with the new 18 inch propellers. It worked great! I did some throttle punches and some rolling and pitching. The vibration problem seems to have gotten a bit better by switching propellers.

Could you check the log and see if you think it got worse or better, if you got the time!

Looks good. Nothing else to do but fly it.

It has some yaw overshoot though. If I input a fat way movement, and than command a stop. It will overshoot quite a bit and than yaw back to where it wanted to stop.

What could cause this? To high P gain? Or is the I gain to blame?

It’s at 20700 as of now. Should a higher value work better? I thought that it needed to be lowered because the copter achieved to high yaw speed, and couldn’t stop in time?

What could cause this?

Increase ATC_ANG_YAW_P. If that doesn’t do it add some ATC_RAT_YAW_D. Not much maybe .015.

What do you think about the yaw acceleration? Could it help if I increased it?

I see, ATC_ACCEL_Y_MAX is already reasonably high - I’m used to Autotune giving a conservative value for this.
I’d try Daves suggestion, increase these and see which has the desired effect, since they are all a bit on the low side
ATC_ANG_YAW_P,5.5
then
ATC_RAT_YAW_I,0.05
ATC_RAT_YAW_P,0.5

My hober thrust also changed. I’ve ser the new valuew tof the hover parameters. The new hover thrust was about 0.14 a bit higher. I thaught it would be lower sonce I have larger propellers?

I did a test flight and changed the parameters you guys suggested. I didn’t get it good enough but better. I changed the ang_p to a higher setting. Also tried to lower it and than higher it a lot. Not much difference. But left it at 5.5 for the last test. I also changed the PID P and I values. I increased them but the overshoot/bounce-back didn’t dissapear, it only got faster, sort of more aggressive.

I also noticed an oscillation when I break from a high speed (tested in alt.hold). I tried lowering the pitch and roll pids, since I thought it was to tightly tuned. It helped a bit. But I lowered both P and I so I don’t know which one did the difference.

I increased the D on pitch and roll also since I noticed a small oscillation when a small stick input was done. But the entire drone started to oscillate fast, so to high, I lowered it again.

In loiter, if I make a small stick input, like a twitch it starts to oscillate for a couple of seconds.

Summary:¨
The changes on yaw parameters helped a bit but not enough
Oscillation during hard breaking (to tightly tuned?)
Oscillation on small twitch stick input in loiter and a small one in alt.hoald

I’ll conduct a test-flight later today. I’ll focus on getting yaw stable and firm this time and look into roll and pitch later if you guys don’t have any reason to why I should do something else.

Edit: I think I’ll try an auto tune for pitch and roll if I get to charge my batteries as well

I would do pitch and roll first, that will probably help yaw somewhat too.

I’ve conducted a test-flight. I didn’t see you message Shawn, hence I started with some yaw tuning. It was some gusts and mild wind so no auto-tune.

The log file is a test flight conducted after my tuning and experimentation. Since I’m not that good at tuning, it mostly consists of me changing the values and valuate visually.

Test flight:
I started with some general flying to make sure that everything worked as expected. Than I flipped in and out of loiter. I did this as a marking in the log to where my yaw tests begin.

I started with some small input, than moderate and large yaw movements. There is still some overshoot though.

Lastly I did some throttle punches, to see if yaw was affected. I saw no yaw movements but when I pushed hard, I heard a strange noise, like bam bam bam. I suspect it could be a motor esc timing issue. 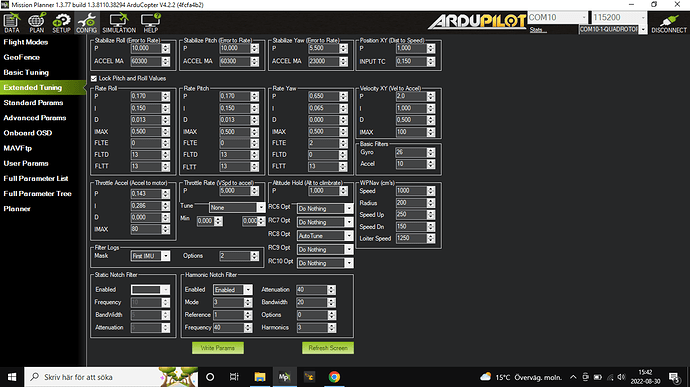 Maybe you guys could take a look,

Edit: I’m still flying on 4.0.2. It should not have any effect on this since it’s just a tuning issue. I’ll update to 4.0.3 as soon as I have the drone at a place with god internet.

You wrote the stabilization algorithms right?

Maybe you could take a quick look. if you got the time of course!