My thought would be to connect the two wires to vcc and signal. When connecting this to the GPIO port on the back, do I connect them to the ground/signal pins or the VCC/signal pins.

Just come to think about it, did you try to swop the wires?
I remember only one way worked, but can’t remember which way.

Hello, new guy here I created an account to make you aware of this project if you weren’t already. https://blog.sotonsailrobot.org/
They use small magnets in a wind vane to over drive a magnetometer and get wind direction. Very low friction if you balance it well. Anyway seemed relevant as the ultrasonic stuff is pretty expensive.

I’m aware of the lads down at Southampton, its a neat idea, we do already support loads of compasses, it maybe quite easy to add it as a driver back-end. I think the tricky bit is to try and stop the code useing it for navigation, there is lots of code to failsafe between compasses ect. Would probably need a new calibration method too.

Thank you, great stuff here. I’ve been walking the ROS path but probably going to switch to ardu based on what I’m seeing here. I also found this interesting as you no longer have to care about wind direction. https://youtu.be/_QEu__46rQo

I thought I should give a little update now the GSoC period has finished. You may have seen my conclusions blog post.

[PNG] Over the last three months I have been been working on improving rovers sailboat support. Although it has not been entirely plain sailing I have been working hand over fist on various improvements. [log%20Auto] Before we set sail with a over view of what has been achompised on each of my goals. I will give some background on the above image, this was a sailboat auto mission with only a single waypoint. In order to constrain the boat within the bounds of the river a polygon Geo Fence wa…

I have finally managed to get the video from that mission edited, this is in real time

@rmackay9 and I are working to get these improvments into ArduRover, once they make it in I will update the wiki to document all the new stuff.

The bits and pieces that did not make it in have not been forgotten, they will make it in over then next few mouths hopefully.

Lovely!
The boat seems dangerously close to the edges of the river before it tacks upwind.
Not really dangerous, but risking to get caught in sea weed etc maybe…
Did you tack it by manual switch if it got too close?
A standard gps would have some ± 5m lateral drift, but maybe you have the new more accurate ones?
I like the wind indicator in the upper right corner.

I did occasionally tack maunaly, not that often tho, for the most part it is in auto. The main issue is the accuracy between the map and real life. I laid out the fence on the map but in real life it was abit to close to the banks. There is a parameter for the boundary to leave, I did turn this up later and it worked better but the wind dropped before I could film it. Its just a cheap GPS, the EKF does quite a good job of minimising the drift.

not yet, but coming soon

problem 0: Pull up from vcc to signal was applied first. This did not result in any readings. I never removed it after I tried other things because once I got it to work, I didn’t care. So I can’t say definitively this “fixed” it.

problem 2: Because we use an RPM scaling factor that is on the order of .01, the RPM_MIN, RPM_MIN_QUAL and RPM_MAX values need to be adjusted. That is why my cups anemometer was not reporting anything. The times that it would pic a number and stay there, must have been when a the cups did a “double tap” and that frequency happened to be in the reportable range. So I had to set RPM_MIN and RPM_MIN_QUAL to .01

So, finally, I may be able to record some sailing data. This weekend we will have 20knots sustained with gusts to 30 knots! I hope to have some data to share.

Great to hear you are moving along to sailing.
I have had many weeks of no wind 1+2 m/s but hopes more is coming when moving to autumn here.

well, this morning I soldered everything together, and now it’s not working. Too frustrated to carry on. Free pixhawk, anemometer, wind direction kit. You pay shipping.

yeah that happens sometimes, often with fresh eyes you can spot the mistake. If you post some pics we can take a look. What are the symptoms?

symptoms are sadness, frustration, feeling of disappointment…Oh, the pixhawk…just a solid 0 reading all the time on the wind speed. All I did was go to sleep, wake up the next day and solder together the setup I had tested with twist wires. I’ll have another crack at it next week because as much as I want to record data while sailing, my real priority is actually sailing

Hi Peter
I would like to add a calypso wind sensor on my boat (not a sailing boat) to monitor wind speed and direction. Would it be possible to have the Wind vane supported for Rover boat too?
Thanks

Wind vanes are supported for all rovers, just set the enble parameter. You will get the wind speed reoprted to your gcs over mavlink. However logging to SD card is only enabled for sailboats currently. This is a very easy fix tho.

Its been gusty from 3 to 8+ knots with shifting wind directions unfortunately, but still got some readings i wanted. 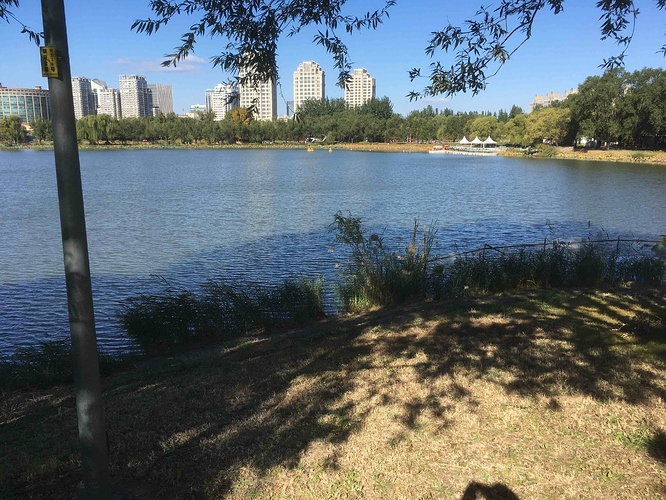 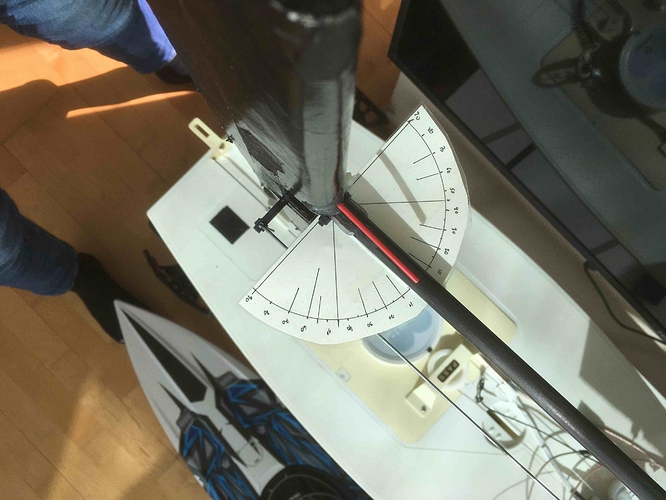 Then checking the resulting degree change of the wing. 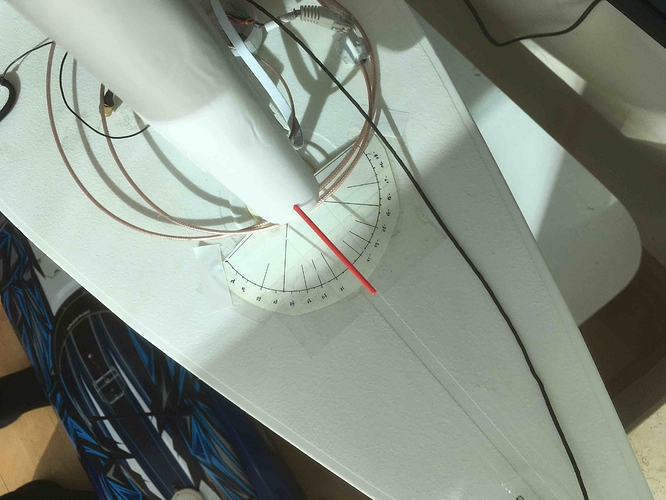 These are my findings after running average outcome of 10 tries:

The conditions for tomorrow Saturday is also pretty good, so I will try to sail it!

However, at this point I am really not sure what this mean, some of my questions

I don’t expect anyone to help me here, not many sailing laser with wing sails around I assume, just want to share my thoughts…

great! I have actually done the wing sail code.

I can build it for you, what flight controller are you using? This code just puts the flap at either max or min depending on the tack. It then moves it back to towards the centre as the boat tips over. I’m not really sure if this is the best method but we can always improve it.

Holy, you are fast

Well, I think I need more explanation on how this should set up to work ( really sorry )
my plan for tomorrow is just to sail with Acro mode that will basically keep the steering cource straight and not tamper with the sail since there is none

Then try to learn what happens when I sail back and forth with speed etc
I will manually do the adjustment of the Flap angle.
Take your time and do the proper development and documentation.
I will help you in anyway I can
best
K