Rover-4.0.0-rc1 has been released and can be downloaded using the ground station’s “beta firmwares” link. The changes vs 3.5.2 are in the ReleaseNotes and also copied below.

It’s been several months since our last major release so there are actually many improvements not listed above. If people notice items that I should have mentioned please feel free to write them below and I’ll update the list.

Apologies in advance that we haven’t updated the wiki yet but we will get to this over the next few weeks.

Thanks for any help you can provide with testing, please leave comments (positive or negative) below and we will try to resolve them!

I’m using the boat tomorrow in a safe environment for new firmware. If it pops up on mission planner in the next few hours I will give it a try.

I would love to test it but leaving in the morning for 3 days of mapping.

After update a compass calibration was required which is easily done with my Rover. All modes worked well and a few km mission (several big loops) ran perfectly. The Delay command works. PixRacer FC on a conventional steer vehicle.

I have been waiting for this release before adding a sensor for object avoidance, that’s the next step.

Were you forced to recalibrate the compass?

Great to see the new release, congrats @rmackay9 !
Any chance the BlueRobotics Ping sonar is also included in the sensors?

This is great news & I’ve been waiting for this since seeing the YouTube uploads by Randy.
Wanted to ask if the following Mini Lidar is compatible with the new firmware running on a Pixhawk 2.1: 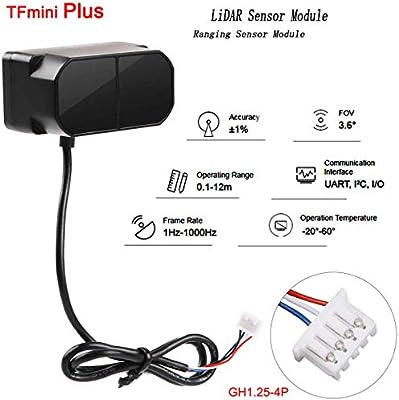 If not then please recommend me another & I can use the new firmware. Many thanks & well done to the team

Yes. It wouldn’t arm and gave the compass not calibrated message.

The TF Mini has been supported in Rover.

I wonder if I could just go into the parameter list and enter my old numbers?

A good experiment would be to do that and then run compass learning and see the difference! I was going to try that but I can do a cal on the Rover easily enough so didn’t.

@John_Easton, yes, I’m especially looking forward to your testing of the SPEED_MIN parameter. This was specifically added so that we can handle boats that plane better (I have one too). I think if you set this parameter to 3 or 4 (slightly above whatever your boat planes at) then it won’t slow down unnecessary in corners.

@ArduNoob, yes the Benewake TFMiniPlus is supported in this release. The only thing to be careful of is the lidar itself must be running firmware version 2.0.2. Hopefully it will just work but if it doesn’t it may be that the lidar’s firmware version needs to be updated. I haven’t done that personally nor is it documented on the ArduPilot wiki (yet) but it is apparently possible (@lucasdemarchi has done it)

Correction: it needs version 2.0.3. I didn’t test on a Cube since I don’t have one, but it should work fine.

Also, this sensor can be on I2C or UART mode. The one implemented in ardupilot is the I2C.

When you switch the sensor to I2C mode, make sure you then update the parameters with the same address you used in it.

HI,
I’m anxious to test it. Do you know if it works RPLIDAR A2?

@ecabanas, yes and we have a wiki page with the setup details for the RPLidarA2 here.

greattttt!!! thank’s for these extraordinary job

Just downloaded it and all my calibrations remained

. I’ll have the boat out next week again. The beta update appeared on mission planner yesterday after I had already loaded up the boat in the car. @rmackay9. One question about loiter gain. In the past with Ackerman steering the boats throttle in loiter was perfect but the steering went from full left to full right a lot. Does this gain adjustment effect both throttle and steering the same with using Ackerman steering. Just asking. I will find out next week. 20 pages of parameters. WOW. I remember when it was like 6 or 7.

The loiter speed gain parameter only affects the speed. The issue with the steering going full left or full right is probably because the vehicle is travelling very slowly and with the steering output inversely scaled by speed, a low speed leads to a massive steering output. We should probably raise an issue in the issues list for this… perhaps we need some kind of dead band in the desired heading (i.e. let it be off from the target a bit).