Rover-3.2.3-rc1/rc2 has been released for beta testing and you should be able to download it using the Mission Planner’s “Install Firmware” screen’s “Beta firmwares” link within the next few hours.

This change includes the following changes over 3.2.2:

The first change is probably the most important because it fixes the issue in how we were calculating the “origin” of the track between waypoints. The red line below shows what we were doing, the green line shows what we do in 3.2.3. 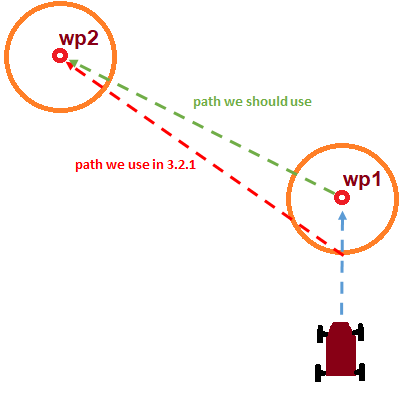 Here’s the difference shown in the simulator when large WP_RADIUS values are used. There are other bad effects though that come from this bug:

Any and all testing of this beta would be greatly appreciated. If it seems OK after about a week of testing I’ll push it out as the official release.

P.S. if you’re wondering why we’ve jumped to “-rc2” it is because I initially forgot to include the two-paddle input in the release. Normally we add any commits or PRs we intend to “back port” into the latest official release in a GitHub project but we missed this one.

Much better for me!

Update 1: I also noticed the reverse improved. The slight shimmy that occurred just before the rover would reverse direction is now a smooth transition.

Update 2: Still having a few shaking wet dogs when going into reverse, but that may be just my tuning.

Excellent! Thanks for the feedback!

Here is some more feedback on reversing while using this version.

When going from forward to reverse, there is a little shimmy during the for-rev transition.

But when going from reverse to forward, its more of a wet dog shake (as much as one time 30 degrees rotation depending on parameters) during the rev-for transition.

Here is a link to the log file: https://1drv.ms/u/s!AsZN_h-c802JjQ8PqiQsN2ijCrAd

This is a very important upgrade as our goal going forward is to be able to create perfectly parallel lines while recording SideScan sonar for a mosaic overlay on our FishTec HD Fishing Charts.

Also remember you need to arm the vehicle to make the motor move.