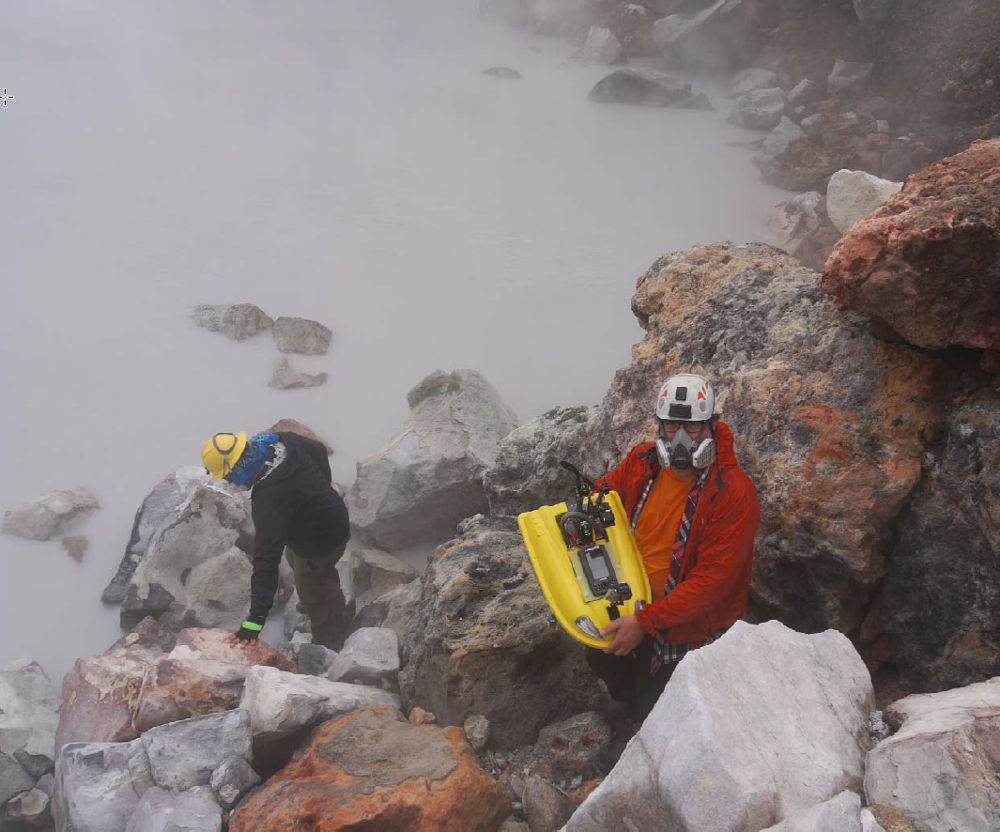 The ArduPilot development team is proud to announce the release of version 3.1.0 of APM:Rover. This is a major release with a lot of changes so please read the notes carefully!

A huge thanks to ALL the ArduPilot developers. The Rover code benefits tremendously from all the hard work that goes into the Copter and Plane vehicle code. Most of the code changes in this release were not specifically for Rover however because of the fantastic architecture of the ArduPilot code Rover automatically gets those enhancements anyway.

Note that the documentation hasn’t yet caught up with all the changes in this release. We are still working on that, but meanwhile if you see a feature that interests you and it isn’t documented yet then please ask.

The Release Photo Above:
This is a 300 m wide lake.
The water temperature was 55 C
The pH was 0.5 - the same as battery acid
There were a lot of phreatic explosions in the middle of the lake.
The yellow rafters are sulfur.
Gasmasks were necessary because of the very high SO2 concentration.
It was also very hot.
The boat is designed for mapping an acid lake. That’s why no prop in the water and nearly no metal parts.
And the AutoPilot - ArduPilot of course - no other AutoPilot will do.

[image] Hello sonar boat designers My new sonar air boat project is nearly finished. The boat is build from an old bait boat. The brains are a pixhawk controller. The motor and prop (12 x 4.5) are rather large but that seems to be a good thing. In the old design there was an 10 x 4.8 slow fly prop and a smaller motor with a power consumption of 3 A for a speed of 3 km/u. With the new prop we have 1.6 A with the same speed

The PX4-v2 build has had CANBUS support removed due to firmware size issues. If Rover users want CANBUS support you will need to install the PX4-v3 build located in the firmware folder here:
http://firmware.ap.ardupilot.org/Rover/stable/PX4/

EKF1 has been removed as EKF2 has been the long term default and is working extremely well and this has allowed room for EKF3.

EKF3 is included in this release but it is not the default. Should you want to experiment with it set the following parameters:
AHRS_EKF_TYPE=3
EK3_ENABLE=1
but note it is still experimental and you must fully understand the implications.

Rover now accepts a new message MAV_CMD_NAV_SET_YAW_SPEED which has an angle in centidegrees and a speed scale and the rover will drive based on these inputs.

The ArduPilot team would like to thank EnRoute for the sponsoring of this feature
http://enroute.co.jp/

The ArduPilot team would like to thank EnRoute for the sponsoring of this feature
http://enroute.co.jp/

Its now possible in a mission to tell the rover to drive in Reverse. If using Mission Planner insert a new Waypoint using “Add Below” button on the Flight Plan screen and select from the Command drop down list you will see a new command “DO_SET_REVERSE”. It takes 1 parameter - 0 for forward, 1 for reverse. It’s that simple. Please give it a try and report back any success or issues found or any questions as well.

The ArduPilot team would like to thank the Institute for Intelligent Systems Research at Deakin University
(http://www.deakin.edu.au/research/iisri) for the sponsoring of the reverse functionality.

This changes brings the LOITER commands in line with other ArduPilot vehicles so both NAV_LOITER_UNLIM and NAV_LOITER_TIME are supported and are actively loitering. This means for instance if you have set a boat to loiter at a particular position and the water current pushes the boat off that position once the boat has drifted further then the WP_RADIUS parameter distance setting from the position the motor(s) will be engaged and the boat will return to the loiter position.

The ArduPilot team would like to thanko MarineTech for sponsoring this enhancement.
http://www.marinetech.fr

Note: if you currently use Param1 of a NAV_WAYPOINT to loiter at a waypoint this functionality has not changed and is NOT actively loitering.

Rover can now detect a crash in most circumstances - thanks Pierre Kancir. It is enabled by default and will change the vehicle into HOLD mode if a crash is detected. FS_CRASH_CHECK is the parameter used to control what action to take on a crash detection and it supports 0:Disabled, 1:HOLD, 2:HoldAndDisarm

This release adds support for the IMU heater in the Pixhawk2, allowing for more stable IMU temperatures. The Pixhawk2 is automatically detected and the heater enabled at boot, with the target IMU temperature controllable via BRD_IMU_TARGTEMP. Using an IMU heater should improve IMU stability in environments with significant temperature changes.

This release adds support for the PH2SLIM variant of the Pixhawk2, which is a Pixhawk2 cube without the isolated sensor top board. This makes for a very compact autopilot for small aircraft. To enable PH2SLIM support set the BRD_TYPE parameter to 6 using a GCS connected on USB.

This is the first release of ArduPilot with loadable module support for Linux based boards. The AP_Module system allows for externally compiled modules to access sensor data from ArduPilot controlled sensors. The initial AP_Module support is aimed at vendors integrating high-rate digital image stabilisation using IMU data, but it is expected this will be expanded to other use cases in future releases.

This release includes a major merge of support for the VRBrain family of autopilots. Many thanks to the great work by Luke Mike in putting together this merge!

Boot times on Pixhawk are now much faster due to a restructuring of the driver startup code, with slow starting drivers not started unless they are enabled with the appropriate parameters. The restructuring also allows for support of a wide variety of board types, including the PH2SLIM above.

This release includes many other updates right across the flight stack, including several new features. Some of the changes include:

Thanks @gmorph for the this featured release. Can’t wait to try a Pixhawk 2 and the Loiter mode on my next build!

Is Loiter an actual “flight mode” now or to use it does one need to be running an Auto mission.

You need to be running an AUTO mission. You can either set Parameter 1 of a waypoint to be the number of seconds you loiter for - this was in the previous release and hasn’t changed - note this isn’t an active loiter. Or you can use the NAV_LOITER_TIME command to specify how long you want to actively loiter for.

Cool, I love the loiter support and can use this most certainly for my bait Boat!
Keep up the great Work!

Very useful and thanks