I am starting the build of a new ArduBoat and am hoping I can get some input on hardware. I have not wired anything but will start the build in the next few days.

I have the new RFD900x with the TXmod JR module, Jumper T16, and Matek F405wing. This will all go into a 24" boat with a custom built seafloor mapping sonar as a research project.

Since the RFD900x TXmod and Jumper T16 are relatively new, I cannot find much information on how they will work together (which is why I thought it would be interesting to try). I have the Yaapu widget successfully installed on the T16 but I am not sure how to setup the T16 for telemetry since I will not be using an RC receiver with telemetry output.

I know that it is suggested to power the RFD900x via a separate BEC when using a PixHawk FC but it looks like the F405’s internal BEC can handle 2 amps which should be sufficient for the 800mA the radio needs. I am already powering the sonar and micro-controller with a separate BEC and would rather not add additional complexity unless needed. Not sure if the recommendation is due to noise or current draw. Any suggestions? 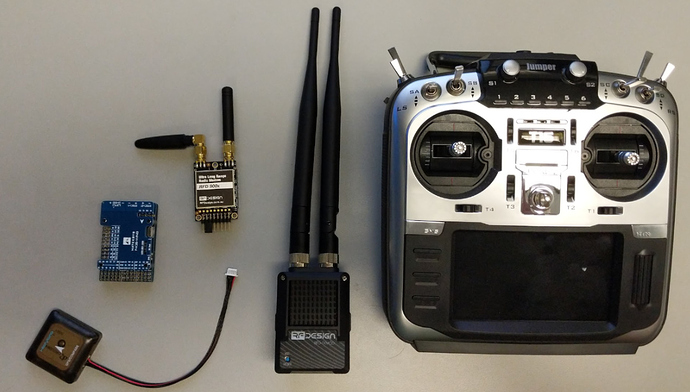 I’m also running the TXMOD combo but on a taranis X9D and also using F405s in various vehicles. I run the 900x straight off the 405 and haven’t had any dramas with power consumption although I do power all of my servos on a separate BEC. The only way I’ve found to get telem on the TX is using a teensy 3.2 tied into the TX/RX lines in the TXMOD and feeding them into the s.port pin on taranis. It’s a pain to setup but worth it for telemetry

Thanks Matt. Figured I’d have to do something like that. I see that the S.Port female pin on the TXmod module is missing. Did you glue in a female jumper cable connector on the bottom s.port pin and install the teensy inside the module? Where did you tap into to power the Teensy? I see the TXmod board has an open +5v/gnd that would be easy to power the teensy off of.

Mavlink to FrSky Passthrough protocol telemetry . Contribute to zs6buj/MavlinkToPassthru development by creating an account on GitHub. 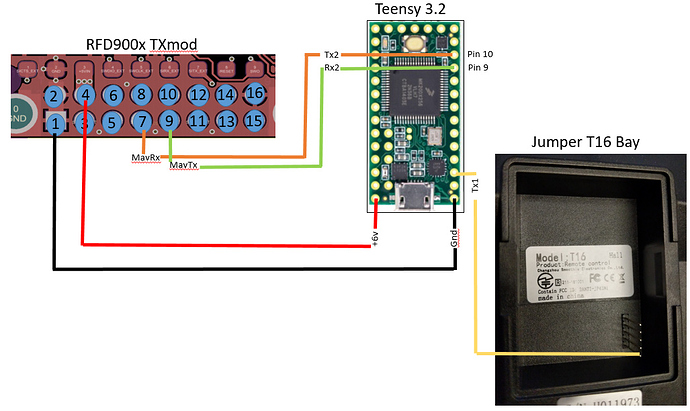 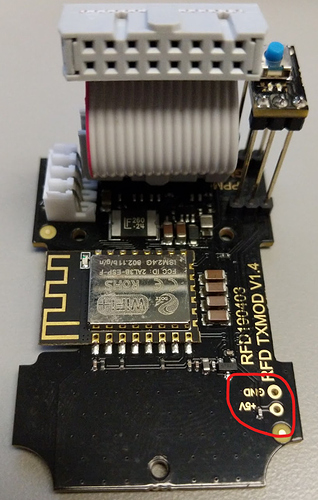 [x9d] [x7] This project is what I’ve been working on in the last couple months, an open source lua based telemetry script for the Taranis X9D, X9E and QX7 radios, it uses the frsky passthrough protocol and requires opentx 2.2 and a recent release of ardupilot. The script supports all the telemetry DIY 0x5000 packets sent by ardupilot’s frsky passthrough protocol library. The project is hosted on github Screenshots dual battery view [x9ddual] [screenshot_x7_18-03-03_20-23-42] mavlink mes…

What range out of 2.4 for the ground station i need about 20+ meters

Just got back to work on this project. Having issues with the TX module. Finished setting everything up (without the telemetry mod) and the module started buzzing then beeped and turned off and now the module won’t stay powered for more than a minute before it shuts down. Very strange. I emailed RFDesign.

Did you power the teensy of the TXmod board ?
because its not 5v its 5.250 to hi for the teensy will shut down

I haven’t wired the teensy in yet. Was just trying to get the radios working before I mess with adding the teensy. Have you found a good source to power the teensy?

the teensey 3.2 spec say it will take up to 6v on the Vin pin https://www.pjrc.com/teensy/teensy31.html#specs

Well thats odd i have 4 of them i just ran a test once the volts got over 5.1 volts they stoped