Hey guys, is there any update on this progress? I’m interested in building a similar rig setup. On mine however, I want to add a seperate lift motor at the CG which rotates for forward flight and keep the forward motor (rudder) fixed.

I have changed back to the normal firmware and set negative P for pitch. That does not produce a somersault. Yaw I still have to adjust correctly, because vectored yaw unfortunately does not work. A tilt mechanism must also be repaired.

Thanks Rolf. How did you adjust for yaw?

Anyone else try this configuration?

Next will be hovering with mounted wings.

Today we have successfully “hovered” the first tests with mounted wings. Because of the relatively strong wind for TRI-VTOLS we have not hovered higher.

Today we tried the first forwardtransition. Unfortunately, the nose rears up during tranistion.We have to find out the cause for it yet.

Also our second transition attempt failed. Walter and I suspect that the rear engines are fighting against the single front engine. After all, QHover works fine. 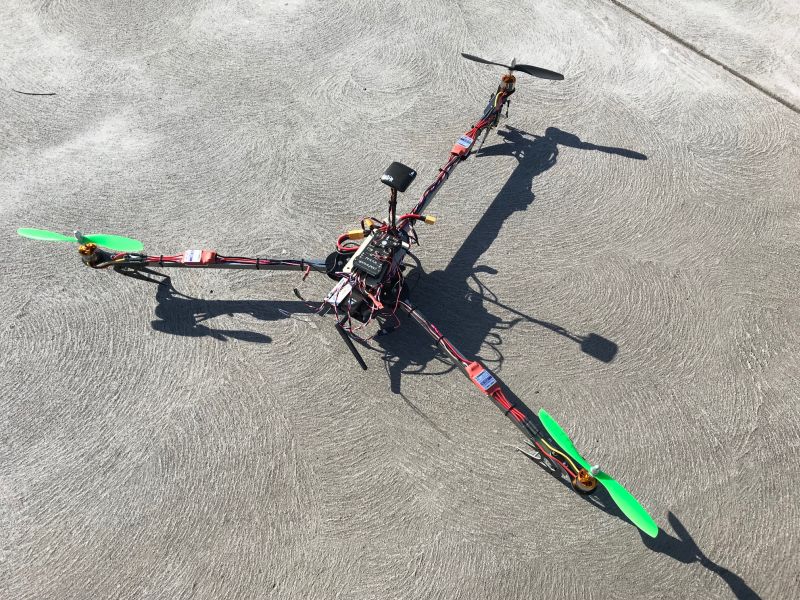 I have tried setting up a basic tricopter in reverse using the Quadplane code. I have played around with pitch values to get it flying level.

In short, takes off normally but when i place pitch input it seems to diverge further away from intended course for/aft. I even tried reversing other pitch values which didn’t help either. I have attached the last param file.

Roll seems to be fine. Yaw seems like it works but can’t stay airborne long enough to know for sure.

In short, takes off normally but when i place pitch input it seems to diverge further away from intended course for/aft. I even tried reversing other pitch values which didn’t help either. I have attached the last param file.

Your Q - Pitch values are basically like ours (only Q_A_RAT_PIT_P negative)

Did you try to reverse the rc pitch input ?

Yep tried reverse TX pitch input and made control worse off. So should all PTCH2SRV_x parameters be negative as well?

I find that as the tricopter starts to diverge (gust input or just me), the control loop is driving it toward instability and when I tried to correct, the instability is corrected slightly, however when I let go of pitch control, the PID seems to drive it back towards instability again (non level flight).

Sorry confused by this.

So should all PTCH2SRV_x parameters be negative as well?

Next is to mount a forward thrust motor that can rotate about the CG or there about. Thanks Rolf for your help.

Just tested this on a real copter, I can see no reason why it should not also work on plane maybe I built the wrong branch for you previously, this is the version I tested built for plane.

Motor 1 and 2 remain on the right and left respectively as with standard tricopter. the ‘tail’ motor 4 is now at the front

should be in the latest builds within a day

Thanks a lot Peter.
We are currently rebuilding the tilt mechanism of the rear engines. I hope we can test the new firmware in the next few days.

Hover now works correct with Q_FRAME_TYPE 6 and positive p-values - thanks a lot Peter
Next we will adjust the PID values so that it hovers without having to press forward pitch:
https://vimeo.com/364862615
I do not know where the backward trend is coming from. When hovering you have to push far forward (even in calm weather). Next, I want to set the I-part greater than zero (Q_A_RAT_PIT_I) .

Q_A_RAT_PIT_I will defiantly help, the usual rule of thumb is to set it the same as P. Not sure what was going on when you switched to Q_hover that was quite nasty.

The drift backwards actually was caused by the missing integral part. With Q_A_RAT_PIT_I set the same as P the VTOL hovered very well.
But due to heavy gusts of wind the hover-test took place (between two rain showers) in the lee of the house. Next try-out for transition will be in better weather conditions.