I am having what it seems are random RC inputs during AUTO mission, not coming from the pilot finger action. I will give you a couple of examples.

Here you can see a Channel 1 (THROTTLE) input pike of 100 PWM in the middle of an AUTO mission. Not a big deal, since throttle would not affect the mission. 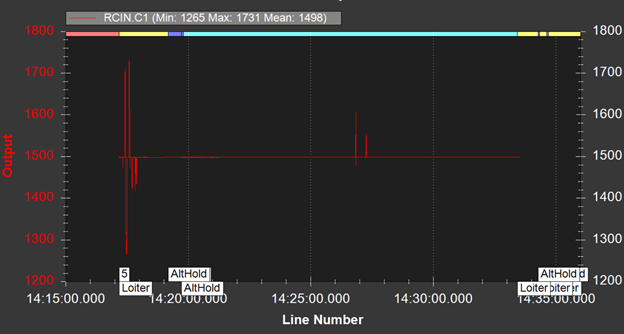 However, here you can see a Channel 2 (PITCH) input pike of more than 200 PWM, which actually translate in a sudden Pitch turn of almost 20 degrees, during the takeoff event in an Auto mission ! 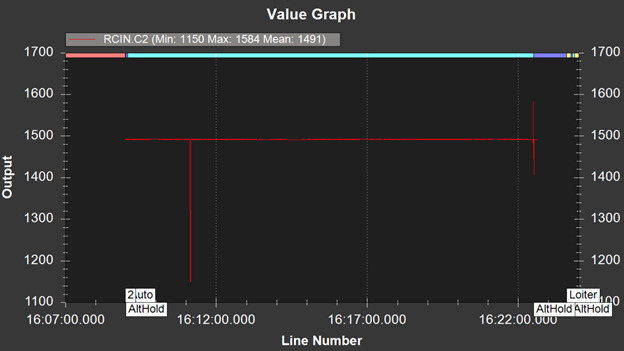 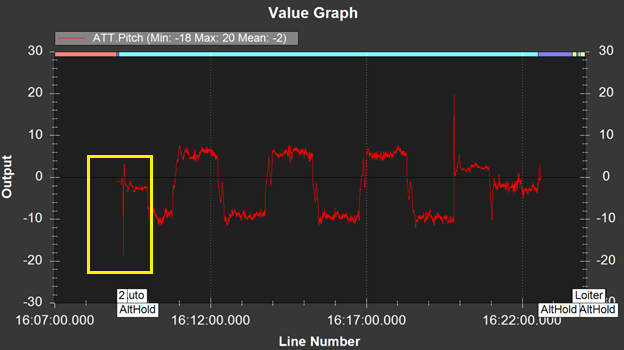 I am using a Frsky Horus X10S with a X8R via SBUS, running OpenTX. Have anybody experienced something similar? What would it be the reason and the fix?

Which FC are you using?

Sorry I forgot to mention. We are using a Blue Cube running Copter 3.6.7

It’s a Cube Black the log says but probably the same firmware for Blue… Throttle is not channel 1 it’s channel 3 and there is nothing to see there. There is what appears to be a glitch on pitch channel 2 as you say but I don’t see any corresponding pitch on the craft during this event. That’s no explanation for the glitch but are you sure you didn’t touch the stick? Because this glitch is only on one channel.

I have seen something like this also with a Frsky R9 system but the glitches were across multiple channels. The problem for me at the time was it was on chan 5 and it switched flight modes.

You are right! I did not notice that the ch2 glitch and the sudden pitch turn during take off were not happened at the same time. But… If the ch2 glitch does not explain the pitch turn (look at the yellow Square), why does it happened?

Not sure but it was commanded to do so right at a “Primary GPS changed” event so maybe related to that.

Oh I see… And what a “primary gps change” means exactly? I am using a Here 2 as GPS1 (vía CAN) and a Emlid Reach M+ with a talysmann antenna as GPS 2 (vía serial).

PS: Which program are you using to analyze logs? It does not seems as mission planner…

Yea, it switched from your CAN module to the 2nd one.

Ok, but now, has it any logic that the response to the GPS change is that sudden pitch turn, of almost 20 degrees? Why?

No, as far as I remember… But is truth that in the place in which I was flying, the number of GPS visibles for the Here was around 15… Lower than usual

BTW-Your Z vibration levels are high with clipping logged. I would address that.

Yes, it pitched 20 degrees without pilot input, apparently due to the GPS primary change… Thats is what I dont understand why…