I managed to run the python script and I am reading none zero integer output. Although the values are quite hard to correlate to the actual movement of the board.

At least i am not seeing spikes again and the signs are correct. Next I will update the apm version. any recommandation?

you need to specify the good board type:
./waf list_boards

Sorry for being such an amatuer, but where do I find the compiled .elf binary? Not locally, not under /tmp.

considering that you are already in the ardupilot directory, do
ls /build/erlebrain2/* and you should see the files

Note:
you may need to stop the old ardupcopter before
sudo top and hit ‘k’ to kill the ardupilot process (should be the defaulted number) , press enter and type 9 to kill it

and then after few seconds
: Segmentation fault …

Segmentation fault on RPI is a known problem that should have been corrected on copter 3.5 release 7 (the lates from last week). Copter-3.5.0-rc7 is now available for beta testing
Make sure that you have compiled with the latest Master
Or check if you have t->thread->set_stack_size(1024 * 1024); on line 109 in this file: /ardupilot/libraries/AP_HAL_Linux/Scheduler.cpp

I do have that line in the file, not sure why it is happening. I cloned from master yesterday so should be fine.

Should i switch to the rc7 tag and compile again?

If you have the line you are up to date.
We might have to investigate further on this issue then, I will reopen the PR.
Meanwhile just make sure that you do not have 2 concurrent version running by looking at ‘‘top’’

I purged the erle ardupilot before and no ardupilot current running on top. Ardupilot indicator light not blinking. However I didn’t kill the rosnode mavros and gcs bridge, but I don’t know it’s related.

I asked @lucasdemarchi for advice on this issue, adding more memory in the stack size seemed to have resolved the issue (confirmed by Erle as well), but there might be something else.

I would be tempted to tell you to revert to an earlier stable like 3.4 but you will loose the Lidar Lite V3, unless you want to hack the code

The only thing I would recommend is that you flash a new memory card with a clean up to date Raspian and launch the arducopter on the Ethernet port, so all the other unknowns will be removed

Thanks for the advice! Don’t really want to lose the lidar lite. I will do a clean build and test the current master branch.

Cool,
I think your new build is fine ,so you can just copy the file on the new card and launch

you can check the version of the release with: grep --text APM:Copter arducopter

I have another brain 3 at hand so I copied the new build and ran arducopter.

After connecting to APM planner 2.0.25rc I found out:

— I can’t see any parameter in the full parameter list
— LidarLItev3 works
— optical flow measurement doesn’t appear
— When trying to enable optical flow from the checkbox, it turns off the next time I open apmplanner again.
the I2C can be detected via i2cdetect. (I have now both lidar lite v3 and px4flow on different I2C port)

Interestingly enough… I can’t choose the frame type either. I feel like I am missing some parameter file?

Yes you have to specify a frame class now http://ardupilot.org/copter/docs/frame-type-configuration.html

Are you sure that you flashed the firmware on the Px4Flow ?
http://ardupilot.org/copter/docs/common-px4flow-overview.html#upgrade-the-px4flow-sensor-s-firmware 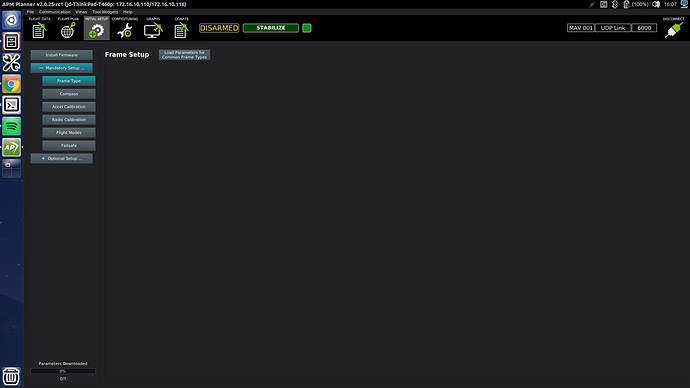 This is what I am getting with the frame setup page.

I suggest you go through the steps using Mission Planner
@JD-ETH do you confirm that arducopter is stable (no Seg Fault) on your new system ?

Yes it looks like its running fine. Just can’t test the vehicle with apm planner, and don’t have a window laptop here. The px4flow still doesn’t seems to work though.

The parameter list issue comes from using router. after switch back to hotspot it works. The opt_flow outputs contant none zero value at flow_comp_m_x and flow_comp_m_y, and the rest is zero. The ground_distance is taken from the lidar lite now. I am seeing hope

However I didn’t kill the rosnode mavros and gcs bridge, but I don’t know it’s related.

I think it wasn’t the problem. I was able to run the arducopter 3.6-dev now, however optical flow still not functioning correctly.btw, do you know where I can find the launch file of the gcs bridge in erle? I need to setup gcs id for override purposes