Hello,
I am using Pixhawk 2 as flight controller, Lidar Lite v3 for distance measurement.
I want to use PX4Flow for getting the velocity of the quadcopter.
I am taking the Lidar data through pwm and connecting PX4Flow on the i2c pin. The Lidar is working properly. On following the instructions given on the website, I am unable to get data on Mission Planner.

Please help. I am struck on the problems since quite a lot of time.

Are you using the I2C connector of the GPS ?
Look at this: Pixhawk 2.1 with maxbotic I2CXL-maxsonar-EZ issues

I mean are you using the connecteor marked GPS to feed the I2C ?
This one seems to work better because its the default PixHawk I2C port.

Which port are you talking about in the PH2?

Also, the connector in the PX4Flow should be in the 4 pin I2C port, right?

The pinout of the first GPS is like this: 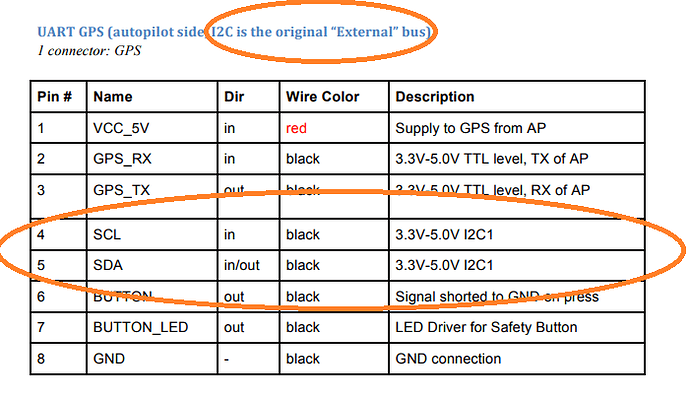 So, you are suggesting to solder to be able to connect to the GPS I2C, right? … Is there other alternative? Shouldn’t it work with the I2C port on Pixhawk?

I dont have a Pixhawk 2 to test px4flow on it, but from other I2C related issues, I would certainly try it on I2C1.

I just found the required connector, I think. In the given connector for GPS for PH2, there are only 3 wires for the I2C.
When connected, the PX4Flow isn’t powering.

You obviously need to feed power = 5volts from pin1
For test, powering the Px4Flow from USB should work as well

Yeah… Why haven’t they provided the connector like that?

Yes… the OFS is working when connected directly with USB

hi you guys, 4 years later from you, I was having the same problem and you have help me to solve this problem.
The I2C from the GPS did the trick! Thanks!

i was wonder if you make the px4flow work, and if you have, did you have this “bouncing” problem.

Hi I made it work without GPS, works better, but still having the “bouncing” break. The drone stays very good, then Im going forward, and when I release the pitch, the drone stop and come back at least 1 meter. The same happened with the roll here...

Here are a video and telemetry file. I have use the px4flow and hereflow, on both it happend the same, but in the px4 is not so hard.

Hey,
I remember that we also got a similar performance. However, it wasn’t an issue for us.

Hello,
I had the same problem, and I switched to the GPS1 port and that solved it.
However, although the PX4Flow data is coming to the Flight Controller, the data from the MB1043 RangeFinder connected to the PX4Flow is not.
Any idea what it might be?

Hi, 4 months later from you haha.
Do you guys mean I can’t directly use the i2c2 pin on I2C port but I should use i2c1 pin on GPS port?
My FC is pixhawk4 mini.
I appreciate for your reply. 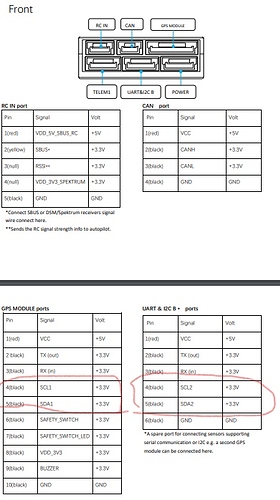 I face a very similar situation: