Im using a Turnigy 9X with stock firmware and PPM mode between the receiver and APM 3.1.
When I change the range in the mixes for the switches nothing changes when I look at the flight mode screen, but when I go to the radio calibration screen the gear switch changes channel 5 and the mode switch changes on channel 6. Anyone know whats going on, it seams like the mixes arnt working. But when Im in the flight mode screen the gear switch does change flight modes.

Did you tell the radio to output 6 channels? Does the receiver accept more than 4?

How, what do you mean its 8 channels PPM mode?

It is supporting all my channels, because I can see them work when I look at the radio calib screen, they are all there and change.
Thanks for your reply!

There is a parameter in the radio that sets the number of channels transmitted to the receiver. You need to hook up a servo on the receiver side and make sure it comes out there as well.

Thanks, but I don’t get it, I can see all my channels working in MP so they are working.

Only channel 5 can control the flight mode. Channel 6 is just passed through.

On my Turnigy 9XR I mixed two switches together to output the 6 PWM values I needed on channel 5.

I get that but why are mine not being mixed through?

On mine I use the two switches in the upper right corner of the radio Aux3.

This is what helped me set my flight modes: 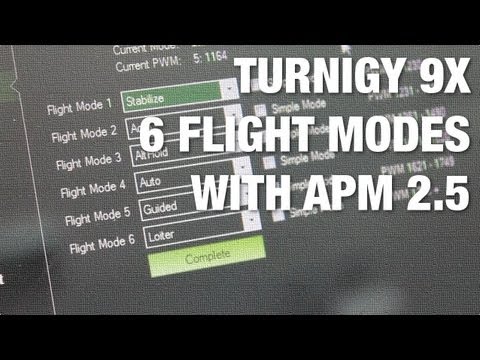 Yes, I’ve watched his videos, but it isn’t working I use ppm mode to connect and wonder if it makes it different? When I adjust the settings for PWM up and down nothing happens on the flight mode screen, but can see changes on the radio cal. screen on channel six.

Hi, people are trying to help but in order for this to work you need to provide some information otherwise you’ll just get, watch xyz or try xyz. Please help us to help you. Please send through a screen shot of both the mixer screen and the custom switches screen. Since you say it’s configured as per the video this will help alot. It would also be good if you could show one of the mixer screens with the replace value set as well (so 3 screenshots).

I set the mix’s just like in the video, which is the same as many other sites, but it won’t work. Seams to me it must have something to do with mapping that is done with PPM mode, like I said if I look at my radio calib. screen the gear switch changes on channel five and the mode switch changes on channel 6, shouldn’t it mix channel 6 an Aux channel with channel 5 also an Aux channel? Thanks guys!

We need to know what receiver your using and how the PPM is connected. If it doesn’t move on the Mission Planner Radio calibration screen it’s not getting to the flight controller.

Im using FrSky D8R-ii Plus and PPM is connected to pin 1(ch 1), ch 3 and 4 has a jumper on it. I allready described how it works in Mission Planner so its getting there, just isn’t getting mixed.
Thanks,
Dave

However you said that when you flick the 2nd switch it shows a change on the TX. This could mean its not configured as per the video (it is possible to have the switch mixed with CH5 and also still output to CH6 - although not much use)… Since you wont post the screenshots as asked, we can only help so much. You know the saying, a picture says a 1000 words.

Can you confirm when you flick through each mode on your transmitter, does each one of those move the CH5 on your TX? If CH5 only moves to three values on the tx then it’s a config issue. If however you can confirm that there are 6 distinct values generated for the 6 positions then that would be helpful.

Are you sure that all bar the first one is set to replace for it’s type. I highly doubt that it’s the RX. The TX will generate a PPM siginal and pass it to the TX radio module. If you have it configured correctly then the PPM signal to the Tx radio module will only see the mixed value.

The screenshots would let a 2nd set of eyes (or many more) confirm you’ve got it configured correctly. We’ve all been there before.

They dont affect ch5 thats the whole problem, the gear switch does with two levels and the mode switch affects ch6 with three levels.

I never said I wouldn’t post screenshots although you cant take a screenshot on a tx, it would be a photo. Ive been working overtime and havent had the time, but have two days off. Im going to play with it today now that I have a better understanding of how things should work. If I cant I will post some photos later although can’t see the point because its the same as watching the video, I could take screen shots of that and it would be the same thing.

The sentence " Are you sure that all bar the first one is set to replace for it’s type. " makes no sense to me are you referring to Aux Ch’s?

I will post an update later after I have some time playing with it more, but I really appreciate the help!
Thanks,
Dave