Problem code apply during the development process of the coaxial copter 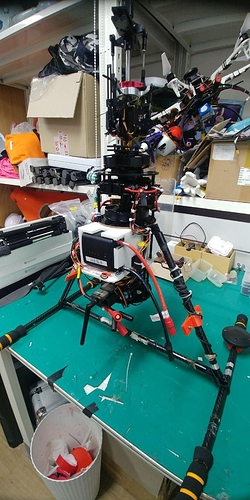 I am currently developing a coaxial copter.

I will not use the collective.
And I set the current Frame_Type to 9. (Coaxcopter)
And after a few tests, there is a warbling phenomenon and attitude is easily released.

I wonder if the existing Adupilot coaxial code is applied without any problems in operation.

I think the general rule of thumb is if it has a swash plate then it belongs on the heli code. You may be able to put the second rotor as the tail rotor, in this case it looks as though it performs the same function. It should then adjust it to balance the torque of the upper rotor.

Or you may need a special case in the code. It will take some very careful testing. I would think you could set up such a configuration in SITL using realflight.

Same as your opinion, I think I am going to modify only the lower motor part of the code of a normal helicopter.
(By changing the tail rotor code)

However, I do not need to use a collective, so I am trying to use the already implemented coaxcopter code.