The fundamental problem is that a failure is clearly noticed on the video, but the first error apearing in the log (GPS glith) happens 5 seconds later. I don’t see the origin of the failure in the log.

The sequence of events which can be observed in the video are:
-Drone armed; mode Stabilize.
-24": mode changed to Auto (mission starts; yaw changed, pointing to ROI).
-33": failure. The drone descends normally towards a land waypoint, but being one meter above ground there is some kind of failure, height oscillates, the drone is accelerated heavily, and goes away without control, being stopped by a fence.
-41": the drone hits the fence. The GPS is disconnected (GPS logs stop, but not others); it was found 10m away.

This is a graphic of ATT DesPitch and Pitch:

This is a graphic with other events:

The GPS is an RTK one. GPS.Status is 5 (RTK Float) at the crash. It goes to 4 during some instants, starting at:
72757 12:09:39.401 105913163
so that happens 3.4" after the failure is noticed in the video, coincident with the RFND.Dist1 glitch mentioned before, so can be explained because the antenna didn’t point up during some instants, and can’t be the cause of the failure.

Questions:
-What can be the primary cause of the failure observed at second 33 in the video?
-Why does not the drone land and stays out of control?
-How can it be that RCOUT.C3 after the failure can have high values and cause a crash?
-What can be done to prevent such a failure?
-Am I missing something

The video on the on board camera is:

Something wrong with the build, your CW motors are always working harder.

You did not start with a full battery, and the voltage drops a lot while it is trying to fly after the initial damage.

The vibrations were never really good, but got way too high after the initial crash and the properllers probably got damaged.

You ask Something wrong with the build, your CW motors are always working harder.

You did not start with a full battery, and the voltage drops a lot while it is trying to fly after the initial damage.

The vibrations were never really good, but got way too high after the initial crash and the properllers probably got damaged.

Answers:
-most likely something did fell apart
-why should it land ? - you were flying a test in AUTO and poshold , not manual throttle modes.
-RCOUT dependd on attitude, it is working as expected given the setup/situation
-do not fly tests in autothrottle modes, stick to stabilize until you know all parts are well mounted.
-…

Thanks for your patience analyzing the logs. I am more used to use Mission Planner, but I´ll have a look at your way.

“CW motors are always working harder”
Observe in video above that mission include a ROI, so drone is rotated (in full video CW an CCW).

“You did not start with a full battery, and the voltage drops a lot while it is trying to fly after the initial damage”
This is the battery voltage:

Copter_20181101_14_BatCurr.png1366×486 14.4 KB
After the failure observed in second 33 of the video the drone is fully accelerated, the current is measured up to 70A so the voltage drops (out of battery terminals goes down to 12.5V), but all that is a consequence of an unknown previous failure.

“The vibrations were never really good, but got way too high after the initial crash and the properllers probably got damaged”
These are the vibrations:

Copter_20181101_14_VIBExyz.png1366×486 16.4 KB
Of course, if there is a failure (observed in second 33 of the video), the drone is fully accelerated, hits ground, a tree and a fence, there are going to be vibrations and the propellers will break, but all that happens after the failure.

“why should it land?”
When the drone hits the fence (8" after the failure is observed in second 33 of the video) the GPS is thrown away, there is a GPS glitch and a land command that is not obeyed.

“do not fly tests in autothrottle modes, stick to stabilize until you know all parts are well mounted”
As said, this drone flew smoothly and reliably (many missions) during months, and four days before with gimbal and camera and V3.6.0-rc12. Changing to V3.6.0 final was the only big change.

“most likely something did fell apart”
That is not clear in the videos. As seen in second 33 of the external video, after a normal descend, RCOUT’s oscillate, the drone flies away and, worse, is fully accelerated.
This is the detail of RCOUT’s oscillation:

If the CW motor are working hard , means ccw motors aren’t straight up, causing a yaw, which is countered by cw motors to keep heading.
Fly in a hower for some minutes and graph RCOUT s ,you can see cw & ccw motors will be grouped into 2.check the motor mounts of the low pwm motors.

Again: there is a ROI.

The failure appears clearly when all RCOUT’s oscillate, as seen in the detail image above.

I think the underlying issue is perhaps ground effect pulling the barometer altitude off. This led to the altitude estimate not being correct so the vehicle flew too low and hit the ground.

Form the pic below we can see the barometer altitude drops by about 3 meters. 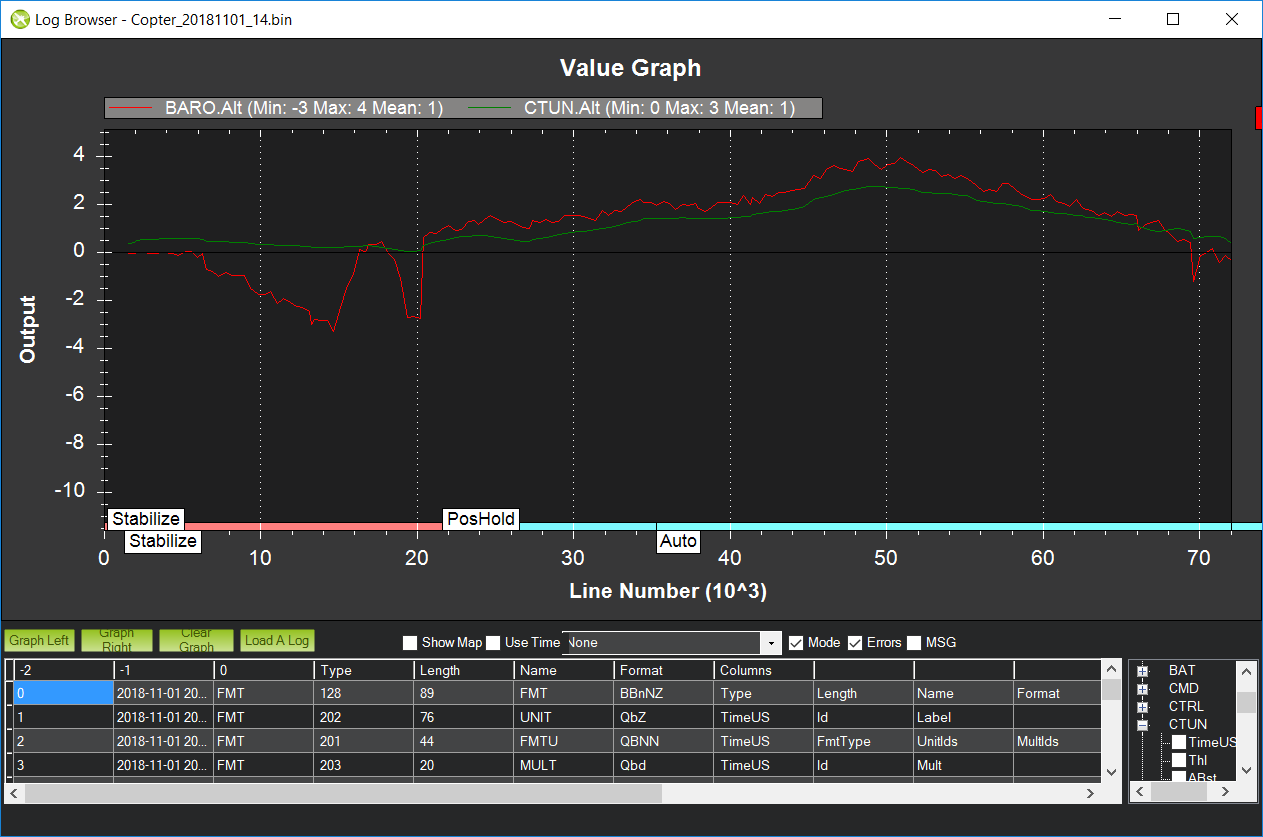 I think enabling the ground effect compensation will help (this feature will be enabled by default in Copter-3.7). If the problem persists if very low altitude flying is required, it could be a good idea to attach a lidar and then enable terrain following which pretty simply involves setting the Altitude Type drop-down on the Flight plan page from “Relative” to “Terrain”.

Thanks for the indication about GND_EFFECT_COMP. I didn’t know about it and will have it enabled in the future.

That said:
-The barometer altitude going to -3m happens around log lines 14000 and 20000. The RCOUT’s oscillations (first indication of failure) happen around line 63000. Line rate is roughly 3000 lines/second.
-For low altitudes there is Benewake TFmini sonar. These are BARO.Alt and RFND.Dist1:

Copter_20181101_14_BAROAlt-RFNDDist1_wide.png2065×415 10.8 KB
The TFmini gave good indications all the time, even it is seen pointing far away.
-Altitude related parameters:
EK2_ALT_SOURCE=0 (barometer)
EK2_RNG_USE_HGT=70 (EK2_RNG_USE_HGT: range finder switch height percentage)
RNGFND_MAX_CM=700, so under 490cm the TFmini should be the primary height source, and it shows reasonable values all the time.

So still I don’t see the reason for the crash, and less for why the drone is fully accelerated (RCOUT’s around 1900 during several seconds until crashing).

“…the vehicle flew too low and hit the ground”
It was much worse: after hitting the ground it was fully accelerated and crashed (see video).

About protection for failures, this happened recently on another drone with V3.6.2-rc2 and also a TFmini:

Copter_20181119_30_BAROAlt-RFNDDist1_ModeNum.png1366×339 10.3 KB
Initially MODE=16 (PosHold), later MODE=3 (Auto) and later MODE=6 (RTL). I then see that it is climbing without control towards the selenites and switch to MODE=16 (PosHold) for landing. I then observe that I had forgotten to connect the TFmini cable (RFND.Dist1 is 0, with no serial data) and this was not indicated at all. RTL_ALT=0, so it should return at current altitude. So an obvious error without any indication led to a dangerous situation.
rmackay9 (rmackay9) November 21, 2018, 12:33pm #8

Yes, ground effect and it’s influence on the barometer is a real problem especially for frames with short legs.

Once the vehicle hits the ground and tumbles it will try very hard to right itself. That could include increasing some or all motors to full power.

I’ve seen so many user incorrectly setting either EK2_ALT_SOURCE and/or EK2_USE_RNG_HGT when attempting terrain following that I’ve spent some time today fixing up the terrain following wiki pages (manual modes, autonomous modes) including adding a warning to not set these two parameters.

Re the last issue with the vehicle “climbing without control”, I’ll need to see a log…

“Once the vehicle hits the ground and tumbles it will try very hard to right itself. That could include increasing some or all motors to full power”
That sounds correct, so this could be the sequence of events:
-Ground effect alters descend (video second 33).
-Vehicle tumbles.
-Vehicle tries to right itself and applies full power.
However in the vicinity of RCOUT’s oscillation (start at log line 66000 moreless) the barometer signal BARO.Alt seems good. It seemed altered around lines 14000 and 20000, several seconds before.
But being so low applying full power during several seconds is an incorrect decision. Perhaps it would be better to apply to one or other motor during short intervals (such as 1") and see if it is upright.

“…incorrectly setting either EK2_ALT_SOURCE and/or EK2_USE_RNG_HGT when attempting terrain following…”
Parameters:
TERRAIN_ENABLE 0
TERRAIN_FOLLOW 0
(Two .DAT files in µSD TERRAIN directory)
EK2_ALT_SOURCE 0 (barometer)
EK2_RNG_USE_HGT 70 (questionable)
About EK2_RNG_USE_HGT, from http://ardupilot.org/copter/docs/parameters.html#ek2-rng-use-hgt-range-finder-switch-height-percentage
“Set to -1 when EK2_ALT_SOURCE is not set to range finder. This is not for terrain following.”
What is wrong?
Being TFmini data correct, how can I assure it will be used near ground?

“…vehicle ‘climbing without control’, I’ll need to see a log…”
It is the same small drone as the above GND_EFFECT_COMP tests.
Copter_20181119_30.bin
RFND.Dist1=0 all the time, but there is no TFmini serial data since its cable was not connected. Seems to think that it is really at altitude=0 and has to climb, instead of seing the obvious error (no serial data).