Hi, I’m new to ardupilot’s and mission planner.
I have read few trends and none of them help.

I have downloaded the mission planner and there isn’t any ‘COM’ on the top right hand side, instead there’s only AUTO,UDP …

It will only appear once you’ve plugged a USB lead into the flight controller,and into the PC, and allowed it to boot up,Then the COM port will appear.You do not want to connect until the firmware is loaded.In your case you will need to pick a previous firmware from the bottom right dropdown on the firmware page of Mission planner.

There is a lot to learn so take your time.

Ignore that this says Pixhawk.The APM has been retired from devepment and so is considered as legacy hardware within Mission Planner.You can only use up to and including AC3.2.1 firmware (AR 2.5/AP 3.3 /AC 3.2.1).

pick a previous firmware from the bottom right dropdown on the firmware page of Mission planner.

This is a complete mystery to me. I see no dropdown at bottom right (or anywhere else). The program just automatically downloads the latest firmware and there does not seem to be any options or choices.

It’s a steep learning curve.There is a lot to learn.It’s written down here.

Look in here.It’s under Pick previous firmwares. If this is not visible move along to Config/tuning tab and look for Advanced in the Planner/layout drop down. 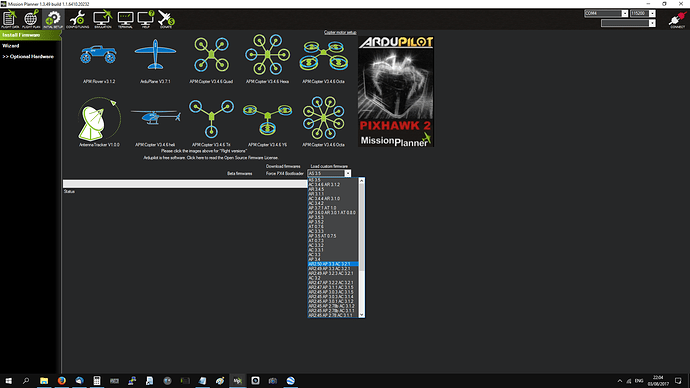 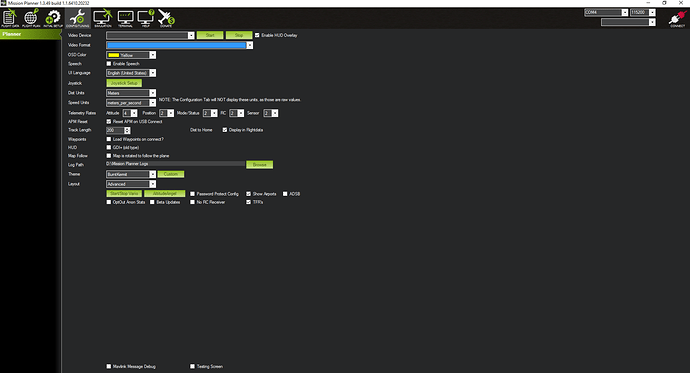 It will take some time to get along with the new operating system.Just be patient and read lots on the wiki.

Thanks for the quick response. I will work on it