Hi there,
I’ve been flying an XL Quadrocopter with about 8kg weight and a 15.000 € camera for a year now. There are also 2 parachutes on board. So far, everything has worked great.
Then a few days ago I updated the firmware from 3.5.7 to the latest version 3.6.6 and I have also flown twice. Unfortunately, the Pixhawk simply triggered the parachute (at 30m) on the third flight for no apparent reason? (At least I do not see one) The parachute was not triggered manually (PWM channel or Mavlink).
There were no abnormalities in the flight and the Copter flew well.

I was lucky that the parachutes just have opend before the ground, otherwise it would have become very expensive. This must not happen again.

Except for the new firmware version I have not changed anything…

It would be nice if someone could help me and have a look at the log file to determine why the parachute was triggered. Maybe its a bug?! 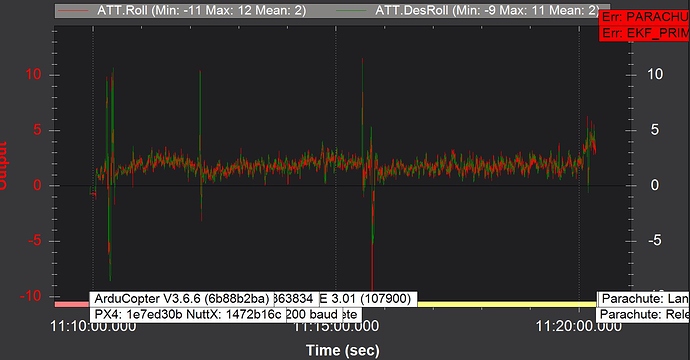 If I was carrying a E15,000 camera and had working firmware validated over a year, I probably would never upgrade my firmware unless there was a critical feature I needed!!

Anyhow - hope you figure out your issue.

I would like to have the improved Loiter mode, that was the main reason for updating.

So the parachute_release function is assigned to CH8 and there is no activity on that channel logged.
Also there are strange spikes on CH4 & CH2 - @Fabian are those expected? What is your RC device?

This issue could be related https://github.com/ArduPilot/ardupilot/issues/10543

Thanks @sergbokh for your reply!

You are right, parachute_release is assigned to CH8. In case the remote control has triggered the parachute incorrectly - would you even see that in the log? Recording stops immediately after the parachute release. I do not know if the Pixhawk waits long enough for that high signal to record.
But I definitely did not trigger it manually.

Could be a ppm issue I moved to SRXL using the AR7700.