Pixracer does not work with TFMini i2c lidar (ChibiOs)

Last two weeks I’m trying to get the I2C version on the TFMini lidar to work with Pixracer.
There is no driver for I2C version at the moment so I created my own.
At the beginning there was a number of issues because of mistakes in my driver implementation but now I’ve stuck with some low-level problem.

What I already checked:

So I wonder why compass works good on the same bus but lidar isn’t?
The only thing I’ve noticed so far - TFMini does use a CLOCK STRETCHING when ACK-ing the first byte.
Whilst the compass never does CLOCK STRETCHING.
Thought I don’t know if this is a reason or just a coincidence. Is there known issues with clock stretching?

Returning to the fact it works on 25KHz - I’ve missed the analyzer dump but in that case the lidar does not produce a clock stretching on first ACK. Looks like it is because there is enough time for lidar to response at that frequency.

Another thing that confuses me is the timing between the SDA goes low and SCL goes high (T-SU-DAT if I remember correct):

изображение.png1379×321 56.5 KB
May be it is too short for Master to recognize properly? As per I2C specs the min time for 100KHz is 250ns. There is about 1 microsecond. This is good but still very close to the limit.

Looking at STM32F4xx errata sheet, there are also interesting things exists. It is hard to understand if they’re handled in the core Chibios drivers or not:

I’m out of ideas what else can I try.

@tridge because you’re the comm interfaces master in ArduPilot

Hi guys, any advice, suggestion?
Will it makes sense to check lines with oscilloscope? I have no scope so I will need to find one for rent, if that could help somehow.

In your last 2 images: what I see is the sensor holding the SCL line low for clock stretching and then its ack. That part seems correct. What I don’t see is the stop condition: sda going up when scl is already up. After the ack the slave is releasing the sda line, master is forcing it down, but then it releases SDA and SCL together. That doesn’t seem right.

If the sensor doesn’t handle repeated starts, then it should explain why it’s not working.

master is forcing it down, but then it releases SDA and SCL together. That doesn’t seem right.

Yes that’s the point, it looks like the master aborts the whole transaction for some unclear reason.
As I wrote, the only thing I suppose is something wrong with clock stretching support by master.

If the sensor doesn’t handle repeated starts, then it should explain why it’s not working.

Sensor requires the repeated start here, this checked with Arduino many times.

Tfmini plus is working fine for me with another board, Emlid Edge, using the same driver. I will capture a trace later today or tomorrow there to check the difference.

See below a working session with TFMini Plus (paired with Emlid Edge as FC). Top is SDA, bottom is SCL.

Stop condition is there.

And do you have screens from STM to compare?

This is with CUAV v5, thus a stm32f7. See that when we are going to read it’s considered a repeated start (Sr) rather than a Start because there wasn’t a stop condition (at least not one grabbed by the resolution of my logic analyzer - I traced at 2MHz). 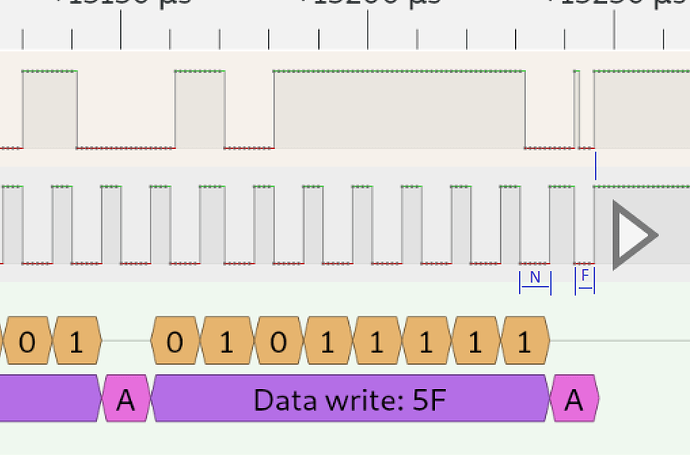 My tfmini plus arrived to the local post office, so I will have a chance to test it with pixracer stm32f4 in a few days

@lucasdemarchi
Just connected a tfmini plus and have the same issue:

@sergey can you connect another sensor like a compass and check we have a stop condition in the trace?

@lucasdemarchi you’re right, tracing compass, there are no stops most of the times (but compass still works OK)

but there we have the stop condition

Only selected have the stop condition, rest haven’t:

Yeah. There’s something wrong with the I2C driver in Chibios I suspect. I was able to force generating the stop condition by using the autoend flag on stm32, but then I’m not getting the interrupt when the transfer ends. I need to find some time to take a look on it again.

Thanks for testing this out.

Later today I will trace compass on Nuttx 3.6 and Chibios 3.6 to see if that a ChibiOS-only issue

Please check mail address, it seems you use incorrect one.

Checked on 3.6.8 NuttX Copter and can confirm every I2C transaction has a trailing stop condition

Please check mail address, it seems you use incorrect one.

what do you mean?

Checked on 3.6.8 NuttX Copter and can confirm every I2C transaction has a trailing stop condition

@sergbokh thanks a lot for confirming that. This should narrow my bug hunting.

I mean that that this mail seems to be sent to me by mistake, I do not now what is it about.

Plz tell me if I can somehow help diagnosing the issue.
Isn’t it worth to create a ticket to draw some attention to the problem? As it seems the most FC on F4 and F7 MCU are affected.