Hello everyone, greetings!
I have an FX-79 airframe with Pixhawk (firmware 3.7.1) and GCS with Mission Planner 1.3.49.
I tried twice to make a planned flight in auto Mode and both failed (logs and video of the second flight in the link below).
Apparently, when the RC signal is lost the acceleration decreases and nose is up, leading to the stall.
I investigated the logs, but I could not identify the reason why Pixhawk had this behavior.
Relevant information:

Where is RC signal loss? RC3 IN is good the entire flight. 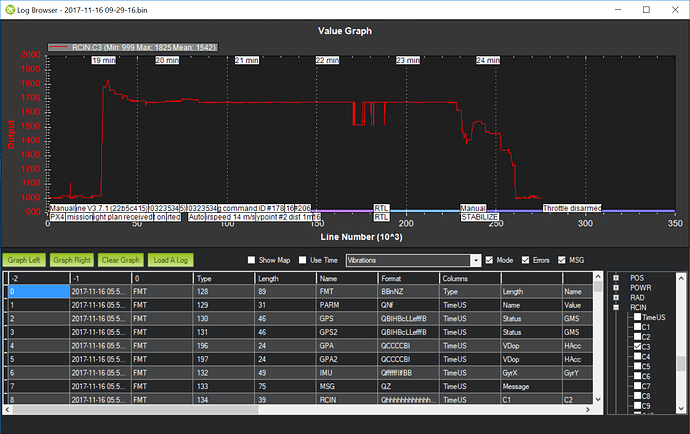 Hi bchristal. Thanks for reply.
When RCIN.C3 decrease means that RC signal is lost. I configured RC failsafe to 1514 pwm.
In the range shown in the figure, when the orange line oscillates the RC signal is lost.
You can see that the RCOUT.C3 decrease (blue line) and Pitch increase (red and green lines) after this.
This is the point. The mistery. 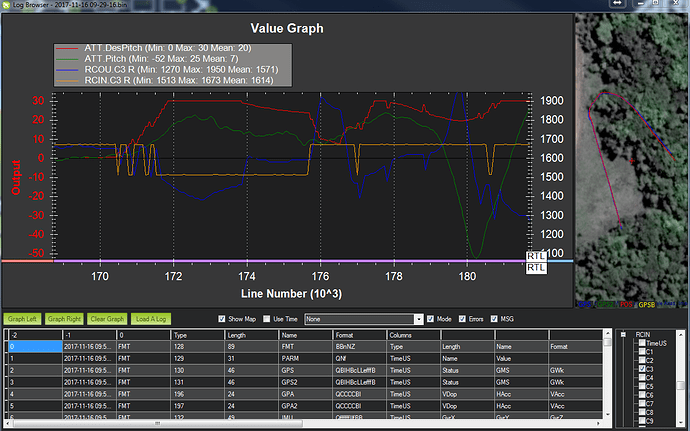 A couple observations and a suggestion: using a non-standard failsafe value is not advised and can lead to unexplained behaviour. The RC failsafe is supposed to go to below 950 pwm when signal is lost, it’s not supposed to, and the software is not designed to use to 1514pwm i.e. around the mid point. Normal range is 1000 to 2000 so below 950 indicates something is wrong and AP uses that value to trigger the failsafe condition. Basically anytime the pwm is below 1514 your system is in condition failsafe potentially leading to all kinds of unexpected behaviour.
For example: is throttle nudge enabled? If it is and you lower the throttle from high to just above or below your failsafe value then the system will use less throttle.

Also if you go from manual to auto, AP can use different values like THR_MAX and TRIM_THROTTLE.

So I would set the pwm failsafe value to the correct value and try again.

Hi, Graham_Dyer. Thanks for support.
Throttle Failsafe in Mission Planner was disabled. Only GCS Failsafe has been enabled.
However, on that flight (which was my second attempt) I configured the RC Failsafe (i6) to maintain the acceleration by 50% in case of loss of radio signal (trying to solve the problem).
But the inexplicable behavior was the same as the first flight, in which we had the following configuration:

YES, the throttle nudge is enabled. Is this then a cause of the problem??? 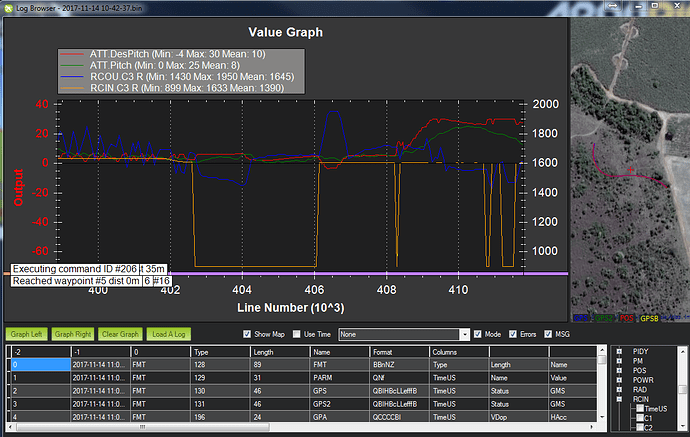 Interesting, I see that RCOU.C3 dropped at first during the first period of low RCIN.C3 then recovered about half way through, that seems to suggest that it may not necessarily as a exclusive result of the low RCIN.

However I would definitely try with throttle nudge disabled and see if you can still detect the problem.

When I fly in Auto I put my throttle on the Tx at 50% and leave it there but I have no throttle nudge and when I get a failsafe there is no change in aircraft behaviour. I have flown 400hr professionally and regularily flew BVLOS out to 30km, I always turned the Tx off just after launch though, and never saw that. However my THR failsafe was always enabled and set to “continue in auto” else RTL. I wonder if, as that is disabled you’re getting some weird effect. But first to test with throttle nudge off to see if it’s that.

Just to confirm if you have changed the “fly mode” on these points.
It’s what I told you yesterday. When you lose RC is not just about channel 3. If the RC failsafe is not enabled, it will change your “fly modes”.

I’ve already done successful flights with RC signal break (even with the same configuration, but with a lighter wing).
And I could see a quick downward oscillation of RCOU.C3 at the time of signal failure (figure: peaks on the green line).
I think this can be seen in your logs as well.
I hope my problem is only with THROTTLE_NUDGE.
Congratulation for your BVLOS.

Yes, all changes in flight modes were intentional. Including the RTL, accepted by the radio with oscillating signal, that saved the aircraft.

3 – Calibrate your radio on Mission Planner
4 – Test your setup

Basic test:
1 – Remove propeller
2 – Turn on your radio and your plane
3 – Put the radio on stabilize mode
4 – Turn off your radio and check on mission planner if it enters in failsafe mode

Field test
1 – Setup a simple mission.
2 – Start your mission
3 – Turn off radio
4 – Check your GCS to see if it enters in failsafe mode. 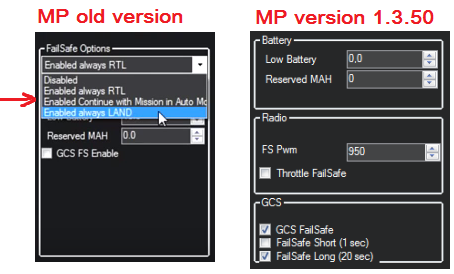 Hello everyone.
Two parameters were changed and new flight tests were successfully performed.
New values:
STICK_MIXING = 0
THROTTLE_NUDGE = 0
By disabling them the radio signal was totally ignored in the AUTO mode, allowing the flight to be performed only with the GCS.
Have good flights.