I’m in a hurry to get a Pixhawk and all of the online stores local to me are out of stock. HK has a clone but I’m not a big fan of clones as I’m a design/engineer and it would piss me off if someone copied my products.
What everyones thoughts on the HK clones, good/bad.
I could bit the bullet and purchase from 3DR and pay the same price as the pixhawk for the shipping?
Cheers,
RS

You do realize that Pixhawk is actually an open source project, from the hardware right to the software. If you’re worried that much about it, getfpv.com has good clones marketed as Holybro that work every bit as good as 3DR.

Thanks Big Tulsa, I didn’t know the hardware was also open source, in that case I’ll get the HK and get a 3DR version when they come back in stock, I always need spares as I crash a lot.
Cheers,
RS

Biggest issue, is “as usual” you get what you pay, so sometimes the so-called clones have quality problems that aren’t that usual on the best manufacturers.

Also, please take in consideration that besides being an open-source project some of the more reputed manufacturers contribute to the development of the project.

I have 4 Pixhawks and none of them are from 3DR so that makes them from an alternative make not a copy or clone.

2 from Banggood and 2 from 2 different eBay sellers

3 of them have the 1MB memory limit like the 3DR version and one does not.

3 Work faultlessly one one does not

The one that does not, works fine as a Plane Controller but not as a Multi-copter controller, but that is down to being damaged by a failing ESC, and not manufacturing fault.

3DR appear to have stopped selling them or are stopping selling them, so the alternative makers are to soon be the only way to go.

The 3DR version cost about £200 in the UK, The eBay versions can be had for as low as £45, and that for one without the 1MB memory issue.

Thanks guy’s I was totally unaware of the realities of the market.
I paid £84 from HK and Unmanned Tech usually sells them for £155 (from 3DR).
I will still buy a 3DR Pixhawk as soon as they come back into stock, open them up and have a look at the quality, soldering, PCB thickness etc to compare.
I just feel better making sure my money goes to the guy(s) that deserve it and as it is open source I guess I can feel ok about the HK purchase.
The cheaper version has a place in my ability scope. Up until now I have been an ArduBoat user for the last couple of years (I don’t get too much time to play due to work). And I have hit almost every boat in the marina. I once hit my own boat, the one I was standing on, so hard I had to jump in the water to remove my model boat from under the hull of my big boat.
But now I want to start flying (god save us all) and if my flying is anything like my boat driving I have a feeling I’m gonna need quite a few Pixhawks

Last I’ve seen, HK doesn’t contribute to the ArduPilot project, in any way, shape or form.

If you want to contribute to the ArduPilot Project, make a donation and then purchase the best flight controller you can get from China. We have analyzed dozens of flight controllers from a variety of factories, and found the 3dr Pixhawk to be among the lower quality. We have not analyzed the HK product, because HK is a vendor, not a manufacturer, and quality can vary dramatically as they shift from one supplier to another.

Just as I was about to order the HKPilot32 (£84) (very rectangle case with no brand on it) I noticed a Px4Pilot (£45) (with a case identical to the PixHawk offered at 3DR), so I order two of those.

Here are the spec’s 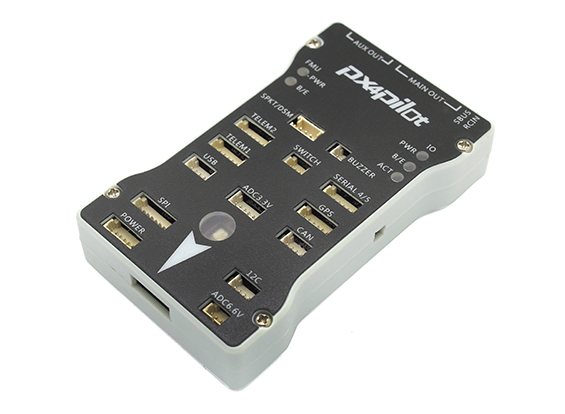 One thing I did notice is that this Pix4Pilot does not say:

As I have no idea what NuttX RTOS is and I have never used the Pixhawk type autopilots I’m not sure what this means. It may have it and not be listed or it has been superseded by another software.

I do know this, I am looking fwd to the Pix4 arriving and having a play, points of interest are having 2 GPS and the EKF. Also running the Ardurover 3.x and using the loiter.

Take a look to Pixracer, they support developers and look’s really good, http://www.auav.co/product-p/xr-v1.htm

There is a Pixhawk 2.4.8 w/ 2Mbyte flash on chinese sites. Seems to work with the same issues as most other original and clones (i.e. no power drain from IMU2 on power cycle, might cause IMU2 to brownout and hang when power cycling/replacing batteries, EKF is not happy then. So keep it powered when changing batteries, either by 2 parallel batteries or a big capacitor or wait 30 minutes, or disable 2nd non-temperaturecompensated IMU). But otherwise OK.

PixHawk Lite is 1Mbyte and has some pins swapped in connectors, you need to follow the rcgroups thread to get this one working. Better to avoid. Also does not have the resistor to drain the sensor 3.3V line. Once set up it works as well as most other.

PixRacer clones are stating to appear, 485 or so. Would probably be my choice today, or the 2.4.8 from BG.

Lat_Long RS I think the one you selected is very close to the one evaluated here: https://www.youtube.com/watch?v=4oBbBMa3M44

To Clone or not to Clone? Seems to be the bane of DroneCodes existence.

Putting anything into the air is all about mitigating risk. If your a young person, with little or nothing to lose, you don’t really care about safety or damaging other people’s property, it doesn’t matter to you that a lot of people in the community you supposedly care about are being taken advantage of, then buy a clone.

But if you want to be a responsible drone operator, want to come onto forums like this and others to ask for help, are flying a drone commercially then don’t buy a clone.

I don’t remember the comedian who had the jokes “You might be a redneck if…” But for us it would be something like “You might be an Idiot if…” add your favorite clone manufacturer to complete the joke.

Sorry for the Tongue-N-Cheek reply but to try and debate the efficacy of purchasing a clone on this forum not only makes us all idiots but hypocrites as well. The HobbyKing clone of the PixRacer is not just a clone, its a counterfeit controller. It is being marketed as if it were produced by the original manufacturer, even down to the fact that they call it the “Xracer” the working title of the board before it went public. It was brought to my attention that it even includes the identical silk screen with the AUAV logo on it. Plus its about the same price! Why would anyone buy, or justify the purchase of this rip-off?

The larger debate shouldn’t be about clone or not to clone, but why as an open-source community do we tolerate this? More importantly why does DroneCode tolerate it? So if and when AUAV takes their design and manufacturing elsewhere maybe HobbyKing and other cloners will step in to design and manufacture the hardware for you. That’ll be fun.

Maybe the joke should be "If you purchase a clone you might be an – Idiot, an A-hole, a hypocrite. [I’d like to use more colorful language but you get the point].

Here’s a though, how about if we simply try to support the people who are trying to support us?

It all depends on the understanding of what a clone is and what open hardware is. The bamggood or similar Chinese “Pixhawk” fc aren’t clones. They are one implementation of the open hardware for Pixhawk.
There is no possibility today to buy a Pixhawk fc that supports the developers, unfortunately.
For Pixracer that is another story.

Its one thing to take the open source gerber files and manufacture a “Pixhawk.” Quite a few Chines companies have done this with controllers like the PixFalcon etc… But they don’t call them a Pixhawk, they are at best a derivative. But its something quite different when they take the name, silk screen the originators logo and information on the board and imply that this is in someway an OEM PixRacer. That’s piracy, its a counterfeit.

There is a Pixhawk based board, that is certified by DroneCode to be compatible with the Pixhawk that does support the community and that’s the X2. Unfortunately with all that’s happened in the last year it seems to be lost in the shuffle.

Agree, except with the X2 that is not a V1 “Pixhawk” : different from factor, different connectors, impossible to identify which port is where (while it is clearly marked and visible on a Pixhawk). This does not make it a practical substitute to interface all of the components and cables made for the so-called original Pixhawk (telemetry units, GPS/Compass units, etc). Further X2 does not behave electrically like a Pixhawk, iot is not a 100% implementation of the electronics/electrical schematics.
I would hope for a Pixhawk like board that I could buy to support developers. Maybe an idea to pursue that could bring them some money ?