Your right, it doesn’t use the same crappy DF13 connectors, and although the case is not as neatly silk screened as the PH1 it is easy to determine the pinouts. Until 3DR imploded I used all of the original PH components (telemetry units, GPS/Compass units, etc). Now you just can’t get them, hardly the fault of AUAV.

AUAV is a DroneCode Silver partner. Not only have the sales of the X2 and PixRacer gone to support developers, over the past year they have begun supporting developers directly.

Here’s a thought, maybe if DroneCode and the open source community showed some brand loyalty and supported the hardware developers who are trying to support them then THEY could raise some money. The last controller this community had much success with was the Pixhawk, last time I checked it still took both hardware and software to make a flight controller and 3DR, or many other hardware developers, seem to be beating a path to the open source communities door.

So keep looking for that perfect Pixhawk replacement, keep buying clones and keep rearranging the deckchairs on the Titanic.

Well there is always jDrones who is THE One and only left from the original team. A member and developer from day -0 of multicopters@DIYDrones / 3DR. jDrones still support whole ArduPilot project every day in many ways and looking more ways to support it. It is still really close to our hearts as we have been there from the beginning.

As said, jDrones is the original creator of ArduCopter platform, it’s parts like motors, esc’s, powerdistributions, minimosd,… and a manufacturer of various other hardware’s. More is coming every day.

jDrones used to sell ArduCopter parts even before 3DR started to sell any, most parts that 3DR used to sell was initiating from jDrones operations.

Also jDrones is one of the founding members of DroneCode and a Silver member:

We used to manufacture APM 2.x boards and were planning to make Pixhawk 1 boards now we are working closely with Philip to make Pixhawk 2 boards on the market so most likely we will not make PH1 for now. If there is enough demand to make PH1, we will reconsider to make those original PH1 boards.

So there you have it. You still have a trusted partner that provides quality parts for all users around the world.

Ps. promoting is good sometimes so let’s have it here and now…

I just bought a Pixhawk “2.4.8” on banggood. I will let you know how it’s doing when i’ll receive it.

@maelito its not about single unit. Major issue with those clones etc is that you never know how and what you get on your next order. Sometimez they are wonderful and work as expected but then sonetime not.

Many clone supplier uses random low price components and you just cannot be sure when and what.

Just look like FTDI chip. There are origjnal serial chips with 8 usd, clone chips with 3. How user know if there is clone or original installed. They dont…

On the other hand, it is said that some of the newer Pixhawk models don’t have the 1MB memory limitation but that all the 3DR versions do and that 3DR might be winding down or have even stopped production of theirs so if you want to use future features going for a none 3DR might be the only way to use those options. IIRC version 2.4.8 is ok below that has the memory limit issues.

So i received my “2.4.8” Pixhawk and there was a major problem in my case : the connectors are not the same as 3DR ones so the Telemetry, GPS, Power module i had were not compatible.
They gave a 6pin to 6 pin cable and a 4pin to 4 pin connector that allowed me to change 2 6pin and 2 4pin …
Telemetry : 6pin
GPS : 6pin + 4pin for I2C
power module : 6 pin

Hopefully i bought 2 of them so i could change all the connectors but the fact that they don’t warn us about it is just not cool at all. They just wat the consumers to buy all the other hardware from their site…

I will make a flight or two this week so i’ll tell you how it’s flying but it seems to work perfectly/ same as 3DR Pixhawk at the begining.

I hope this will help some of you to anticipate

Can you post a link to the one you bought, my one has all the standard connectors, as do all my clones.

Here is the Link 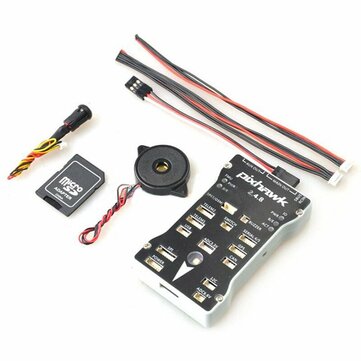 So, I did a first flight with this clone and it was not a success… The impression of stability i had with the 3DR Pixhawk is no longer here… At oneTakeoff it was very scary and i had to instantly react as you can see on that log graph :

Décollage DANGEREUX.png1048×433 9.76 KB
The landing gears have Ping Pong balls at their extremity and the takeoff was on a 1-2 centimeters cut grass.

I checked the versions of the Pixhawk 3DR i use to fly with are the same on my new Pixhawk :

Comparaison des versions dans les Logs entre nouveau et ancien Pixhawk.png785×83 4.03 KB
(From Logs of flights I had before and the log of today’s flight)

Here is a comparison of parameters I had on the Pixhawk 3DR and what i have on the new one : 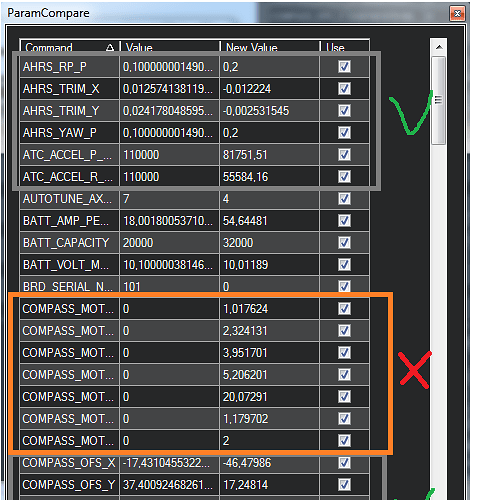 Comparaison des paramètres par rapport au Pixhawk 3DR.png477×2242 122 KB
In grey I put in relief the Calibrations that are not the same on the 2 Pixhawks so we don’t have to worry about these lines.

So I wonder if this event is due to the fact that I didn’t do the COMPASS_MOT calibration …
Because all the other parameters are not critical.
I would like to know if someone knows what does the SR0/1/2/3_… parameters are for ? they are not described in Mission Planner.

Excuse me for this long post. I hope someone could identify what the problem is

Without logs it would be difficult to know what your issue is.

Is this what you mean Jani ??

The connectors on the one in the link look to be standard Pixhawk so not sure why you are having issues with th connectors, unless you have APM peripherals as the APM has different connector sizes to the Pixhawk.

So Nevermind, the takeoff problem, i tried black sorcery but it didn’t worked as I planned (i setted PILOT_TKOFF from 100 to 0 and THR_DZ from 100 to 300 to takeoff in Alt. Hold as without props it responding weirdly)
Moreover Takeoff in Alt. Hold never shocked me with 3DR Pixhawk but now it feels weird (I think because of some parameter. 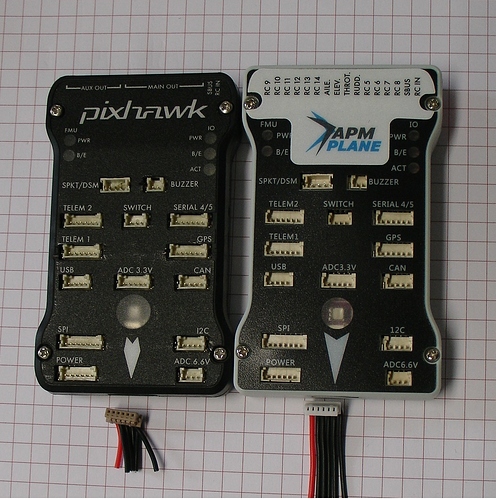 Yes. quite many Chinese company uses picoblades connectors or copy DF13 connectors as it’s difficult to get original Hirose connectors in china. They need to import those all and it’s expensive.

Need to be careful too as some connectors what they use looks like DF13 but their casing is opposite so your cable is also upside down and that can cause serious problems.

Ok so I purchased two PX4pilot’s from HobbyKing and I have been getting “Bad AHRS” warning when the pixhawk boots up. The warnings calm down after GPS lock. I also get the same warning during missions but they also seem to correct them selves as well.

I have just checked the Gyro chip and mine are marked with “AGD2 2333 JN3EB” does anyone have any idea if this is correct?

Depending on which firmware you used I got “Bad AHRS” a LOT even with 3DR hardware.

With 3.4-rcx I get it popping up randomly.

Never consistent, just pops up and goes away.

I have purchased HK auto pilots in the past with varying success.
I nailed the poor gyros when I left one connected to the GCS for a couple of hours while investigated why the “bad AHRS” was appearing, and when I came back to the GCS the artificial horizon was spinning like a top.
Video’ed it and got my money back.

Big T & Mike,
Thanks for your input. I’m using the latest stable build.
As it corrects itself and has no effect on the mission and I’m using a boat I’m not too bothered, not sure I’d feel the same if it was in a plane or copter.

I’m making the switch over from APM and I never had this with the 3DR APM 2.x.

Apart from that everything else works and the board looks to be of reasonable quality, similar or equal to products that I’ve bought from 3DR.

Well I spoke too soon. Yesterday I was trying to play with some params and from the moment I connected the batt I got a “Bad AHRS” warning that never went away. I’ll try reloading the firmware and see if I can shake it.