Pixhawk 2 transition from Altium to KiCAD

Hi, let me repeat my points on this topic:

I believe we can help Philip to make it truly OSH. We can spend our time to convert project sources to kicad or some other tool. And then ask Philip to check them and prepare for production. I know it will be challenging but we can do it. To try at least.

I made fork of pixhawk 2.1 repository and created a branch for transition to KiCAD.
Here it is: https://github.com/dipspb/pixhawk2.1/tree/transition-to-kicad
Everyone are welcome to participate. It could be a solution for OSH issue.

A promising start. I have no idea how good the Altium to kicad conversion tool is. Some pdfs of the schematics I would consider a first milestone. I presume it is possible to create pdf’s from Altium wheteher the converter succeeds or not?

I am not an Ardupilot dev, but I am not sure if it is a good idea to help others cloning it. For sure it will happen anyway, but the quality of the cloned versions will be lower and then the devs have to provide support for it and thus help the cloners who are not contributing in any way. And they get distracted from more important things - making Ardupilot even better and providing support to others. This is exactly what just happend with the Pixracer!

Personally, I don’t mind if the hardware is open or closed.
As far as I can see there is not much, if at all any, contribution from a commercial cloner.

Does it means the OSH (open source hardware) is bad idea in general? Does it mean any OSH developer will not success due to clones? And BTW, what are clones in case sources are open for everyone? What about the case clone could have not worse but better quality? Why developers should provide support as a company to users of clones? Are you sure they unable to ask “Give me pls your serial hash code pls” (exactly as 3DR did it refusing to support clones with success)?

If people too much concerned about clones, it will better for them to not go with OSH. But let me ask you one more question: would it possible to have pixracer or auav-x2 implemented w/o original pixhawk sources published under OSH terms?

IMHO business is not about fencing your design and hiding details in case you decided to go with OSH. It is about to be better than others in production, troubleshooting and improvement.

There are some issues definitely. Assistance from persons with good KiCAD experience is appreciated!
We need to list all types of found issues.

And no, OSH is for sure not bad in general. It is good. Maybe this is why we have the Pixracer.

But there is a difference between making money after developing a Pixracer and trying to manufacture it as good as possible - which results in a high price for customers and the “cloner” who is taking a finished design and just manufactures it at as low cost as possible, which results in a lower price for the customers but good profit for the cloner. And unfortunately, many many people will buy those cheap clones and end up on DIYDrones or here asking for help if there clone is not functioning properly.

It would be perfect if “It is about to be better than others in production, troubleshooting and improvement.” But at least the Pixracer example tells us it is obviously not the case. Which is a pity.

Isn’t there a way to make it OSH but keep cloners out who do not contribute back?

Thank you for your points.

Isn’t there a way to make it OSH but keep cloners out who do not contribute back?

IMHO, there is no way for truly OSH approach to prevent things like that. At my sorrow.
It is a nature of open source. Even a usage of expensive tools like Altium is unable to prevent cloning.

An example of conversion issue. Here is original P1 device from schematics pdf generated by Altium: 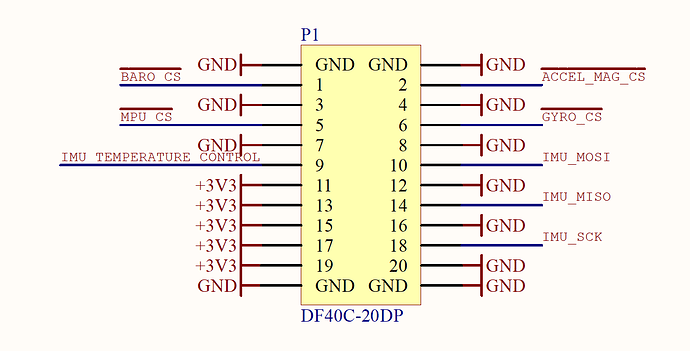 And here is converted P1 device in resulted KiCAD schematics:

Also all devices and drawings looks bad aligned on a grid.

I suspect that although the Altium to Kicad tool is a good idea in theory, that in practise the fastest way to do this would be to create pdfs and then to create the KiCad schematics manually.

your points are Valid. And its conversations like this one that truly make me question my licensing choices.

the PixPacer is a great example.

Phill K did an awesome job bringing that to market… but it was just directly copied by hobbyking… how does Phill profit out of that.

by making our stuff open, we allow people to take inspiration from our work… so someone who is designing a different bit of hardware, can grab concepts without having to reinvent the wheel

the intention was never to create bulk wholesale copies of the hardware, and send the legitimate manufacturers broke.

people need to ask, seriously… Would you if you had the funds, invest in a product that gives you no competitive advantage, that you need to support, design, test and prove, then be happy when someone can start copying without risk or R&D costs?

So, I can assure you,if this effort is just to assist a clone manufacturer… my next product will be closed source…

However, if this effort is genuinely for developers to be able to support the project, then I am cool with that.

any software conversion requires cleanup. that is normal

people need to ask, seriously… Would you if you had the funds, invest in a product that gives you no competitive advantage, that you need to support, design, test and prove, then be happy when someone can start copying without risk or R&D costs?

So, I can assure you,if this effort is just to assist a clone manufacturer… my next product will be closed source…

Must be some way to control this OSH
Why do you think it will be different than last time with Pixhawk…
Give everybody who buy original from you or dealers a PIN number…
PIN is than ok for forums,software,updates,etc…Others can pay contribute to developers and get PIN as well…Amount should be something acceptable for all,lets say 15-20$…

HI, a project with Kicad https://github.com/radioelf/DronPi …

I am just hopeful that people can see what happened last time, and the disruption it caused.

If people want to create cool stuff, there is room for better external sensors etc…

I cannot understand why FC manufacturers keep creating opensource hardware, is it required because it’s a derivative of a opensource pixhawk? It seems a lot of these new boards (pixracer, pixhawk2 etc) are fresh designs and can live on their own license, just because they use compatible components doesn’t bind you in to previous licensing does it?

It’s very clear that opensource hardware is killing the real designers and manufacturers of this hardware, and I don’t see the benefits of it being opensource - the contributions are relatively tiny, no? I would personally far, far prefer you to produce closed hardware and have a sustainable business model for the future. It would create better true competition between the hardware manufacturers rather than the chinese cloners printing cheap copies from design files with scant regard to QC with whatever random components are available that day and putting the real brains out of business. It’s the software/firmware that is important to be open, not the hardware.

@dipspb - has Philip asked you for any of this ‘help’? He’s already stated Altrium is his tool of choice for many years. This is his hardware, his product, it’s up to him to use whatever he wants.

@proficnc are you wishing now to withdraw your CC-BY-SA-3.0 licencing of the Pixhawk 2 hardware?

@fnoop As far as I understand it this is not just the work of one person. Here is the text on Proficnc site:

http://www.proficnc.com/content/10-about-us
"The Pixhawk 2.1 grew from the Pixhawk Hardware Project. this project was a group effort by the PX4 and Ardupilot teams, with the support of 3DRobotics"

"You are free:
to Share—to copy, distribute and transmit the work, and to Remix—to adapt the work
Under the following conditions:

Attribution—You must attribute the work in the manner specified by the author or licensor (but not in any way that suggests that they endorse you or your use of the work.)

Share Alike—If you alter, transform, or build upon this work, you may distribute the resulting work only under the same, similar or a compatible license."

If you don’t like the licence, dont use it, but then dont have the OSH logo emblazoned all over your site and all over the advertising and documentation.

Wow! Opensource Software & Hardware, thank you thank you, without Linus Torvalds and Richard Stallman I wonder what this forum would be served on, let alone how so much other hardware and software around the world might operate, what a different world it would be.

My first flight controller was the Aduino Mega and then a friend bought me a Pixhawk clone, now we have the soon to be released Pixhawk2. And still open source, thank you proficnc

I will be buying from one of your regional suppliers close to me.

Open Source grows the makers market, it gives everyone who has the skills to develop tools and toys. We will be using it to further develop a uav that will be built alongside arduino monitoring hardware in a high school environment.

Thankfully there are still a very large number of people whose philosophy supports an open planet model.

I downloaded it and it opens OK in my KiCad. The .sch file is text and can be opened in an editor. You can search replace the wire labels for example.

There is a crib sheet here docs.kicad-pcb.org/stable/en/eeschema.pdf
You can get an underbar on wire labels by preceeding the texte with a tilde. Just tested. It works

Altium to Kicad tool is a good idea in theory, that in practise the fastest way to do this would be to create pdfs and then to create the KiCad schematics manually

Agree, it could be the best approach. This way we have to wait for complete schematics pdf to be published.