Thank you, I have the rngfndr working now.

I do have one more question: How do you arm GPS2?

Sorry it took so long for me to reply. Computer went down…

I looked at the instructions, but they don’t apply to Pixhawk 2 Cube as it has a GPS2 port.
I’m also using the “HERE” GPS units

I believe one of my BLHeli 40A esc’s is faulty, so I will replace that today. (it’s stuck in fw/reverse and I cant seem to factory reset it)

Ok, now my rangefinder is offline.
I’m using Mission Planner v1.3.48 and my copter is v3.4.6
i keep getting messages like “Set RNGFND_TYPE Failed” because the options only go to 12.
Is there a newer version of Mission Planner and/or copter version?

I really appreciate the help!

You can flash the FC with a Beta 3.5 using Mission Planner

Thank you,
I have v3.5, I just dont know how to install it. Sorry for my lack of knowledge on this topic.

I recommend you read this excellent wiki : http://ardupilot.org/planner/docs/common-loading-firmware-onto-pixhawk.html

Will do! Thank you so much for your assistance and knowledge!

Ok,
I have the v3.5 downloaded from here: https://github.com/ArduPilot/ardupilot/releases/tag/Copter-3.5.0-rc7
but I cant find any tools to import it into MP. Do I need to place the v3.5 firmware in a folder in mission planner?
Also, the latest version of mission planner does not have extended parameters like the previous version.

You can choose load custom firmware and point to the downloaded files or easier , just click on Beta Firmware 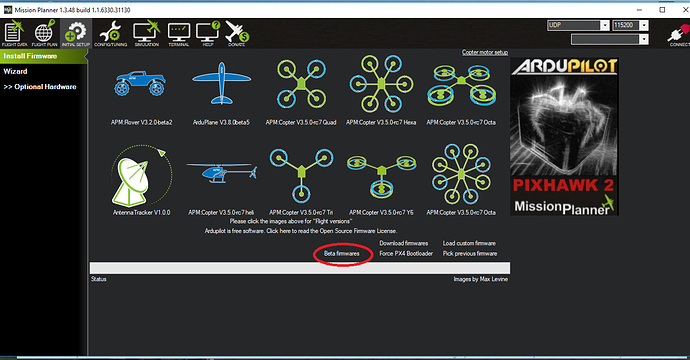 I have to install an older version of mission planner. That button is not on my screen.
working on it now 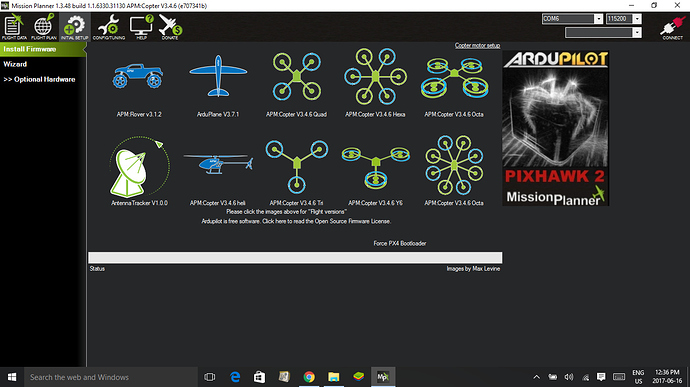 That did the trick. Thank you!
Now I need to find out the ports on the Pixhawk2
There is:
GPS1
GPS2
Telem1
Telem2

Oh, I’ve got the Lidar Lite working now.
Just trying to figure out what serial port GPS2 is.

I’ve also got a throttle below failsafe error…

Hi Graham, did you found the reason of here gps turning off?

no, not yet, sorry
I’ve figured out several other problems. I’ll keep trying