Hey, I just glanced over at the dev chat and saw you asking about the gps accuracy check.
I don’t know much about the code, but I get that too, and it’s when I think I’m possibly getting multipathing issues, or some other problem w/ my gps reception.
I’m not sure, but if I’m sitting on the ground below a tree canopy, or behind my house, I might have a high number of sats and low hdop. But, in my GSC, it looks like my copter is moving all around over a relatively large area (drifting around a 5-10 meter area).
I think that check is seeing the GPS move, but not sensing any movement on the gyros, and EKF is confused about what’s going on.
I know that once my copter finally appears still for several seconds, I can then arm.

Oh, I see someone else already answered there.

What I’d like to know is what causes the GPS to act this way. Like you, when this happens to me all the status info I have available from the GPS looks great. Other than the fact it’s drifting all over the place. I always have this problem around my home, which is my main testing area. Much less issues w/ it in other areas.

frankly i am not sure. as when i get to logs and get list of all gps coordinates sent by gps and recorded - i did not see any movements, it was a steady stream.

i suspect, again - on any vehicle there are multiple sources of interferences - noisy BECs, esp8266 board, now i found out that runcam split board is a big offender too - so gps receiver gets affected. but, on the model i dealt with it all was taken care of, and i had gps glitches recorded while in the air with 15 to 17 sats connected to, it simple seemed counter intuitive to me. and most times i saw that glitch condition to be generated at same time when count of sats changes - usually in the down direction, but, sometimes it was on up direction, that was even less understandable - why a glitch if i got more sats and lower hdop?

Can you do anything about the runcam split interference other than moving the gps further away?
Does power filtering help?

I’m building a 120mm size copter, and will likely have some issues.

I’ve flown a 250 size arducopter for years, and am used to dealing w/ the issues of a small vehicle… But now I’m at about 1/2 the size of that. I’ve got a GPS working on a 120 size copter in betaflight, but its use of the GPS is not precise, and I doubt it has any arming checks.

i can only think that powering runcam from an external 5v BEC should improve the situation, but i do not have it on my model now, an other BEC, is it all driven by F7 AIO kakute. its 5V has 2A limit and i already have several things on it, so, cannot use it for runcam and camera power.
what i found actually helps is this trick - to get that metal shield mounted on top of the runcam board.

what 120mm frame you going to use? most of those use 20mm stacks, and usually grow up vertically - so, it actually may be easier to deal with than this slim flat chameleon frame i have here.

On my 210 I located the Power Module/PDB under the lower plate and then added a plastic “bash plate” under it for some mechanical protection. Just a thought! 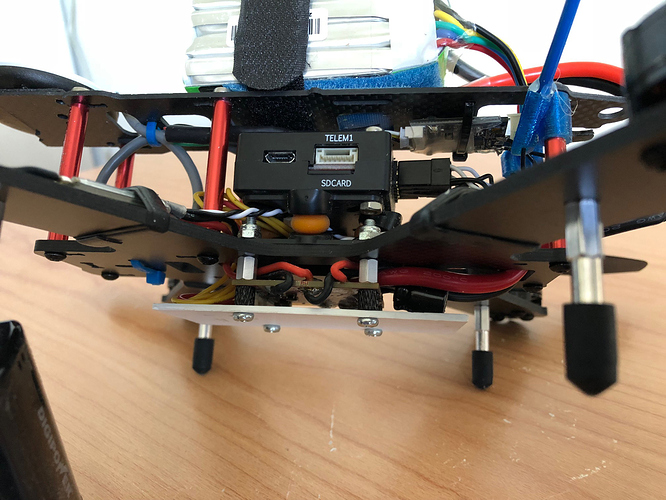 I’m going to try this frame:

FlexRC Ascent X 3" Light edition is an ultra light 3" X frame designed to offer amazing performance and flight characteristics on 2s battery. It is one of the fastest 2s setups on the market which will offer you safe fun in any location you would...


It’s not ideal, but I’ve been using a similar one w/ betaflight… (And FlexRC gave it to me for this project)

I have a ‘long range’ betaflight setup with 2.4ghz video, TBS Crossfire rc radio. I get about 10 minute flights if I’m going slow. The only thing I’ll have to add is a compass. (I ordered a small GPS/Compass combo)
This pic is pre-GPS, but it’s just got a tiny 20mm gps taped on top now for betaflights new rescue mode.
And, I did have to fight w/ interference w/ my video in this copter, and ended up using a separate regulator and a few capacitors (pre and post regulator).

just as a thought - are you sure you really need gps/arducopter kind of a brain on a 3" model? i would just put betaflight on it, with gyro alone. if really needed for RTL - betaflight now can speak to gps as well and, sometimes even make it back in rtl mode.

speaking of which - i really want to try this one on something similar in 3" size.

We finally have the Emax Mini Magnum 2-6S 20x20 Stack! This amazing space-saving stack is the best 6S option for your 2-3" quads. Order today for fast, free shipping from the USA!

I know, and I have tried the new GPS mode in BF.
It’s more for the challenge, I guess…

And, I live in a fairly dense area. There’s a park behind me, and another a block away from that, but I still end up flying over peoples houses, and sidewalks (I try staying over peoples front yards when I’m flying towards the parks). I don’t like flying my larger copters here. And so, it will sort of be a test platform where I can play w/ different auto missions and various arducopter things, w/out having a heavy drone up in the air.
Then I have more confidence when I take my bigger copters out in the country.

sort of be a test platform

that is quite a good point - i actually use this 7" chameleon for this, but i can see where 3" is easier to deal with. but, i do think for both compass and gps accuracy it will be a challenge to mount it well.

so, one way or another - i can confirm 100% - runcam split 2 sucks big time and it causes an interference with gps. i mounted 2 sensors onthe model - waited for a while having one sensor jumping from 6 to 5 sat, other one not getting anything at all. then i simply turned off split - using its own power button, long press.

Urg, thanks for the update. The only other option for HD recording (that I know of) for these micro’s is the mobius mini, and I’ve read the same thing about GPS interference.

-little OT, I tested tbs crossfire w/ arducopter this morning, and it works great! At least around my yard. One tiny receiver for both telemetry and RC control. So, that’s one step closer to the micro arducopter.