OpenSolo Initiative - by the ArduPilot Team 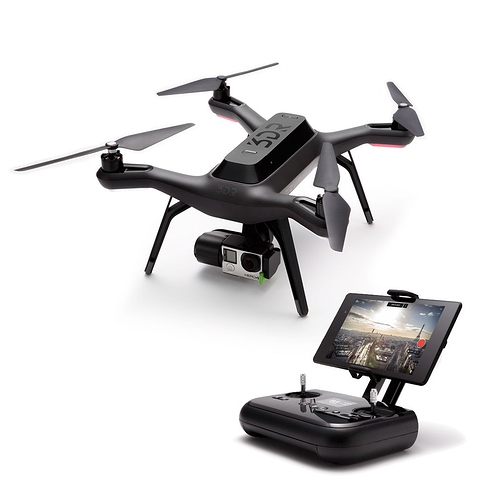 The ArduPilot project is pleased to announce the creation of a new initiative, “Open Solo”. This work is made possible by 3DR’s recent release of the SoloLink codebase to the Open Source community, and by the ever-ongoing work by the ArduPilot and Solo communities behind the scenes.
3dr’s press release is here: https://3dr.com/blog/announcing-opensolo/

The benefits to existing Solo users are many; the community is now free to maintain and improve upon an established codebase containing many innovative technologies, and developers will be able to “hack” or improve nearly every part of their Solo from now on, including the Controller! The Open Source community in general will also benefit from more generally applicable technologies such as SmartShots and the Artoo controller.

Background
The OpenSolo github repository (http://github.com/OpenSolo/) contains fresh git repositories based on the source code released by 3DR. We’ve made some initial commits into these repositories that are sufficient so that we’ve got the released source code to build binaries for us.

How we are running things?
OpenSolo is a completely volunteer-run community that’s currently being shepherded by the ArduPilot Developer Team during these early stages. The ArduPilot Developer Team have Gitter channels and Mumble meetings like many open-source communities. If you’re not already involved, we’d love you to join us, and if you are, thanks! http://ardupilot.org/copter/docs/common-contact-us.html
http://ardupilot.org/dev/docs/ardupilot-mumble-server.html
https://gitter.im/ArduPilot/OpenSolo
We also love that the Solo community (especially on FaceBook) itself has a great collection of engineers/devs/beta/users, and we acknowledge there has been a lot of work behind the scenes by the Solo community in getting us to this point. This source code is free because of your actions, and we would welcome all of you to take the next step and hack on these OpenSolo repositories with us.
Here’s some links if you don’t already know who we’re talking about:
https://www.facebook.com/groups/3DRSOLOModClub/
https://www.facebook.com/groups/3DRSOLO/
https://www.facebook.com/groups/pixhawk2/

Shape
As an open-source community, we are in the very early days with OpenSolo., We have only had access to the codebase for around a week, but there are a lot of goodies here, and a huge opportunity for those of you with Solo’s who are also software developers to get involved in making Solo awesome! For everyone else, we’ll be hoping to get your Solos flying on this new-improved codebase as soon as we can!

What’s Missing / Future
3DR have indicated they are willing to release what they can of the gimbal source code.
3DR have also indicated they are not opposed to the idea of releasing what they can of the Android/iOS phone Apps, but are not yet ready to guarantee this.
Improvements to documentation on how to understand, modify and build the code.
Fly Solo on this code! While Solos have been flashed with the build products, an initial test flight has not yet been done.
lots of future enhancements, such as mavlink2 support, ongoing support for the “Green Cube” Solo mod, new smartshots, merging APSync with Solo.
we hope to allow a nice simple upgrade path from traditional Solo to the current latest OpenSolo+ArduPilot, that shouldn’t involve hassle for the user/s.
Solo’s built-in companion computer can support advanced features like ROS and has build-in wifi and video, so is a great starting point for researchers and others in need of a flying computer.
merging some of the customised forks from 3dr back into mainstream ( dronekit, mavproxy, ?)

Awesome news!
Jump on in guys!!! It’s never been a better time to own a solo!!!

Best news i have heard in a long time

Extremely good work of all of you behind this, respect.

The Quick start link gives a 404, but probably not up yet …

Awesome blog post! This day has been a long time coming!

This is awesome news. Great work to 3DR and all you ppls keeping the development alive. And… Not that I needed it but this certainly helps me justify buying 4 spares

And more news… Peter has just flown his OpenSolo! We even have some shaky phone-video evidence of it.!

3DR are obviously the “good guys”

Both the Artoo and Solo part tested ?

This was a stock Solo, near-enough (actually a PVT model). Ground-lift
bug and all. No gimbal on it.

This wasn’t ArduCopter 3.5; this was ArduPilot master, which has moved on
a bit since Copter 3.5. Nothing particularly relevant has gone into
master, 'though. We’re planning on pointing the OpenSolo build process at
Copter 3.5.1 at some stage.

This is awesome news! Many thanks to 3DR for their very generous donation to the open source community. (working code doesn’t come cheap!) And thanks to all the people here and elsewhere that worked to make this a reality.

Personally, I’ve been in “hacker heaven” going through all the code. It’s fascinating to see how it all fits together, and there are some really cool ideas in there. It’s been a great opportunity for a hack like me to learn more about how you design this sort of system.

Same thing for goes for ArduPilot, BTW - I’ve learned a ton about flight control by working to understand ArduPilot. All of your hard work has resulted not only in a very useful FC, but a fantastic educational opportunity as well.

You can count me in as a tester if we’re talking about running this on Stock Solo. Ready to go.

Lance… we’ve already had at least two flights with ‘stock’ solo cube, but the hardware guys say that any sudden throttle or yaw changes might cause your escs to de-sync… so we’ve been keeping it low and over soft things.

This is good news. I love flying my Solo. It sounds like the software/firmware side of the Solo will be covered, but what about the hardware? Has 3DR licensed or sold the rights to make the hardware? Specially batteries, gimbal, motors, esc, props etc.

+2 on the above question. I hope with all of the above source code being released that you guys can make a much easier way to upgrade to Green Cube. I am an iOS user and toms sidepilot is not 100 percent yet. I cannot upgrade yet kinds stinks

This will make the Green Cube upgrade much easier. I’m working on an update package that will install just like the “normal” updates you could get from 3DR. It will be a complete file system update with all the necessary bits including ArduCopter 3.5.x. And there will be a golden image (factory reset) update to make that compatible.

2 Likes
next page →
Servers by jDrones