I noticed something weird was going on when I was testing the drone on the first flight test.
I noticed that it lifted from the left side, but the right side stayed on the ground. After going through Mission Planner and testing the motors individually I could see that the CW motor from the bottom left will lose speed after a few seconds. If I move the throttle higher then it peeks up the speed, but then loses it.

I don’t know if that is the problem as to why the drone didn’t take off properly or maybe there is some parameters/configuration that was set wrong.

I tested it without the motors in Motor Test. One of the motors is not spinning now and it’s twitching even at full throttle.
When I tested it with the props before I did it without strapping it down in an open space to see if it flues. However, even almost at full throttle (like 85-90%), it didn’t want to take off, but only the left side lifted (even the motor that is not turning now was working then, but still twitching).

So, now after connecting to Blheli I’m getting this error when I first click on Read Setup. 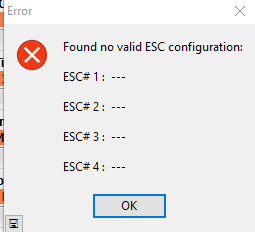 After clicking Read Setup a second time I get this, 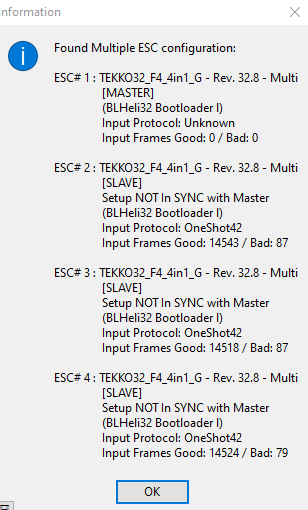 You can see one of them says Unknown and the other three say OneShot42, which is not what I chose for the parameter in Mission Planner (I set Dshot300 as the MOT_PWM_TYPE).

I set Dshot300 as the MOT_PWM_TYPE

Did you set the other parameters required? 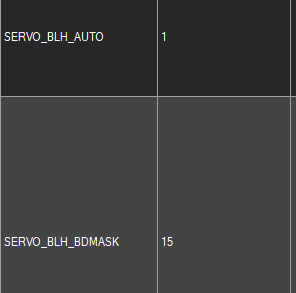 Okay, I did switch it to Dshot600.
Although, I tried re-flashing the FC to an older version. The motor is now spinning, but it still twitches at the beginning and then picks up.

Now, the problem is that when I push the throttle up, the backside is lifting and the front is not.

If the motor order is correct and the imu orientationis also correct, you can safely ignore that

Now, the problem is that when I push the throttle up, the backside is lifting and the front is not.

All to often how Mission Planners Motor Test Order is misunderstood. Just to be surer when the A-D buttons are pressed these motors run in the indicated direction… 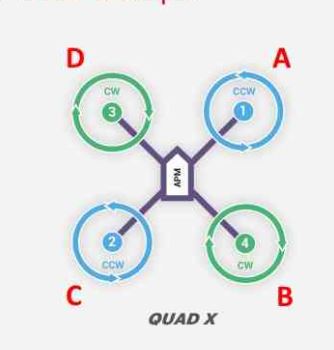 They are correct. I tested the motors in FailSafe to see the orientation. So, the same motor is not spinning again. It’s the top right (CCW).

Yes, they are exactly like that and when I tested them they do work in the same order and rotation.

In Motor Test. I don’t know what you mean by testing them in failsafe.

I meant that in FailSafe, I tested the motors to see the yaw/pitch/roll/throttle direction. If I push right, motors on the left side should speed up and the right ones should slow down a bit.

Did you test them in MOTOR TEST? I can’t tell you how many times people have said “I triple checked” and they still got it wrong.

I understand completely, but I’m 100% sure about it.

https://drive.google.com/file/d/1-ooC7cuz--QNqNmcdUd64qAHHVMJUO9u/view?usp=sharing
Here, is a short video you can see for yourself that the motors are in the right place and have the correct rotation.

Which flight controller is that and what is the front of of the quad relative to the USB port on it?

And those wore splices have to go. All soldered connections on motor leads.

The front is towards the two red legs. You can actually see it (the arrow) in the FC towards the end when I zoom in. The FC is a Kakute F7 mini. The motors have bullet connectors, so I had to use these in order to connect them and solder them into the ESC.

Hard to tell but it looks like Motor 4 (Right rear) is turning CCW, Motor 2 (Left Rear) is turning CW and Motor 3 is correct. Don’t know about 1 it didn’t rotate. If you say that they actually are rotating in the direction shown in the above illustration I’ll say no more about order/direction.

Cut off the bullet connectors and solder the wires then heat shrink. It’s the only way to build. After you confirm the motor direction is correct of course. You can reverse the Motors in Arducopter or BLHelisuite but that assumes they are working correctly with Dshot.

I see. So, just soldering them without the bullet connector makes a difference?
Actually, I did switch the connections between motor 1 and motor (Right rear), and the same thing is happening to that motor. Does that mean that there is something wrong with the ESC?